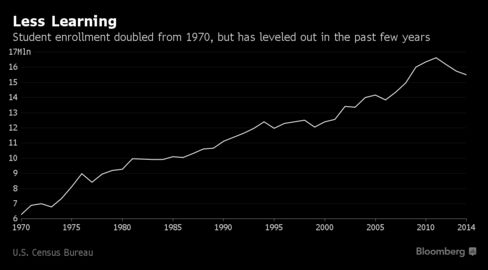 For decades, a growing pool of college graduates poured into the U.S. labor market, boosting productivity and shaping Americas status as the worlds dominant economic power.

That driver of growth is diminishing. Enrollment has declined every year since peaking in 2011, according to the Census Bureau and the National Student Clearinghouse Research Center. The reasons include an aging population, rising tuition costs and a healthy rate of hiring that lessens the demand for learning.

Lamenting the end of the so-called productivity miracle are Federal Reserve officials and economists more broadly, who hailed its ability to allow faster growth without harmful inflation. Now, central bankers largely powerless to fix the schooling slump say something must be done to counter it to prevent a new era of weaker growth.

As a society, we should explore ways to raise productivity growth, Fed Chair Janet Yellen said last month at an economic symposium in Jackson Hole, Wyoming, adding that its worth considering improving our educational system and investing more in worker training.

Among the most noticeable consequences of weaker college enrollment is lower wages. Higher education leads to better-paying jobs — graduates, on average, earn about 90 percent more than non-graduates, but only about a third of Americans get degrees. Workforce quality, which along with technology, helped American employers boost productivity in the 1980s and 90s, now appears to be contributing to anemic efficiency gains that could continue.

Slow growth in educational attainment is one of the headwinds, said Lawrence Katz, a Harvard University economist who was the U.S. Labor Department chief economist in during Bill Clintons administration. The quantity and quality of schooling are important issues for direct effects on productivity — more educated workers are more productive — and for indirect effects on the pace of innovation and adoption of new technologies.

Katz estimates the direct impact of less-educated people joining the workforce has the potential to reduce productivity by 0.25 percentage point a year, and create snowballing indirect effects that hold back innovation.

Productivity as measured by employee output per hour has fallen for three straight quarters, the Labor Department reported last month. Productivity growth has averaged 0.4 percent since 2011, after averaging 1.9 percent in the 1980s and 1990s.

Darrell Jackson, a 31-year-old in Atlanta, says having just a high-school diploma probably closed doors for him in the job market. Jackson said hes applied for about 50 positions and landed no interviews in the three weeks since losing his job as a parking garage maintenance worker. Hes now considering an online training program to boost his skills.

For physical labor or general labor, education doesnt really play a part, he said. But if I did have a better education, I could have better job offers and probably compete a little bit more for jobs.

Higher education has become an issue in the presidential campaign. Democratic contender Hillary Clinton has proposed eliminating public in-state tuition for students whose families make less than $125,000 annually. Donald Trump has called student debt a tremendous problem” and indicated that he wants to raise the quality of education.

In economic theory, the lure of a salary premium should attract an ever increasing number of young people to go to college, with the promise of careers that pay generously. Thats largely what happened over the past 50 years, and the retirement of less-educated older workers and the entry of more-educated youngsters into the job market had the effect of upgrading the workforce skills.

Economists including Harvard Universitys Dale Jorgenson are starting to explore the recent shifting landscape of higher education. The economics professor predicts that the average level of education for U.S. workers — the most important determinant of labor quality — will no longer continue to rise in the U.S. Educational attainment will gradually disappear as a source of economic growth, he wrote in July in a National Bureau of Economic Research paper with two co-authors.

To be sure, the U.S. still has one of the most highly educated workforces in the developed world even as university study isnt an option for everyone. Many students attend two-year programs or vocational training, drop out before completing degrees or end up with jobs that dont require a college education. Only 60 percent of college students in the U.S. completed a four-year degrees within the six-years through 2014, according to the National Center for Education Statistics.

People have very diverse experiences and the decisions not to attend or to drop out may be absolutely rational, said Yongseok Shin, a professor at Washington University and a research fellow at the Federal Reserve Bank of St. Louis.

But for many college students, their focus is on the economic payoff. Melisa Menkovic, who is a senior at Georgia State University in Atlanta, said her education has given her a leg-up in the labor market already. Shes accepted a job in her field of study in accountancy and finance after graduation next May.

We are seeing job postings everywhere, said Menkovic, 21. There are lots of opportunities.

Watch Next: Millennials, Don’t Worry. You’ll Be Able to Retire.

Trumps Health Chief Wants to Change How Doctors Do Business