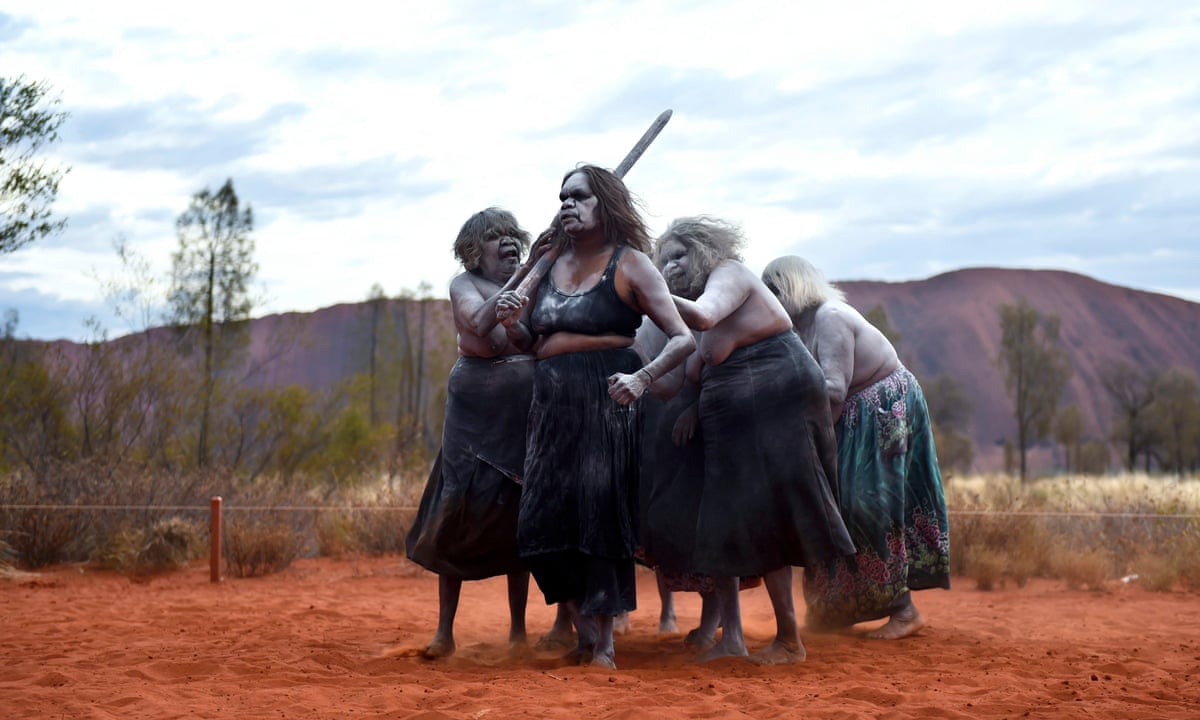 Social technology, in the words of Facebook founder Mark Zuckerberg, would make the world more open and connected, and unite the international community. It promises a new, global platform for cultural storytelling a significant opportunity to know one another better than ever before.

But major technology platforms are led by western capitalist ideals, and one major consequence of this is that not all stories are treated equally. On Facebook, stories and images of famous womens nudity are celebrated while the cultural histories of other women around the world are erased as inappropriate.

According to the social networks content policy, a photograph of a sun-browned Kim Kardashian stretched glamorously across a desert landscape, streaked in white body paint that covers her nipples, is an appropriate header image for Esquires piece on the body-shaming furore that often chases the star. But a photograph of topless Aboriginal women wearing ceremonial paint as part of a protest violates community standards, according to Facebook.

On the recent International Womans Day, Arrernte feminist writer and activist Celeste Liddle gave the keynote address at the Queen Victoria Womens Centre in Melbourne. She spoke about the challenges of her upbringing in Australia, as well as those that women in Aboriginal communities still face among them, a white Western-centric lens on feminism that does not account for international or multicultural voices.

In her talk, published in full at the New Matilda, Liddle describes being banned from Facebook four times for sharing a trailer for an Indigenous comedy show that featured images of topless desert women. Trolls kept reporting the content as indecent, and Facebook kept removing the trailer and locking Liddle out of her account.

If thats not outrageous enough, Facebook has also suspended the accounts of users who shared the coverage of Liddles speech, because the article contained the offending image. And during International Womens Day, while nude images of Kardashian proliferated in protest of the shame that still overhangs womens bodies, Liddle herself endured a 24-hour Facebook ban.

My ban is because Ive previously published images of nudity. Im apparently a repeat nudity poster offender, she told the New Matilda. I feel decidedly smug because everything I spoke about in my speech on this particular topic seems to have been proven completely true.

Javanese feminist Dea Basori has been attempting to collect and share images depicting Indonesian women in history, to explore and educate people about evolutions in that countrys values. She too saw herself banned from Facebook, and when she appealed the decision, adjudicators apparently insisted her cultural photography collection was nudity that did not suit Facebooks acceptable definition of history. Although her account has since been reinstated, her experience is another unacceptable example of inappropriate western values.

As much as [Facebook] vouches for openness, it doesnt recognize culture, Basori told me. This is quite sad, because Indonesias society has changed a lot in the last 10 years because of the lack of education systems in the country.

Basoris hope is that information, education and technology can combat ignorance and religious oppression alike. She fears increasingly-prohibitive attitudes towards womens expression in her country, and using social media is her means of response: Im trying to educate people on what is deemed as traditional, and to increase the awareness of what our ancestors society was like before, she says.

Facebooks policy should be able to distinguish between cultural nudity and sexually explicit content. If the appearance of a womans nipple constitutes nudity, then its very sexist to only censor womens nipples and not mens as well.

Many women have protested the idea that womens nipples are considered sexual by social media platforms like Facebook and Instagram, while mens are not. The Free the Nipple campaign describes itself as an equality movement, and women encourage one another to pose topless in protest of censorship, double standards and body-shaming. Facebook was contacted for comment.

But the campaign seems to sidestep cultural issues, rooted in nothing deeper than a marketing hashtag for a movie, and has attracted numerous celebrity women most of them white. Writer Tatenda Musapatike called it one more instance of how a wealthy, and often white, brand of feminism has detached itself from those who need the movement most.

Unfortunately, shes right. Of course we should be able to use social networks to protest puritanical views about womens bodies. And we need to defy the idea that the only acceptable images of women are those selected to suit the male gaze, or that men (or tech firms!) can be the ones to decide whether our nipples are sexual or not. But campaigns like Free The Nipple arent yet helpful to women like Celeste Liddle or Dea Basori doing important feminist work in the public sphere.

Justice for women cant belong only to a few of us we must also be able to use our networks to protest western-centric ideals that prize some values over others, that relegate cultural storytelling to sexual content, and that silence women from speaking on their own national histories.

These policy failures on the part of social networks represent an insidious Western imperialism where a tech platform gets to determine, in its own favor whose stories are worth telling, and whose are offensive.

Facebook should abandon its censorship of Indigenous and non-white people and cultures, and re-evaluate its policy on womens bodies no matter where theyre from.