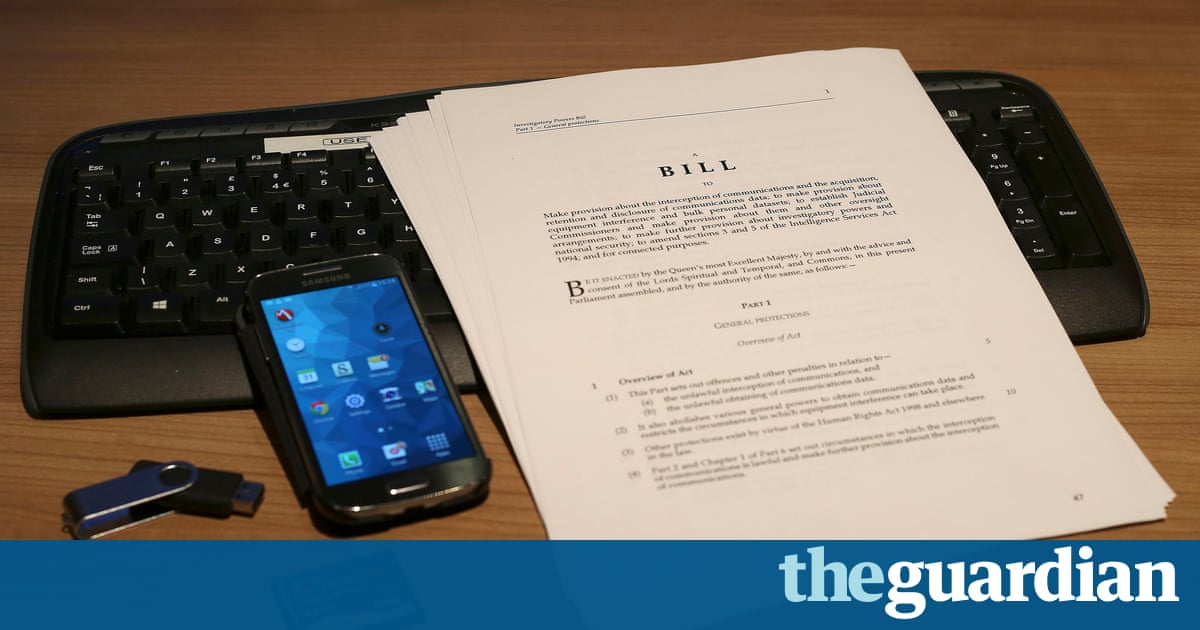 A bill giving the UK intelligence agencies and police the most sweeping surveillance powers in the western world has passed into law with barely a whimper, meeting only token resistance over the past 12 months from inside parliament and barely any from outside.

The Investigatory Powers Act, passed on Thursday, legalises a whole range of tools for snooping and hacking by the security services unmatched by any other country in western Europe or even the US.

The security agencies and police began the year braced for at least some opposition, rehearsing arguments for the debate. In the end, faced with public apathy and an opposition in disarray, the government did not have to make a single substantial concession to the privacy lobby.

US whistleblower Edward Snowden tweeted: The UK has just legalised the most extreme surveillance in the history of western democracy. It goes further than many autocracies.

Snowden in 2013 revealed the scale of mass surveillance or bulk data collection as the security agencies prefer to describe it by the US National Security Agency and the UKs GCHQ, which work in tandem.

But, against a backdrop of fears of Islamist attacks, the privacy lobby has failed to make much headway. Even in Germany, with East Germanys history of mass surveillance by the Stasi and where Snowdens revelations produced the most outcry, the Bundestag recently passed legislation giving the intelligence agencies more surveillance powers.

The US passed a modest bill last year curtailing bulk phone data collection but the victory of Donald Trump in the US presidential election is potentially a major reverse for privacy advocates. On the campaign trail, Trump made comments that implied he would like to use the powers of the surveillance agencies against political opponents.

The Liberal Democrat peer Lord Strasburger, one of the leading voices against the investigatory powers bill, said: We do have to worry about a UK Donald Trump. If we do end up with one, and that is not impossible, we have created the tools for repression. If Labour had backed us up, we could have made the bill better. We have ended up with a bad bill because they were all over the place.

The real Donald Trump has access to all the data that the British spooks are gathering and we should be worried about that.

The Investigatory Powers Act legalises powers that the security agencies and police had been using for years without making this clear to either the public or parliament. In October, the investigatory powers tribunal, the only court that hears complaints against MI6, MI5 and GCHQ, ruled that they had been unlawfully collecting massive volumes of confidential personal data without proper oversight for 17 years.

One of the negative aspects of the legislation is that it fails to provide adequate protection for journalists sources, which could discourage whistleblowing.

One of the few positives in the legislation is that it sets out clearly for the first time the surveillance powers available to the intelligence services and the police. It legalises hacking by the security agencies into computers and mobile phones and allows them access to masses of stored personal data, even if the person under scrutiny is not suspected of any wrongdoing.

Privacy groups are challenging the surveillance powers in the European court of human rights and elsewhere.

Jim Killock, the executive director of Open Rights Group, said: The UK now has a surveillance law that is more suited to a dictatorship than a democracy. The state has unprecedented powers to monitor and analyse UK citizens communications regardless of whether we are suspected of any criminal activity.

Renate Samson, the chief executive of Big Brother Watch, said: The passing of the investigatory powers bill has fundamentally changed the face of surveillance in this country. None of us online are now guaranteed the right to communicate privately and, most importantly, securely.

Trumps victory started speculation that, given his warm words for Vladimir Putin, he might do a deal with the Russian president to have Snowden sent back to the US where he faces a long jail sentence. Snowden has lived in Russia since leaking tens of thousands of documents to journalists in 2013.

But Bill Binney, a former member of the NSA who became a whistleblower, expressed scepticism: I am not sure if the relationship a President Trump would have with President Putin would be bad for Snowden.

In Russia, he would still be an asset that maybe Putin would use in bargaining with Trump. Otherwise, Snowden does have a large support network around the world plus in the US and Trump may not want to disturb that. Also, I think any move to get Snowden out of Russia and into US courts would also open up support for at least three other lawsuits against the US governments unconstitutional surveillance.

How to survive the fake news about cancer

No joke: have China’s censors gone too far with ban on humour app?