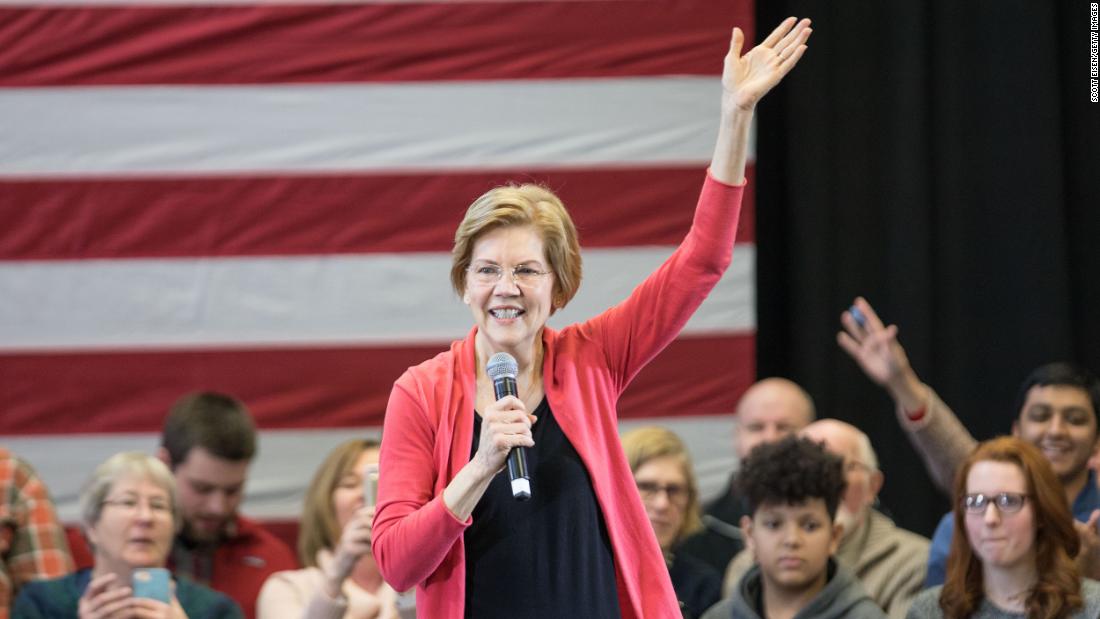 (CNN)Sen. Elizabeth Warren is proposing a new tax on Americans with assets of $50 million or more as part of a bold new initiative to reverse the increasing concentration of wealth among the country’s richest households.

The proposal is among the first and most detailed steps taken by a top-tier Democratic primary hopeful to address what has become, in the aftermath of the 2008 financial crisis and Occupy Wall Street movement, a key issue for the party as a leftward shift that began during the 2016 primary accelerates under President Donald Trump.
Taxing wealth, however, could be very difficult to do. First, there are questions about whether it is permitted by the US Constitution, with legal scholars falling on both sides of the argument. The Constitution gives Congress the power to levy taxes — such as tariffs on commerce. However, it places limitations on so-called “direct taxes,” though the definition of these has long been unclear.
A 19th century Supreme Court ruling struck down a federal income tax that existed at that time. But the 16th Amendment, which was ratified in 1913, established Congress’ right to impose a federal income tax. Also, an early 20th century Supreme Court ruling upheld the ability of Congress to levy an estate tax.
Warren aides told CNN they are confident it would survive any legal challenges posed by questions over its constitutionality. They also believe that, while the bill would be a non-starter in a Republican-controlled Senate, it could be passed via the reconciliation process by Democrats if the party took control of the chamber in 2021 or later. That process requires only a simple majority of voters rather than the 60 most laws need to break a potential filibuster. The aides added that the campaign has not discussed the plan with any other declared or potential presidential hopefuls.
In a pair of letters provided to CNN by Warren’s campaign, 17 signers, including multiple former heads of the Office of Legal Counsel at the Department of Justice, wrote in defense of the plan’s legality.
“Constitutional text and history demonstrate that ‘direct’ tax is best interpreted as a narrow category that would not include a net worth tax (like the one Warren is proposing),” one of the letters states, arguing the plan “falls squarely within Congress’ broad taxing power.”
Gene Sperling, a former National Economic Council director under Presidents Bill Clinton and Barack Obama, tweeted his support for the plan on Thursday afternoon.
“Wealth inequality in our nation is a national scandal. This type of wealth tax that (Sen. Warren) is proposing is essential,” Sperling said. “It frees up dramatic amounts of resources that make it more likely the vast number Americans can have economic security & a shot at their own small nest egg.”
University of California Berkeley economics professors Emmanuel Saez and Gabriel Zucman, who are well known for their work on income inequality and taxing the rich, worked with the Warren team to analyze the proposal, a source confirmed to CNN. The Washington Post first reported on the plan.
Saez and Zucman estimate that 75,000 households — less than the wealthiest 0.1% — would be subject to this wealth tax. That group has a net worth of roughly $9.3 trillion, they estimate. Billionaires are worth an estimated $2.5 trillion. The plan would raise around $2.75 trillion over 10 years and the “billionaire surtax” alone would bring in $25 billion in 2019 from roughly 900 families. Both taxes would raise $212 billion this year.
The professors determined that the plan would raise around 1% of the gross domestic product per year.
“One of the key motivations for introducing a progressive wealth tax is to curb the growing concentration of wealth,” they said in a letter addressed to Warren and provided to CNN.
The top 0.1% of families control about 20% of the nation’s wealth in recent years, up from 7% in the late 1970s, they said. Meanwhile, the share of wealth held by the bottom 90% has fallen to 25% from about 35% in the late 1970s. This is mainly because the bottom 90% has racked up debt, including mortgages, consumer credit and student loans.
Currently, the wealthiest 0.1% of families are projected to pay an average of $3.68 million — or 3.2% of their net worth — in federal, state and local taxes in 2019. The proposed wealth tax would add an extra $1.27 million, bringing the total tax burden to 4.3%, the professors estimate.
The bottom 99% of families have a total tax burden of 7.2% of their wealth. This is because they are mainly taxed on income from their labor, while the rich make money from their wealth and that’s taxed at a lower rate.