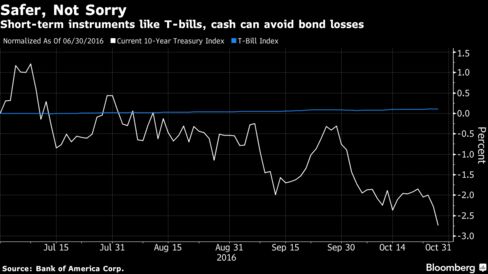 Mohamed El-Erian said hes favoring cash when managing his own money. The idea is catching on in the bond market as benchmark 10-year U.S. yields rise to the highest level since May.

Mirae Asset Global Investments Co. said its building its cash position in one of its Asia bond funds during the U.S. presidential campaign. Fukoku Mutual Life Insurance Co. says it hasnt been able to find value in the biggest bond markets. A survey of investors by Bank of America Corp. showed cash holdings match the highest levels since the terror attack on the U.S. on Sept. 11, 2001.

Bonds are falling around much of the world as investors reconsider how much longer central banks in advanced economies will maintain their monetary-stimulus programs. The Federal Reserve is considering raising interest rates, and Americans vote in the presidential election Nov. 8.

Im increasing my cash position now, said Enna Li, who manages a bond portfolio in Taipei for Mirae Asset, which oversees $93 billion globally. The U.S. election is a big uncertainty. Li said she holds 10 percent in cash, versus the usual allocation of 3 percent to 5 percent.

Bonds worldwide have lost 2.9 percent in October, according to the Bloomberg Barclays Global Aggregate Index, on course for their worst month since May 2013.

Global fund managers had 5.8 percent in cash, Bank of America said in its survey published this month. Besides reaching that level in 2001, the allocation also climbed that high in July following the U.K. vote to leave the European Union.

El-Erian, the chief economic adviser at Allianz SE and a Bloomberg View columnist, said last week he holds 30 percent of his own money in cash.

For more on the risks the U.S. election holds for markets, click here.

Central banks in the U.S., Japan and Europe have used unprecedented asset purchases to support their economies. Now futures contracts imply theres about a 73 percent chance the Fed will raise interest rates by December.

The Bank of Japan shifted to targeting bond levels from its goal to push yields lower. European Central Bank officials who asked not to be identified said the authority will probably gradually wind down its bond purchases, though the ECB later said the governing council hadnt discussed it.

Fukoku Mutual spent most of 2016 building its cash holdings because low yields in the biggest bond markets are unattractive, said Yoshiyuki Suzuki, the head of fixed income in Tokyo, who helps manage the firms $61 billion in assets. Ten-year debt yields 0.18 percent in Germany and minus 0.06 percent in Japan. Suzuki said he invested funds his firm earned on gains in the currency market in U.S. government bonds from July through September.

The cash position is larger than usual, Suzuki said. We cant find a good market. In that case, cash holding is a good strategy. Cash holdings at the insurer climbed to 6.6 percent of assets as of June 30 from 4.9 percent at the end of March, based on data on the companys website.

Nows the time to get out of the way in the debt market, Kathleen Gaffney, a bond manager at Eaton Vance Corp. in Boston, said on Bloomberg Television last week. The $37 million Eaton Vance Core Plus Bond Fund, which Gaffney helps run, had 30 percent of its assets in cash at the end of September, according to the companys website. The figure jumped from 23 percent at the close of August, based on data compiled by Bloomberg.