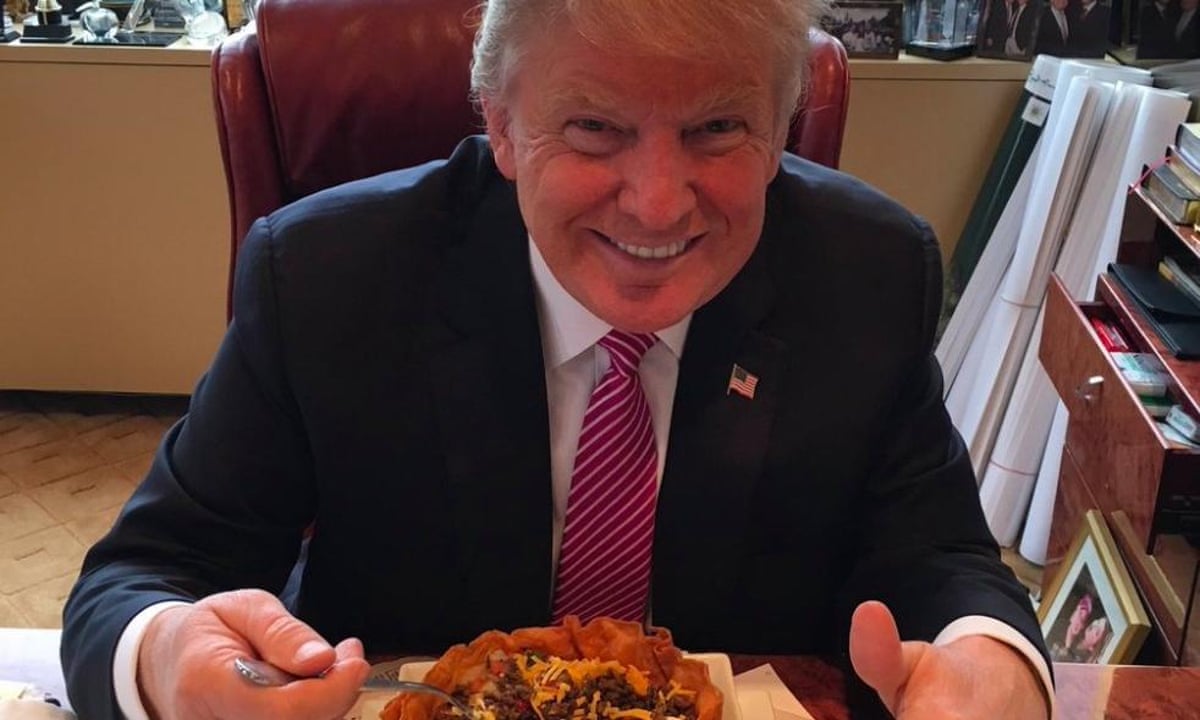 After insulting and demeaning Mexican people for months and threatening to build an even bigger wall along their border with the US, Trump has come to realize that in order to defeat Hillary Clinton in November, he has to get Hispanic people to at least consider the possibility that he doesnt despise them.

This led him to disreputable pandering such as his recent decision to pose for a photo-op with a taco bowl. Its a truly tall order, but this picture, co-starring a fried tortilla bowl filled with stuff (which Mr Trump probably thinks is the national dish of Mexico) is sure to go a long way toward bridging the divide.

The picture raises important questions as the undecided voter begins to weigh his or her options for the next president of the US. Join me as I try to answer some of these questions through a combination of blatant conjecture and schoolyard bullying, a method I like to call the Art of the Deal.

What other minority groups must Trump apologize to through ritual consumption of Americanized versions of their food?

Trump has upset a lot of different people besides Hispanic people. African Americans, LGBTQ voters, women, Ted Cruzs wife, prisoners of war, Muslims and mortified hairstylists across the nation. Its going to take a concerted effort for Trump to repair those relationships. I suggest the following equally ridiculous, patronizing Hail Mary passes:

African Americans: Pose for a photo with a bottle of Dirty Sprite on your desk. Promise to rename the White House the Trap House.

Prisoners of war: Renounce all forms of torture. JUST KIDDING. YOULL NEVER DO THAT.

Hairstylists: You already know what to do. Dont make me say it out loud.

Whats actually inside the taco bowl?

Through very scientific methods of photographic enhancement, AKA squinting, I have identified the ingredients. What a man eats tells us so much about what is inside of him. I see sour cream, beef, cheddar cheese, a rather skimpy helping of salsa, and refried beans. Thats fine, I suppose, but I must ask yet another question

What Trump has put inside his bowl is the devils melange of fat, grease and artery-clogging dairy products. Dont we want, nay, demand a fit leader? I must ask again, sir, where is the lettuce? Do you not value your own body? Do you not care about cholesterol, high blood pressure, and other ailments that could severely limit your ability to govern?

This is such a simple fix, sir. Add some lettuce. Its a fine treat for any and all meals. In fact, all one needs to do to make a meal healthy is to throw lettuce on it. The cobb salad is so popular because it too adds green vegetables into a mash of delicious junk. The next time you want to order Dominos pizza at 3am, consider asking for a sprinkling of the leafy stuff.

My God, is that really his ex-wife?

Benny Johnson, creative director for the website Independent Journal, tweeted the discovery that Trump had a photo of his ex-wife, Marla Maples, in a bikini on his desk when the infamous taco bowl photo was taken.

I cannot verify or dismiss this claim, but I can say that its perfectly normal behavior to have pictures of your ex-wife in a state of undress in your office. I heard a rumor that Charles de Gaulle did the same thing during the second world war.

Does Trump have enough trophies?

The one on the left looks like a fake Oscar you get on Hollywood Boulevard.

Are all those rolled-up blueprints plans for the Mexican wall or for a new golf course?

Actually, why not combine the two? Im sure plenty of supporters will want to visit the wall to pay respects to this exorbitantly expensive monument to your unchecked ego. How about letting them get in a round of 18 during their pilgrimage? Throw a Jimmy Buffetts Margaritaville on the last hole and Americas budget deficit will be a thing of the past.

Why isnt the napkin on your lap while you eat?

What are you, some kinda savage? Do you even care about keeping your pants clean? How will you keep that fork steady with those tiny raptor hands?

Do you think were all stupid?

You must, if you truly believe that all it takes to atone for your vile rhetoric is to get an official endorsement from some food. Youre probably up in Trump Tower, patting yourself on the back with your hummingbird claw hand for the genius of this move. In reality you know, the world you dont live in this sort of stunt is transparent, opportunistic, and obviously tacky.

But this isnt reality, its American politics in the year 2016. Clinton can compare herself to your abuela, and Ted Cruz and Marco Rubio can yell about who speaks better Spanish.

These tricks are an unfortunate part of the electoral process now, and in a sense, speak to the power Hispanic voters now hold over candidates for national office. Its just that Trumps version of this tactic is even less interested in subtlety or authenticity. Its not simply that hes pathetically groveling for forgiveness from an ethnic group hes opportunistically maligned in order to stoke the passions of the Republican base. Its that hes doing it without any hint of irony or remorse.

In Trump World, the last year never happened. It all vanished with the wave of a fork and the flashing of a grin.