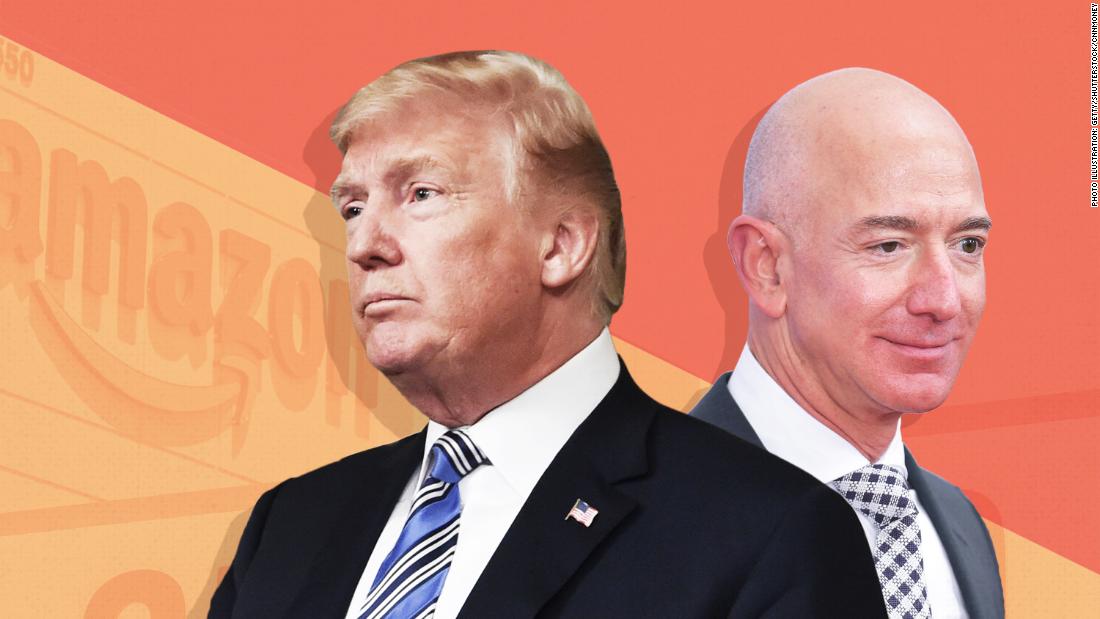 (CNN)On Thursday, Amazon founder Jeff Bezos took the extraordinary step of posting a personal essay alleging that the National Enquirer offered to bury embarrassing personal photos of him — stemming from an extramarital affair — if an investigator working for Bezos would stop referring to the alleged “politically motivated” nature of the leak pictures.

Few details have been offered to back up the claim from Bezos’ investigator — a man named Gavin de Becker — that there was a political motivation to the Enquirer’s coverage of the Amazon chief. It’s also not clear why American Media Inc., the parent company of the Enquirer, were so fixated on trying to stop de Becker from labeling their coverage politically motivated.
However, Manuel Roig-Franzia, a reporter for The Washington Post who spoke with de Becker recently, said this on MSNBC Thursday night (bolding is mine):
“They have begun to believe, the Bezos camp, that this publication by the National Enquirer might have been politically motivated. Gavin de Becker told us that he does not believe that Jeff Bezos’s phone was hacked. He thinks it’s possible that a government entity might have gotten hold of his text messages.”
Wait, what? I’d like to know WAY more about that.
What we do know — and to be clear, there’s much more that we DON’T — are two very basic things:
1) Donald Trump and AMI boss David Pecker have a very long friendship that, on at least one occasion, has led to the Enquirer paying a woman (Karen McDougal) for the rights to her story that she had an affair with Trump in the mid-2000s and then never running that story.
2) Trump has long been antagonistic to Bezos publicly.

How antagonistic? Very.
“The @washingtonpost loses money (a deduction) and gives owner @JeffBezos power to screw public on low taxation of @Amazon,” Trump tweeted in December 2015. “Big tax shelter” (Sidebar: This claim does not appear to be founded in fact.)
“Washington Post employees want to go on strike because Bezos isn’t paying them enough,” Trump tweeted in June 2018. “I think a really long strike would be a great idea. Employees would get more money and we would get rid of Fake News for an extended period of time! Is @WaPo a registered lobbyist?”
Following the Enquirer’s report that Bezos was engaged in an extramarital affair, Trump tweeted this last month: “So sorry to hear the news about Jeff Bozo being taken down by a competitor whose reporting, I understand, is far more accurate than the reporting in his lobbyist newspaper, the Amazon Washington Post. Hopefully the paper will soon be placed in better & more responsible hands!”
(In addition to attacking Bezos, Trump has repeatedly referred to the “Washington Post” as the “Amazon Washington Post”; Amazon does not own the Post, Bezos owns it.)
Asked by reporters about the news of Bezos’ divorce around that same time, Trump said this: “I wish him luck, I wish him luck. It’s going to be a beauty.”
It’s worth noting that Trump has not *always* been antagonistic toward Bezos — especially prior to his decision to run for president. Trump — seemingly admiringly — tweeted a Bezos quote (“If you never want to be criticized, for goodness’ sake don’t do anything new.”) in 2014. Bezos had purchased the Washington Post in 2013.
Does any of the above mean that the allegations of political motivation in the leaked text and pictures to the Enquirer should be tied to Trump? No. But Trump has made his feelings about Bezos, Amazon and The Washington Post very clear for years now. And those feelings are decidedly negative.