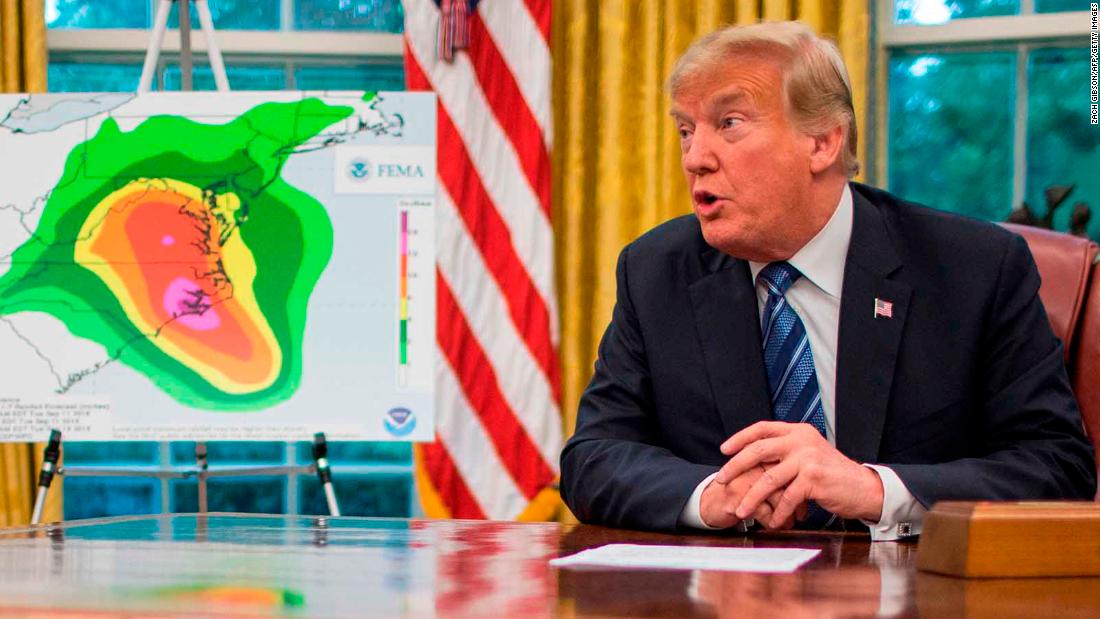 So … the President of the United States is suggesting that the Puerto Rican government — either in cahoots with or under pressure from Democrats — inflated the death toll of Hurricane Maria solely in order to make him look bad.

And he is making these entirely unfounded allegations as another hurricane bears down on the East Coast packing winds of more than 100 miles per hour and the very real potential for catastrophic flooding.
This should not surprise us, but it should serve as a reminder that there is not a bottom here. There is no depth that Trump will not explore in order to further his own narcissism and victimhood. There is no conspiracy he will not embrace — or, in this case, start — in order to improve his own personal brand or further his own political narrative.
Let’s talk about the facts.
In late August, the Puerto Rican government acknowledged that the death toll from Hurricane Maria was 46 times higher than they had previously publicly acknowledged. It was not 64 people who lost their lives in the monster storm but somewhere closer to 3,000. The new estimate comes from a study conducted by the Milken Institute of Public Health at George Washington University, and commissioned by Puerto Rico Gov. Ricardo Rosselló. CNN’s own reporting reflects similar numbers.
In a Facebook Live following the tweet, Rosselló defended the reliability of the death toll assessment: “Recognizing the various challenges, we wanted to have an independent effort and voice that would minimize the uncertainty regarding the excessive amount of deaths. At the end of the process, I evaluated the process in which this independent group of scientists conducted this analysis and at the end I decided to use the final number as the official number. I trust that this process was conducted adequately,” he said in Spanish.

Earlier this week, faced with the reports of the greatly expanded death toll, Trump insisted that he had done a terrific job in the country. “I actually think it was one of the best jobs that’s ever been with respect to what this is all about,” he told reporters.
That was bad enough, particularly given the fact that a) we are talking about peoples’ lives here and b) another major hurricane was barreling toward the Carolinas even as Trump was touting his own performance after Hurricane Maria.
Now Trump has gone even further — pivoting from merely defending his performance to embracing a conspiracy theory about the actual death toll from the hurricane and suggesting Democrats are secretly behind all of it. As evidence, he offers — you guessed it! — absolutely nothing.
Trump’s twisted logic goes like this (I think): The governor of Puerto Rico — Ricardo Rosselló — is a Democrat. Democrats always are out to get me. When I was in Puerto Rico everything looked OK and not a lot of people died. So now Democrats are saying lots more people died — including people with no connection to the hurricane!! — just to make me look bad!
That line of “thought” confirms a lot we already know about Trump:
1) He is paranoid and often believes everyone who is not his staunchest ally is secretly plotting to “get” him.
2) He views everything through the lens of politics and party. Because Rosselló or San Juan Mayor Carmen Yulín Cruz, who has criticized Trump’s response, are Democrats, they must be willing to do whatever it takes to make the President look bad.
3) He makes everything — including natural disasters — about him.
That last point that, I think, is the most remarkable and frightening. To believe what Trump apparently does about the death toll from Hurricane Maria, you have to also believe that the governor of Puerto Rico commissioned a study from an independent group with the express purpose of embarrassing Trump. And that a respected center at George Washington University lied about their estimates of how many people died due to Maria solely to make Trump look bad.
That’s an extraordinary level of narcissism. To exhibit that level of self-focus even as a handful of states are bracing for the potential of a disastrous weather event over the next 24-48 hours speaks to how all-consuming that narcissism is.
“The victims and the people of Puerto Rico in general, do not deserve their pain to be questioned,” Rosselló said in the Facebook Live. “I ask the President of the United States to make sure that all the agencies invest in the resources necessary to continue working favorably for the people of Puerto Rico.”
Prominent Florida Republicans — including Gov. Rick Scott and Sen. Marco Rubio — sent tweets making clear they disagreed with Trump’s allegations regarding the Puerto Rico death toll.
Not only did Trump think that the Puerto Rican government is unfairly laying thousands of deaths on him — and even making up many of those deaths — he felt strongly enough that he tweeted that idea to 54 million people amid an onrushing natural disaster that is already being felt on the North and South Carolina coasts.
It’s absolutely staggering stuff. And what’s even more appalling is that Trump allies will try to dismiss the criticism of his remarks as nothing more than a confirmation of Democrats’ ill intent and the rabid anti-Trump bias of the news media.
Which, of course, it isn’t. This is about the loss of human life and a President too obsessed with his own image and his own political considerations to understand that. Or to grasp how picking a fight about the death toll in the last major hurricane even as the next major hurricane begins to batter the United States is the definition of counter-productivity — not to mention political insanity.
There is no rock bottom. There is no lowest point. The depths just always go deeper.