As we chuckle over footage of Trumps latest faux pas, his fellow Republicans continue to work to undermine and dismantle our most basic freedoms 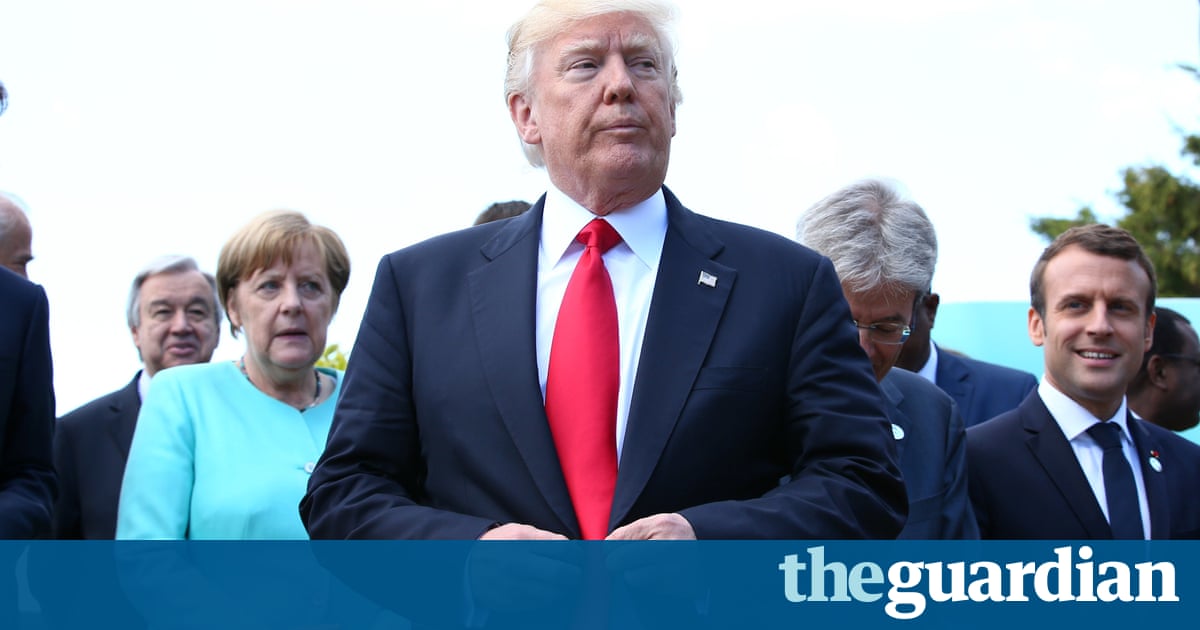 During Donald Trumps state visit to the Middle East and Europe, Americans have been playing a sort of bleak party game, asking one another: what is the most tone-deaf remark, the most egregious faux pas, the most historically amnesiac or insensitive gaffe that our president has made in the course of his journey?

Was it the bullying body language he demonstrated at the Nato summit, shoving aside Dusko Markovic, the Prime Minister of Montenegro, a small country of which some have suggested Trump may not have heard?

Was it his apparent unawareness of where Israel is located, an ignorance displayed when he informed an audience of Israelis that hed just got back from the Middle East? Or was it his seeming inability to distinguish between Islamist and Islamic when he strayed off script during a speech he delivered in Saudi Arabia, a mistake he blamed on exhaustion, though he had only recently left home?

Most people, I imagine, would argue that Trumps most appalling errors of taste and judgement occurred during his visit to Yad Vashem, Israels Holocaust memorial, where he spent a total of 15 minutes and left a startlingly buoyant note in the memorials Book of Remembrance a brief message that some have called more appropriate for a senior signing a high school yearbook, or a satisfied guest recording his impressions in the register of a luxury bed and breakfast: It is a great honor to be here with all my friends so amazing and will never forget!

One can think of any number of adjectives more descriptive than amazing. What about harrowing? Heartbreaking? Or even disturbing?

Many newspapers have reprinted the thoughtful and dignified response that Barack Obama wrote after his tour of the memorial, as if to remind us of what might be appropriate in this context. A few days later, some of what Trump had seen at Yad Vashem might conceivably have prompted him, in some confused and befuddled way, to call Germany evil, very evil at the Nato summit, though as it turned out, he was not referring to crimes of the past but rather to German car sales in the United States.

Meanwhile, its been hard to read the accounts of Trumps trip that have appeared in the foreign press without cringing in embarrassment for this man who is representing our country abroad.

Immediately following the November election, many of us vowed that we would never normalize the Trump presidency, that we would never allow his mindless, kleptocratic style of governance to seem acceptable, ordinary, quotidian. But what we hadnt counted on was how much bad behavior there would be, how the daily barrage of outrageousness would diminish our capacity for outrage.

Under another presidency, any single one of the things that Trump has done and said during his journey might have sparked an international scandal; any one of these incidents might have inspired discussion, debate, response and, presumably, an apology.

But each regrettable and ill-advised remark and action has followed closely upon the other with no real consequence, in part because Trumps missteps are so numerous, and in part because no one seems to takes him and his clownish behavior seriously.

And all of this has become so normalized that we have been lulled, or almost lulled, into overlooking the fact that this is our president, that this man who lacks even the most basic idea about the geography of the Middle East possesses the nuclear codes.

Meanwhile one can only assume that Mitch McConnell, Paul Ryan and the other powerful Republicans in Congress are thoroughly delighted by the attention being paid to Donald Trumps convincing and almost parodic imitation of the most ill-informed and brutish American tourist.

As we chuckle over footage of Trumps awkward participation in the hypermacho ritual of the Saudi sword dance, his fellow Republicans continue to work to undermine and dismantle our educational system, to threaten our most basic freedoms, and to deny health insurance to those who need it most.

Recently, I watched the brilliant British mentalist and magician Derren Brown demonstrate the power of misdirection and distraction. He placed a banana on the far edge of the stage and promised that, at some point during his performance, a man in a gorilla suit would appear on stage and steal the banana, which the audience thoroughly engaged by Browns showmanship would fail to notice. And that is precisely what happened. Before the intermission, Brown directed our attention to the side of the stage. The banana was gone.

A more serious and consequential version of that clever magic trick is happening every day. While Trump is off on his travels, playing the buffoon is one country after another, we are too busy watching him to pay sufficient attention to what is transpiring back in Washington.

As we chortle over the clips of Melania Trump briskly swatting away her husbands hand every time he tries to touch her, the Republicans are slyly and effectively slipping their hands into the pockets of the American people.