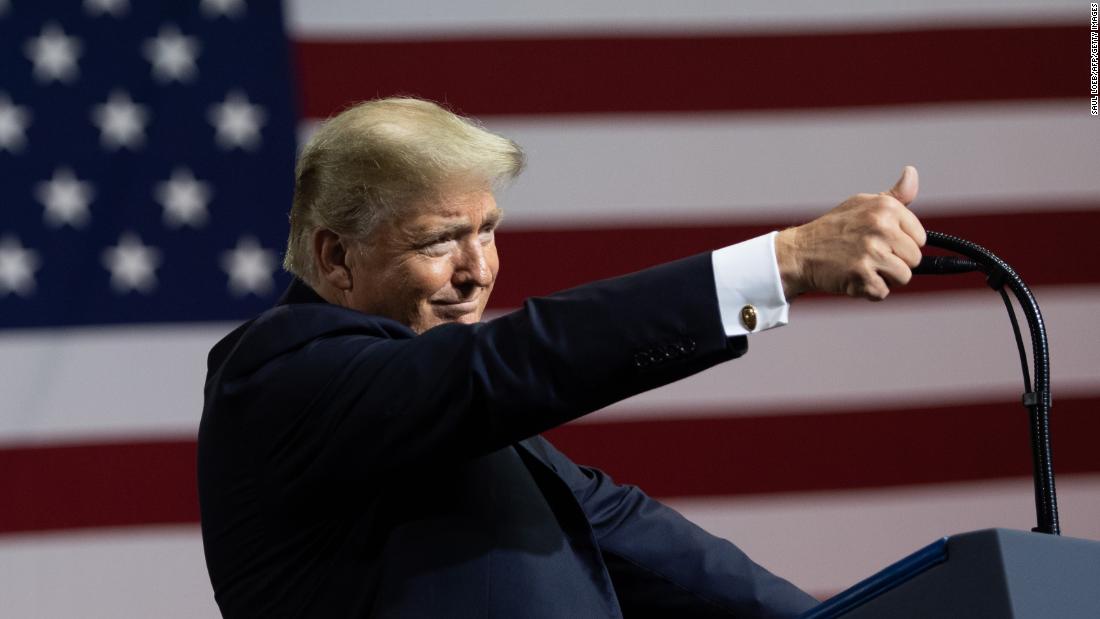 (CNN)President Donald Trump traveled to Tampa, Florida, on Tuesday night for the latest in a rapidly increasing number of campaign rallies for Republican candidates running for office this November. This time, Trump was supporting the gubernatorial bid of Rep. Ron DeSantis, who has benefited mightily from Trump’s endorsement and is now considered the favorite in the August 28 Republican primary.

1. “Oh, that’s too bad, that’s too bad. That’s too bad. That’s too bad. One person — one person, and tomorrow the headlines will be, ‘Massive protests.’ “
Within seconds of Trump beginning to speak, a protester disrupted him. And — spoiler alert! — the headline wasn’t “MASSIVE PROTESTS DISRUPT TRUMP RALLY.” And away we go!
2. “In fact, it was gone, until one gentleman decided at 2 o’clock in the morning.”
It’s an accepted staple of Trump’s current stump speech that he will take this extremely thinly veiled shot at Arizona Sen. John McCain for voting against the so-called “skinny repeal” health care bill. And, yes, Trump has kept this line in his speech even as McCain, a prisoner of war in Vietnam, battles brain cancer.

3. “I have Eric Trump, who’s been fantastic. He loves this political stuff.”
Earlier in the day, on the way to Florida, deputy White House press secretary Hogan Gidley was asked why Eric Trump was along on this trip. “I don’t know,” he replied. Good times.
4. “We have a big thing happening because you know this — look at all those hats. White ones, red ones, they all have the same thing, ‘Make America Great.’ “
Red ones! White ones! And, yes, Trump makes mention of all the people wearing “Make America Great Again” hats in the crowd at each of his campaign speeches.
5. “I also want to thank David Bossie for being here, Corey Lewandowski for being here, two of our great supporters.”
Lewandowski, as you know, is Trump’s former campaign manager, who remains in the fold as an adviser. Bossie is the man behind the Citizens United lawsuit and was deputy campaign manager in the closing months of Trump’s 2016 campaign.
6. “It was actually done quite easily. We won quite handily. We were never left-center stage.”
The 2016 election ended 630 days ago — as of last night. Also, the reference to having “never left-center stage” is him talking about how he was often in the middle of the stage — thanks to his standing in the polls — during the Republican primary process.
7. “And I said, ‘I always want odd numbers.’ Because I want to be in the center. I didn’t want to be tied for the center.”
Yes, Trump always wants to be in the center. By himself. With all eyes on him. Which is why the people pushing the idea that Trump hates the job and won’t run for re-election should be totally ignored.
8. “Look at all those cameras right there.”
He is always, always, always aware of being on TV and how much buzz whatever he is saying is drawing. It’s his lifeblood.
9. “They are fake. No, I mean, do you believe — look at this: Every night, it’s the same thing.”
The reason the coverage of Trump has a similar ring to it is because Trump does the same sorts of things — tweets that explode the White House message, threats to foreign leaders, score-settling against political opponents — every day.
10. “They just can’t get enough. They can’t get enough. They cannot get enough.”
Trump means this as a shot against the media but, in truth, he absolutely loves all the media attention. Loves it.
11. “So we’re setting records like never before.”
What does this apply to? Who knows! Everything?
12. “You guys are great. Thank you. Blacks for Trump. They say, ‘Blacks for Trump.’ “
“Look at my African-American over here! Look at him.” — Trump, June 2016
13. “Sorry about this, women, but the employment rate has reached the lowest level in only 65 years. It’ll be history soon.”
I am so confused. What is Trump “sorry” for here?
14. “But everyone that reached me says hello, Mr. President, congratulations on what you’ve done for the economy. It’s the talk of the world, talk of the world.”

the White House knows about the Russia probe

gets right about Donald Trump

To Trump’s telling, every single world leader he meets says this to him. If it is true — which, um, maybe? — it’s likely the result of the fact that Trump has made very clear that the way to his heart is through an unrelenting fusillade of compliments.
15. “Now that we have the best economy in the history of our country. … “
Um, no.
16. “We won every farm state, you’re going to see that middle of that map — wasn’t even the middle, it was about everything but a little corners of each side. But you have to see, that is all red, Republican red, beautiful, Republican red.”
It’s hard to be totally sure what Trump means by a “farm state.” But this 2017 list of the states with the most farms shows that Trump won seven of the top 10. He lost California (#5), Minnesota (#8) and Illinois (#9).
17. “Farms have been on a decline, I mean it’s been for 15 years.”
Again, not sure exactly what measurement Trump is using here. But it is true that in February farm income hit its lowest point in 12 years.
18. “I’m not like other politicians.”
FACT CHECK: True!
19. “One of the brilliant pundits that has a — doesn’t have a clue. I mean, these people, how they have gotten us wrong.”
“One of the dumber and least respected of the political pundits is Chris Cillizza of the Washington Post @TheFix. Moron hates my poll numbers.” — Donald Trump, May 12, 2015
20. “Dump all you want. I hope you dump a lot.”
He’s talking about steel dumping. By other countries.
21. “I tell the story, I was in New York and I shake hands.”
“Barbaric.” — Donald Trump on shaking hands
22. “You know, polls are fake, just like everything else.”
I don’t have anything funny to say. Just go back and read those nine words. And remember that the President of the United States said them. And a decent-sized group of Americans applauded.
23. “Remember, I said, when I’d be a little bit wild, and we’d have a lot of fun, they’d say, ‘He’s not acting presidential,’ and I’d say, ‘Well, it’s a lot easier to act presidential than to do what I do.’ Anybody can act presidential.”
Trump followed this riff by walking woodenly back and forth across the stage. Modern-day presidential!
24. “Ladies and gentlemen of the state of Florida, thank you very much for being here. You are tremendously people, and I will leave now, because I am boring you to death. Thank you.”
“Presidential” Donald Trump.
25. “Abe — Abe looked pretty presidential, right? What do you think? He’s tough. He’s tough. I admit it: Abe Lincoln is tough. But we love Abe Lincoln.”
Many historians have said Abe Lincoln is tough. But we love him.
26. “And on top of that, the Democrats — Nancy Pelosi, the whole group, Maxine — Maxine. She likes me a lot. She likes me a lot.”
“I think he’s the most deplorable person I’ve ever met in my life.” — Maxine Waters on Donald Trump
27. “You know, if you go out and you want to buy groceries, you need a picture on a card, you need ID.”
This is, as anyone who has ever been to a grocery store knows, not true. White House press secretary Sarah Sanders was asked about this line during her briefing on Wednesday; she explained that Trump was referring to showing a driver’s license when you try to buy alcohol at a grocery store. Riiiiiiiiight.
28. “In this country, the only time you don’t need it in many cases is when you want to vote for a president, when you want to vote for a senator, when you want to vote for a governor or a congressman, it’s crazy, it’s crazy.”
One other time when you don’t need your ID: when you buy non-alcoholic groceries.
29. “Remember I said it’s awfully early to be thinking this, but I always think it, remember the attack on ‘Merry Christmas,’ they’re not attacking it anymore. Everyone is happy to say Merry Christmas, right? Merry Christmas, Merry Christmas, Merry Christmas.”
Satire is dead. This line killed it. RIP, satire.
30. “They came out and they voted 84% and doubled and tripled the numbers that ever voted in an election before. We love the evangelical Christians.”
It was 80%. But, honestly, close enough. We love the evangelical Christians!
31. “We want to be a puppet for no one any longer.”
“No puppet. No puppet. You’re the puppet.” — Donald Trump to Hillary Clinton, October 2016
32. “I’ve got a lot of fun, even in Florida, I’ve had a great career, I’ve had a lot of fun.”
Even in Florida!
33. “And I didn’t know anybody in Washington, but now I know everybody in Washington. I know the good ones. I know the bad ones. I know the wonderful people and I know the scum. And America now is winning again like they haven’t won before.”
So, yeah. That all makes perfect sense to me. [jerks collar nervously]
34. “Brett Kavanaugh, highest education, best grades, best tests, best everything.”
The key credential to becoming a Supreme Court justice is having the “best tests.” It is known.
35. “I’ve also directed the Pentagon to begin the process of creating the sixth branch of our military, the Space Force — building the space force.”
SPACE! FORCE! Also, I got you this T-shirt. I hope you like it.
36. “Instead of apologizing for America we’re standing up for America. We’re standing up for the heroes who protect America and, yes, we are proudly standing up for our great National Anthem.”
If you needed to explain Trump and how he appeals to his voters to an alien, I would nominate these two sentences.
37. “This may be, in fact it probably is, the greatest movement in the history of our country.”
Yes, President Trump, the civil rights movement would like a word …
38. “We’re going to keep on winning. We’re going to win so much and the people of Florida actually love, don’t they? They love it.”
Who doesn’t love winning? Not me!