Trump pushes forward with plan for 25% tariff on imports of steel and a 10% tariff on aluminum, but says exceptions will be made 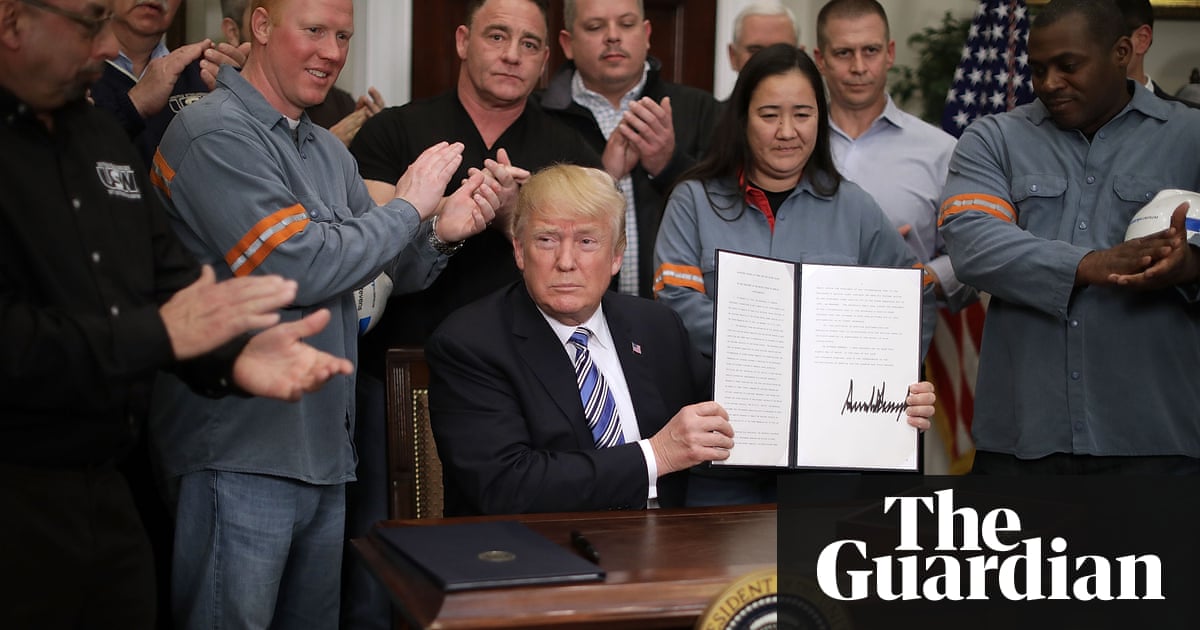 Donald Trump pushed forward with plans to impose tariffs on steel and aluminium imports on Thursday, arguing the levies were necessary for national security and to stop the “assault on our country”.

Flanked by steel and aluminium workers and key staff, Trump said he had to act to stop the “decimation of entire communities” and insisted there would be a very fair process as the administration used the next 15 days to negotiate exemptions with allies. Canada and Mexico will be exempted.

“Steel is steel,” said Trump. “Without steel you don’t have a country.”

Trump campaigned on saving US steel and aluminium jobs, which have been lost to cheap foreign imports. But the tariffs threaten to undermine decades of detente in international trade and have split the Republican party – no congressional members of his own party were present for the White House announcement.

Officials from China and Europe have threatened retaliation if Trump goes ahead with his plan.

Trump’s plan is to impose a 25% tariff on imports of steel, and a 10% tariff on aluminium. The initial plan was for a global levy, although Trump made clear exceptions would be made and suggested that allies’ military spending might be taken into account.

The announcement met with immediate opposition from senior Republicans, who see the move as a tax on US manufacturers and consumers. The House speaker, Paul Ryan, said: “I disagree with this action and fear its unintended consequences.” He said while there were “unquestionably bad trade practices by nations like China” they were better addressed by “targeted enforcement”.

The White House trade adviser Peter Navarro, speaking on the Fox Business Network, said: “Look, this is pretty simple in this case. We’ve got an aluminum and steel industry. The president, quite clearly and correctly, [believes] we can’t have a country without those two industries. Fact of the matter of it, both of them are on life support – the aluminum industry in particular.”

Trump promised on the campaign trail to protect US steelworkers’ jobs, but his plan was opposed by top economic adviser Gary Cohn, who – with the backing of many executives in other industries – argued that the impact on trade and on companies using cheap steel imports would outweigh any benefits of the tariffs.

Cohn resigned this week after just 14 months on the job, the latest in a series of high-profile departures from the Trump administration. “This is Gary Cohn’s last cabinet meeting,” Trump said on Thursday. “He’s been terrific. He may be a globalist, but I still like him. I have a feeling you’ll be back.”

More than 100 Republican House members signed a letter on Wednesday expressing “deep concern” about the plan. They pressed Trump to change course and “avoid unintended negative consequences to the US economy and its workers”.

They added that “tariffs are taxes that make US businesses less competitive and US consumers poorer.”

As Republicans lobby the president to abandon his plan, Trump hasfound some support from his most reliable critics: Democrats.

“President Trump has identified the right opponent – China – much better than both the Obama and Bush administrations did,” Chuck Schumer, the Democratic leader in the Senate, said on Thursday, before Trump’s announcement. “Democrats and Republicans have been blind to this and President Trump isn’t.”

But Schumer urged Trump to tailor his plan so that it targets China and does not affect allies.

“Don’t swing blindly and wildly at our foe, China,” Schumer said. “Establish a well-placed jab at China. Set them back. Let them know we mean business.”

He said: “What strikes me is whatever convictions you have about trade, we are convinced that disputes should be discussed and resolved in [a] multilateral framework.

“There is a certain worry or concern about the state of international relations, because if you put tariffs on your allies, one wonders who your enemies are.”

The news has also worried business leaders. On Bloomberg TV on Thursday, Jamie Dimon, the chairman of JP Morgan, said: “There are serious issues around trade. The WTO [World Trade Organisation] needs to get its act together and get a little more ambitious about fixing some of these problems, but I think tariffs is the wrong way to go about it.”