Sketches fell flat in a show that was nothing short of torture, as the Republican candidate faced jokes with little edge 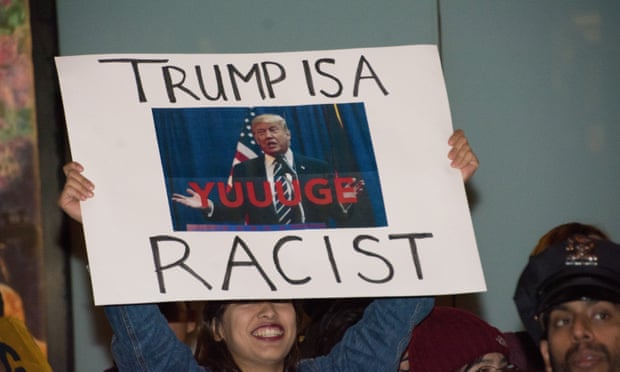 A number of mostly toothless jokes did not give Donald Trump the skewering he deserves just another occasion to stoke his ego.

Since its inception 40 years ago, Saturday Night Live has always been hit or miss, with a vast majority of sketches falling squarely in the miss pile. The best thing about the age of the DVR and the internet is on Sunday afternoon you could fast forward through the duds (and the seemingly endless commercial breaks) to get to the good stuff or, better yet, wait for the one or two good sketches of the night to be posted on Hulu and let various blogs curate them for you.

But Donald Trumps hosting gig on Saturday 7 November turned this bit of late-night entertainment into news-making political theater. The whole hour had to be watched to see what might happen and the entire hour, from start to finish, was nothing short of torture.

Around the time there was a sketch with Trump nonsensically playing a music producer named Stacy Steve, I wanted more than anything to just forget this was happening and go to bed, waking up in December 2016 with the new president already decided so all of this spectacle would seem like some sort of Ambien-influenced nightmare.

The first sketch didnt even contain Trump; instead, it was a candidates forum on MSNBC that featured the three Democratic candidates. Were going to have to put up with another whole year of this? The saving grace of the first sketch, and the best part of the entire night, was Larry David reprising his role as candidate Bernie Sanders, which is both a spot-on impersonation and a hilarious parody of his crotchety, far-left persona.

Trump arrived just in time to do the monologue where a gag about how Trump actually thought plus-sized brunette cast member Aidy Bryant was Rosie ODonnell was moderately amusing, as was Trump standing cheek to impressive jowl with two of his impersonators from the show, current cast member Taran Killam and alumnus Darrell Hammond, who did fake-Trump duties back in 2004 when he last hosted the show, at the height of his The Apprentice resurgence.

The most memorable part was when Larry David shouted that Trump was a racist and when questioned about his outburst said he had heard that he would get $5,000 for saying it. Indeed, there was a Latino Pac offering a reward for any hecklers who would call him out.

Actually, the entire evening was not funny, with a few small exceptions. There were a couple of sly jokes, like about how great the country was once Trump was elected president in a sketch where the Mexican president arrives in the Oval Office with a check for building the wall along the border. I actually let out a little chuckle when it was clear he had hired Omarosa Manigault-Stalworth, the villain from the first season of The Apprentice, as his secretary of state. Oh, and lets not forget about him doing bad dance moves in a video making fun of Drakes choreography in the Hotline Bling video. Im sure the gifs have been collected in several places across the internet already.

The rest of the Trump-centric sketches fell flat, including one set in an Italian restaurant, where Trump was supposedly live-tweeting the experience but he was actually just insulting all the actors onscreen, who were then petrified of what horrible things he was saying about them. The deadliest scene of the evening was one about a band introducing all its members. They took up so much time that laser harp player Gene Breads didnt get any time to play his instrument. This seemed like it was trying to be a satire about members of the overcrowded GOP field trying to get time at the mic during their recent debates, but it never quite reached that high. Im not sure what it aspired to be, exactly, except for an excuse to put Trump in a bad steampunk trench coat behind five laser pointers aimed at the ceiling.

With David calling Trump a racist and other critical sketches, it seemed at times like the cast of the show was relishing making fun of the man to his face, but the claws were never that sharp. Most of the jokes about Trumps cockamamie policies tried to dismiss them with a chuckle. To the writers of SNL, theyre silly foibles rather than serious proposals that need to be held to actual scrutiny.

The one exception was Bobby Moynihans Drunk Uncle character saying he was Trumps biggest fan during Weekend Update.

The scene seemed to paint Trumps supporters as alcoholic racists, which is a damning criticism of the campaign considering its participation in the episode.

Aside from the lack of humor, the most disappointing aspect of the entire endeavor was that it was what everyone feared it would be: a craven ratings ploy. It quickly became evident that either due to equal-time rules or Trumps busy schedule as the man at the center of the medias spotlight, he wasnt able to participate much. He did the monologue, the sketch about the success of his presidency (featuring his daughter Ivanka playing herself), and a few other things, but his appearance was mostly limited to a few stray lines playing the straight man or quick appearances in the pre-taped sketches. If the show was going to completely give itself over to this man and a scathing criticism of how he is turning the political process into a theater of the absurd, it might have been worth watching. Instead this was just a cheap attempt at a ratings spike and more fuel for the inferno of this mans all-consuming ego.

Trumps guest spot could have been a major milestone in satire, like when Stephen Colbert humiliated President George W Bush at the Washington Correspondents Dinner. Instead it turned out to be no laughing matter.