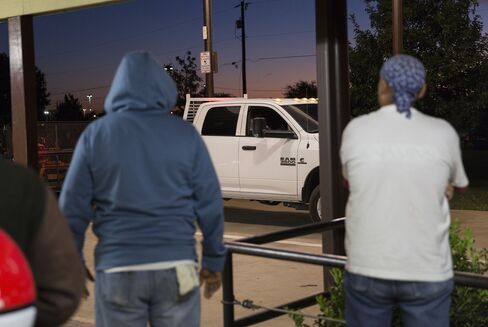 Mention the name Donald Trump to Gerardo Lozano, and it doesnt take long for him to explode. I can only imagine, he says, the anger building in his voice, what it will be like if he becomes president.

Lozano, 58, short and wiry with thick glasses and a black-and-gray TEXAS ball cap, is an undocumented Mexican immigrant. For 15 years now, hes worked in the U.S., the last two of them as a day laborer in Plano, just outside Dallas. He does a little roofing, some landscaping, plumbing, whatever comes his way. On a good day, he can pocket $150.

What Lozano doesnt know about Trumps candidacy is that, strangely enough, it has benefited him greatly. The value of those paychecks he earns, when converted into pesos and wired back home to his family in Mexico, is soaring. Thats because Trumps harsh discourse toward Mexicans — build a huge wall, throw out all illegal immigrants, renegotiate NAFTA — has rattled markets and pushed the peso down against the dollar month after month.

Each dollar that Lozano ships across the border today provides his wife Maria with almost 20 pesos. In mid-2015, before Trump entered the race, each dollar fetched just over 15 pesos. The extra cash has helped Maria pay for all sorts of little luxuries: new blue jeans and skater-style sneakers for their 16-year-old son; and weeks-worth of supplies of beef, chicken and bars of soap. Shes even looking to salt away a little of the money so she can build a proper staircase to the second floor of their home in northern Mexico.

It all adds up to a mini-windfall for the Lozanos and countless other Mexican families spread out across both sides of the Rio Grande, and it is one of the great ironies of the 2016 presidential campaign. Donald Trump, the man whose improbable political rise was built largely on his pledge to crack down on illegal immigrants, is inadvertently assisting many of them.

Data shows Mexicans are sending more dollars back home than they have in years, a surge explained in part by the rush to take advantage of the attractive exchange rate. Whats more, some experts even believe that more Mexicans could eventually be tempted to cross into the U.S. in search of work if the peso remains at these levels for months to come.

If youre saving to buy a house or have a big expense coming up, said Carlos Vargas-Silva, an economist with Oxford Universitys Migration Observatory, this is the moment to ship back the money.

Lozano understands that part, of course. Like most Mexicans here, he follows the pesos fluctuations closely and has been scrambling of late to repatriate every dollar he can. Some weeks, he sends as much as $200, double what he used to. Thats part of the reason his wife has had so much extra spending money. He just hadnt realized that it was Trump that was triggering those swings in the peso.

It plunged to a record low of 19.93 per dollar early last week before recovering some of its losses as Trumps campaign showed signs of faltering weeks before the November vote. Investors worry that if elected, Trump would try to seize migrant remittances; or force American manufacturers to close plants in Mexico and re-open them at home (hes called out Ford Motor Co. and Carrier Corp. on this point); or wind up accidentally weakening the U.S. economy, the buyer of four-fifths of all Mexican exports.

There are other factors pushing the peso weaker as well, but Trumps ascendancy has been the main driver of late, according to Andres Jaime, a strategist at Barclays Plc. Once he gained momentum, thats when we really saw the peso underperforming.

For Mexico, the jump in remittances is a rare bright spot in an economy thats been sluggish for years. The $15 billion that flowed over the border in the first seven months of the year marks an 8 percent increase from last year and an 18 percent gain from five years ago.

Much of that money goes straight into consumption. The Lozano family highlights that. So too does Israel Gonzalez. An immigrant who works as a welder in Dallas, he said hes been shipping over more cash to have mechanics fix up a classic VW Beetle he owns back in his home town. And then theres Iris. She and her husband increased the amount they wire to their parents to help them buy groceries and clothes and pay utility bills.

With the exchange rate moving so much, I try to send a bit more, said Iris, who asked her last name be withheld. Because I know for them, its going to be a lot more.

Trumps rise clearly hasnt been all positive for Mexicans living here. Theres the pain of seeing a candidate whos spoken so disparagingly about them win so much support. These are values Americans had and were hidden, Iris said. And this man brought them out.

And theres the growing fear of deportation. After watching the Republican National Convention in July, Iris decided she needed an emergency plan. She instructed her mother to set up a savings account for her, a little contingency fund, so that she and her husband — a construction worker in Dallas — and their two young daughters have something to fall back on if they get thrown out of the country.

It comes from her Trump-fueled windfall, of course.