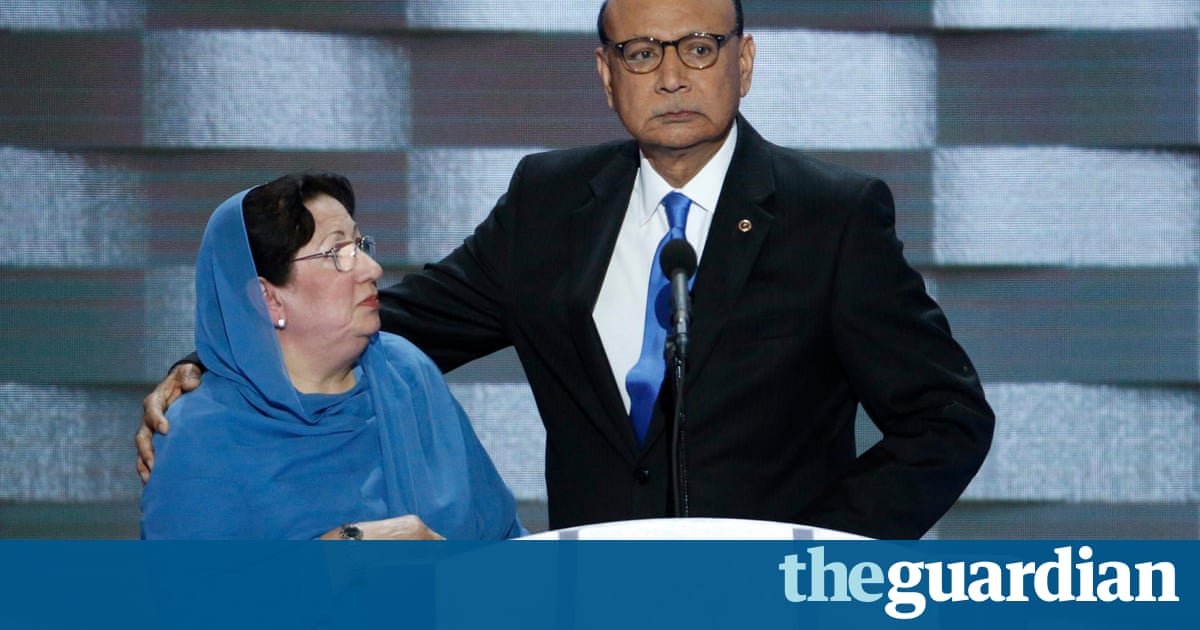 The parents of a Muslim American soldier killed in Iraq said on Sunday Donald Trump was a black soul unfit for the White House, after he insulted them and suggested he had made sacrifices for the US comparable to their sons.

Amid widespread astonishment at the conduct of the Republican presidential nominee, the family of the 27-year-old army captain Humayun Khan, who died in a suicide bombing in 2004, said Trump was morally deficient and incapable of empathy.

He is totally unfit for the leadership of this beautiful country, said Khizr Khan, Humayuns father.

Hillary Clinton, Trumps opponent in Novembers election, spoke later on Sunday at a predominantly African American church in Cleveland Heights, Ohio. Trump, she said, had offered the Khan family nothing but insults, degrading comments about Muslims, a total misunderstanding of what made our country great.

Trumps running mate, Mike Pence, sought to repair some of the damage by releasing a statement on Sunday night.

Donald Trump and I believe that Captain Humayun Khan is an American hero and his family, like all Gold Star families, should be cherished by every American, it said.

But it included a swipe at the disastrous decisions of Barack Obama and Hillary Clinton that had led to a once stable Middle East being overrun by Islamic State.

This must not stand, the statement said. By suspending immigration from countries that have been compromised by terrorism, rebuilding our military, defeating ISIS at its source and projecting strength on the global stage, we will reduce the likelihood that other American families will face the enduring heartbreak of the Khan family.

Donald Trump will support our military and their families and we will defeat the enemies of our freedom.

Khan also pleaded with Senator Mitch McConnell and the House speaker, Paul Ryan, the Republican leaders in Congress, to denounce Trumps comments about his family and his attacks on Muslims. Neither McConnell nor Ryan responded with explicit criticism of Trumps remarks about the Khans.

In a statement released on Sunday, McConnell said Captain Khan was an American hero and said he agreed with the Kahns [sic] and families across the country that a ban on Muslim immigration would be contrary to American values.

Ryan issued a statement that covered similar sentiments and said Captain Khans sacrifice and that of Khizr and Ghazala Khan should always be honored. Period.

Khan urged Trumps children to intervene and fix his character after Trump mocked Khans wife and appeared to suggest she was blocked from paying tribute to her dead son at last weeks Democratic national convention because of her religion.

His wife, Ghazala, dismissed Trumps insinuation and reiterated that she had been too upset to talk after seeing a picture of her son displayed on the stage. What mother could? she asked in an article written for the Washington Post. Donald Trump has children whom he loves. Does he really need to wonder why I did not speak?

She also rejected Trumps claim that employing people in his property company and overseeing the building of great structures amounted to a sacrifice for his country. Donald Trump said he has made a lot of sacrifices, she wrote. He doesnt know what the word sacrifice means.

The Khans were as roundly supported as Trump was condemned, after the Republican nominee criticised Ghazala Khan for standing silently beside her husband while he delivered his moving speech about their son and Trumps attacks on Muslims to the Democratic gathering in Philadelphia on Thursday evening.

Khizr Khan told CNNs State of the Union Trump was totally incapable of empathy, adding: I want his family to counsel him. Teach him some empathy. He will be a better person, but he is a black soul.

Reiterating his wifes explanation that she was too overcome by grief to say anything at the event as planned, Khizr Khan expressed disbelief that Trump still had to take that shot at her. His wife also has high blood pressure and felt so unsteady she worried she might fall offstage, he said.

She said, You know my condition when I see my sons picture I cannot hold myself together, said Khan, becoming tearful. This country holds such a person in the highest regard, and he has no knowledge, no awareness. That is the height of his ignorance.

In her article on Sunday, Ghazala Khan wrote: I cannot walk into a room with pictures of Humayun … Walking on to the convention stage, with a huge picture of my son behind me, I could hardly control myself.

Khizr Khan said Trump lacked both the moral compass and sense of empathy necessary for any president. This candidate is void of both traits that are necessary for the stewardship of this country, he said.

Trump was sharply criticised by Clinton; Tim Kaine, her running mate; and Bill Clinton, the 42nd US president. Bill Clinton said: I cannot conceive how you can say that about a Gold Star mother, referring to the award given by the military to mark a death in combat.

On Sunday at Imani Temple Ministries in Cleveland Heights, Clinton said: [Khizr Khan] and his wife stood before our country to tell the story of their son, Capt Khan, who lost his life running toward danger to protect his soldiers. Mr Khan paid the ultimate sacrifice in his family, didnt he?

And what has he heard from Donald Trump? Nothing but insults, degrading comments about Muslims, a total misunderstanding of what made our country great: religious freedom and religious liberty. Its enshrined in our constitution, as Mr Khan knows because hes actually read it.

Clinton added: I dont begrudge anyone of any other faith or of no faith at all, but I do tremble before those who would scapegoat other Americans, who would insult people because of their religion, their ethnicity, their disability. Its just not how I was raised. Its not how I was taught in my church.

Later, on the campaign trail, she told reporters: Its hard to imagine anyone who has ever run to be president of the United States saying any of what [Trump has] said. And the accumulation of it all is just beyond my comprehension.

Trump also faced criticism from Republicans. Ohio governor John Kasich said on Twitter: Theres only one way to talk about Gold Star parents: with honor and respect. Capt. Khan is a hero. Together, we should pray for his family.

Khizr Khan said on Sunday that he and his wife had been inundated with support, including from distinguished Republicans who have seen the blackness of [Trumps] character.

Ignoring calls from some conservative commentators to cease hostilities with the Khans, Trump again insisted on having the final word. I was viciously attacked by Mr Khan at the Democratic Convention, he said on Twitter. Am I not allowed to respond?

Trump was also ridiculed for disputing Khans comment in his speech that Trump had sacrificed nothing and no one while disparaging Muslims including those, like his son, who had died for their country.

Asked whether he was seriously stating that this amounted to sacrifice, Trump replied: Oh, sure. I think theyre sacrifices.

Trump, who avoided the draft for the Vietnam war with a medical exemption for an apparent bone spur in a foot he has been unable to remember which one once said that avoiding sexually transmitted diseases had been his personal Vietnam.

After Trumps remarks were first published in advance of their broadcast on Sunday, the candidate issued a statement declaring: While I feel deeply for the loss of his son, Mr Khan who has never met me, has no right to stand in front of millions of people and claim I have never read the constitution, (which is false) and say many other inaccurate things.

The dispute over the memory of Humayun Khan was also picked up by the Islamic State terrorist group. The groups online magazine featured a picture of Khans tombstone in Arlington national cemetery in Virginia with the caption: Beware of Dying as an apostate.

The first two opinion polls taken after the end of last weeks Democratic convention indicated that Hillary Clinton had received a bounce in her ratings and had retaken a lead against Trump. Her national support stands at 44.5% against 43.4% for Trump, according to an average of polls by RealClearPolitics.

Late on Sunday, after McConnell and Ryan had failed to rebuke Trump over his attacks on the Khan family, Senate Democratic leader Harry Reid released a statement of his own.

This shouldnt be hard, he said. Donald Trump is a sexist and racist man who insults Gold Star parents, stokes fear of Muslims and sows hatred of Latinos. He should not be president and Republican leaders have a moral responsibility to say so.