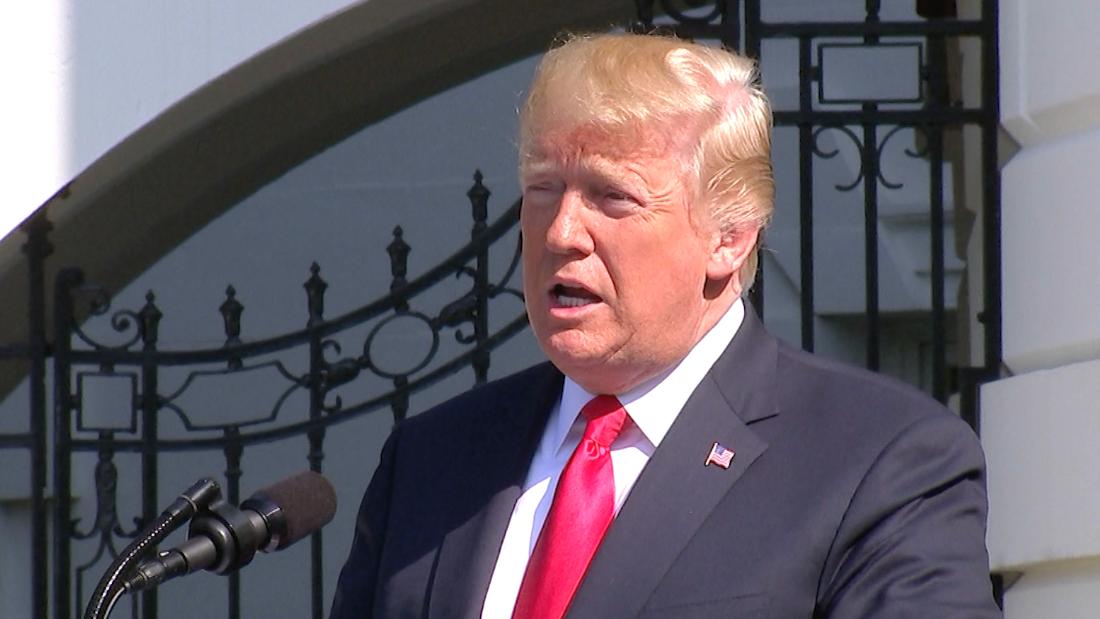 That tweet totals 47 words (and 277 characters — sliding just under Twitter’s 280-character limit). And despite its relative brevity, there are at least seven examples of exaggerations, mischaracterizations and outright falsehoods contained in it. That’s one for every seven words!
Let’s go through them!

This is, at best, an opinion. While Trump repeats “no collusion” like it’s his personal mantra, the reality is that we simply don’t know whether there was any collusion by anyone in the Trump campaign with any Russians — and Trump couldn’t possibly know either. What we can say is that there is no public evidence yet released that proves collusion. And in fact, what we learned last week gets us closer to collusion — or, in the criminal context, conspiracy — then anything we’ve known to date: Michael Cohen making clear he is willing to tell Mueller that Trump knew about the June 2016 meeting between Russians and his top campaign staff before it happened. Trump has continued to insist he knew nothing.

Mueller was initially appointed as the head of the FBI by Republican President George W. Bush. He was named special counsel by Rod Rosenstein, the deputy attorney general in the Trump administration. Mueller himself is a Republican. As for the idea of a “rigged witch hunt,” no one who is not directly on Trump’s payroll — or whose name is Devin Nunes — describes what Mueller is doing in anything close to those terms. “I don’t think it’s a witch hunt,” said South Carolina Rep. Trey Gowdy, a Republican, earlier this month. “I’ve never thought it was a witch hunt.”

3. “Headed by now 17 (increased from 13, including an Obama White House lawyer) Angry Democrats”

There’s a whole lot of exaggerating and assumption going on here. Of the 17 people we know are members of Mueller’s special counsel team, 13 have been previously registered as Democrats, according to The Washington Post’s Matt Zapotosky. The other four were either unaffiliated voters or their party affiliations couldn’t be determined. (It’s not at all clear how/why Trump is saying all 17 are “Angry Democrats.”)

Of the 17, nine have donated money in the past to Democrats, again according to Zapotosky. As he writes of the donations: “The majority came from one person, who also contributed to Republicans. Six donated to Hillary Clinton, Trump’s opponent in the 2016 race.” It is worth noting here, as I did above, that Mueller, who runs the probe, was appointed by Republicans to both the FBI and the special counsel role — and is personally a Republican.
Rosenstein had addressed the partisan composition of the special counsel team in testimony before Congress earlier this year. “We recognize we have employees with political opinions,” he said. “And it’s our responsibility to make sure those opinions do not influence their actions. I believe that Director Mueller understands that and that he is running that office appropriately.”

4 and 5. “Was started by a fraudulent Dossier”

Trump, as he often does, suggests that the only reason the Mueller probe exists is because of a “fraudulent dossier” on him put together by former British spy Christopher Steele.
That’s not right on two counts.
First, we know that the FBI launched a counterintelligence investigation in July 2016 into possible Russia involvement in the election after then-Trump foreign policy adviser George Papadopoulos had told an Australian diplomat in Britain that the Russians had dirt on Trump opponent Hillary Clinton. Australian officials passed along that information to US intelligence officials once hacked emails from the Democratic National Committee and Clinton campaign chairman John Podesta emerged. There’s no question that Steele’s dossier has also played some part in the Russia investigation by Mueller, though it’s not clear exactly how large a role. What is clear is that the dossier was not why the investigation began.

Second, Trump’s assertion that the entire dossier is “fraudulent” is inaccurate. While the more salacious details in it have not been confirmed by the US intelligence community, there are elements of the dossier that have in fact been corroborated. Back in February, CNN reported this: “For the first time, US investigators say they have corroborated some of the communications detailed in a 35-page dossier compiled by a former British intelligence agent, multiple current and former US law enforcement and intelligence officials tell CNN.”

6. “Paid for by Crooked Hillary and the DNC”

7.”The witch hunt is an illegal scam”

I have zero idea what Trump means by “illegal.” After all, this probe is being run by his Justice Department. It’s not clear what law they would be/are breaking. As to the “scam,” it’s important to remember that Mueller has issued 191 criminal charges against 32 individuals and three companies in the course of the special counsel probe. Five people have already pleaded guilty in relation to the probe and several are now cooperating with Mueller, including former Trump administration national security adviser Michael Flynn and former Trump deputy campaign chairman Rick Gates.