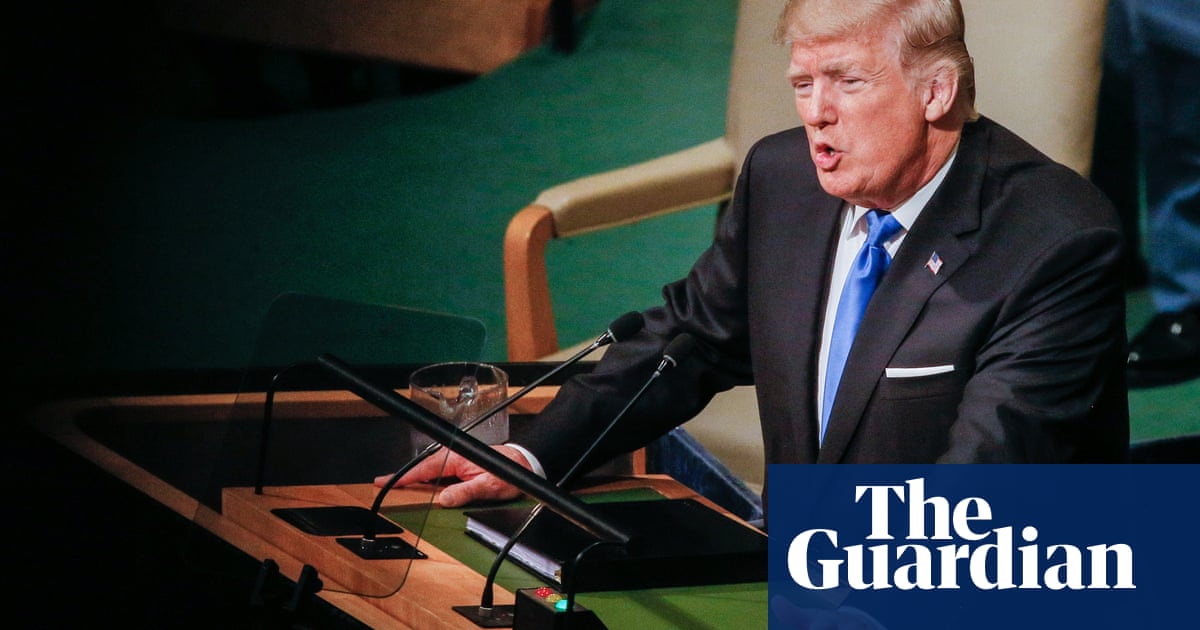 The official theme of this year’s UN general assembly is “making the United Nations relevant to all people” but everyone attending next week’s sprawling summit in New York knows that one person is more relevant than others.

He will chair a meeting on drug trafficking on Monday, address the full assembly on Tuesday and then preside over a security council session on nuclear perils on Wednesday. No one doubts he will use those appearances to show disdain for diplomatic niceties for the benefit of his supporters and bang the drum of “America First”.

World leaders were braced for surprises when Trump made his UN debut last year, but he still managed to shock, using his speech to threaten to “totally destroy” North Korea. This time, his counterparts arrive in New York having had a year to work out how to manage their relations with him.

But that does not mean they can predict what he will do or say.

“Last year, there was a tremendous amount of uncertainty about what President Trump would be like – and what he would do and how to talk to him,” said Jon Alterman, a former senior state department official and now vice-president of the Centre for Strategic and International Studies.

Every world capital has by now worked out that flattery and money has to be the heart of any Trump strategy. The Polish president, Andrzej Duda, staged a masterclass in the White House this week, offering semi-seriously to name any new US base in Poland “Fort Trump” while offering to pay for it, and buy US liquefied natural gas.

In reality, Poland does not have facilities to import LNG in bulk and is only ready to pay for the basic infrastructure for a base, but such details were left for another day. The mutually profitable theatre of the summit is what counted.

The leaders of North and South Korea have learned the same lesson. Kim Jong-un and Moon Jae-in have used their meetings with Trump to reassure him that he is an indispensable peacemaker, paving the way to a situation in which Pyongyang is able to maintain a nuclear arsenal while lifting the threat of imminent conflict.

Moon, who has gone as far as to say Trump should win the Nobel peace prize, will come to New York for a bilateral meeting with the US president fresh from a visit to Pyongyang, in which Kim made undertakings to dismantle parts of his country’s nuclear weapons infrastructure.

Nuclear experts have cast doubt on these concessions, pointing out one involved an old testing site for liquid fuel rocket engines while North Korea has progressed to solid fuel, and an offer to dismantle the main nuclear complex at Yongbyon is contingent on unspecified “corresponding measures from the US”. Trump, however, has welcomed the developments as “tremendous” and “exciting”.

For domestic reasons both Kim and Moon have strong reasons to project their meeting as a sparkling success, paving the way to an expected second summit between Trump and Kim.

Japan’s prime minister, Shinzo Abe, has a tougher task than Moon. He has to use his meeting with Trump to praise the US president’s diplomacy while seeking to rein in his inclination to embrace and reward Kim for the mere appearance of disarmament.

Trump’s top diplomats face a similar dilemma. They are required to express wonder at his breakthrough while attempting to maintain international cohesion around sanctions on North Korea, in the hope of forcing genuine disarmament.

“It’s a chance for us to look at what we’ve achieved in progress on North Korea,” the US envoy to the UN, Nikki Haley, said. “It’s a chance to get the commitment we want on peace, but it’s also a chance to have the conversation that if we don’t enforce the sanctions, all of this can go away.”

Haley predicted that in his set-piece speech on Tuesday morning, Trump would sound some of the same combative notes as last year, with the same theme, the supremacy of US sovereignty in his decision-making. Alliances and foreign assistance would be assessed through the prism of loyalty.

“He will talk about foreign aid, how generous the US is,” the envoy told reporters. “But he’ll also lay down a marker that while the US is generous, we’re going to be generous to those who share our values, generous to those who want to work with us, and not those who try to stop the US and say they hate America and are counterproductive to we are doing.”

That approach will clearly be applied to US efforts to inflict economic damage on Iran, with American diplomats being sent out to cajole and threaten allies into supporting Trump’s decision to walk out of the 2015 nuclear agreement with Iran, known as the JCPOA.

That has been uphill struggle. Wednesday’s security council session chaired by Trump was initially meant to be devoted to Iran, but when it became clear that risked highlighting US isolation in the council over the JCPOA, the subject matter was widened to combatting the wider issue of proliferation, encompassing North Korea, the Russian use of nerve agent in the UK, and Syria’s use of chemical weapons.

“[Trump] didn’t want to be limited,” Haley said. “I think we are going to expand it forward but Iran is certainly going to be part of all that conversation as we talk about all weapons of mass destruction.”

Trump does not seem to have been fully briefed on the change of topic. On Friday, he tweeted that the session would be on Iran.

Iran’s president, Hassan Rouhani, will also be in New York, and the number of other leaders who seek meetings with him will be a gauge of their readiness to defy Trump over Iran. Abe’s plans to meet his Iranian counterpart is widely being seen in Japan as a gesture of independence.

Given Trump’s volatile record, no one is ruling out the chance that he could take the UN by surprise and meet Rouhani himself – casting himself once more as a peacemaker, as he has with North Korea, in the midst of a crisis he helped create.