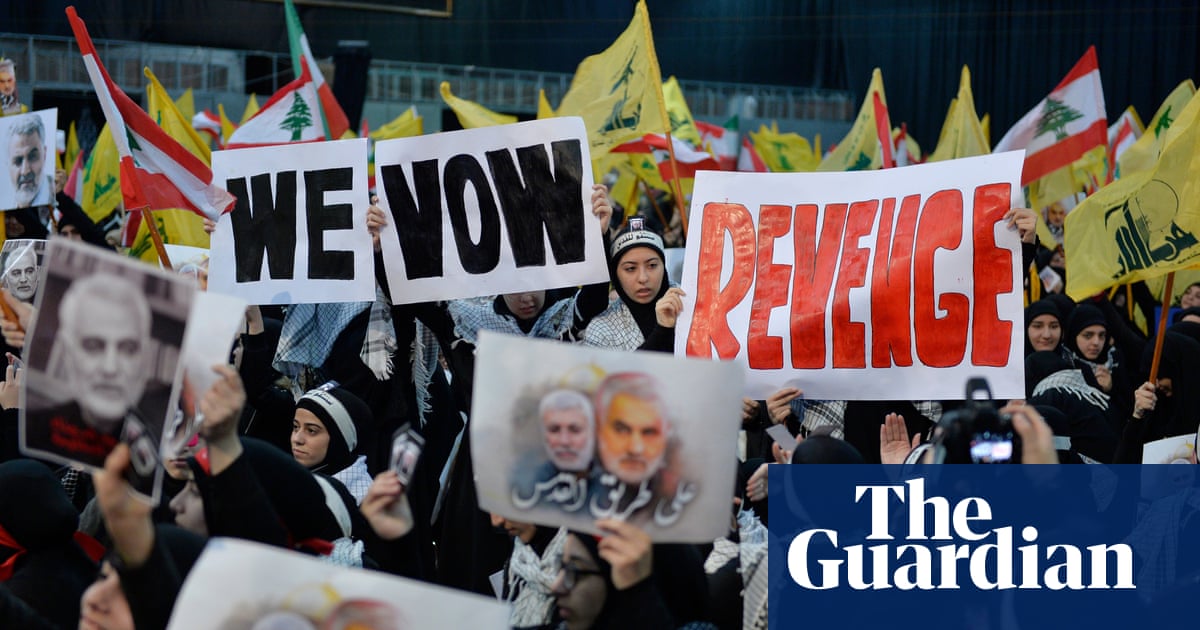 The threats emanating from Twitter feeds and podiums in Tehran and Washington might suggest the moment for diplomacy has long passed, and some form of war between the US and Iran following the assassination of Qassem Suleimani is now inevitable.

The only consideration that might hold the two sides back is the possible consequences. Tehran has tasted the unpredictability of Donald Trump and however much the desire for revenge beats in the hearts of Iranians, European leaders are pleading with Tehran’s leadership, saying it has a responsibility to use its head and recognise any direct attack on US assets in the Middle East is likely to be met with a further escalation by Trump.

A number of European diplomats privately say it is notable that among the chants of “death to America”, some Iranian military leaders have spoken more cautiously about a response, stressing it will occur at a time and on a target of Iran’s choosing. For the past year, Tehran has conducted attacks on the US and its allies through plausible deniability, using proxies and militias. A full-frontal assault on Washington by the Revolutionary Guards would be suicidal. The US has about 60,000 troops in the region, including about 5,200 in Iraq.

Those sums may give diplomats the narrowest window of opportunity to try to de-escalate the crisis. Dominic Raab, the UK foreign secretary, is heading to the US on a pre-arranged visit and will press the White House to think more strategically about its involvement in the Middle East. Many in the Pentagon will be privately urging the same.

The EU foreign affairs chief, Josep Borrell, has also invited the Iranian foreign minister, Javad Zarif, to Brussels, and it is possible Tehran will take up the offer. The EU has been rightly criticised in the past for being insufficiently active in the Middle East.

There are also lines of communication open to Tehran via Oman, Japan or through the Swiss embassy – the formal conduit for communications between Tehran and Washington.

Iran may also calculate that it has political as well as military avenues to pursue for long-term advantage.

It is already a posthumous victory of sorts for Suleimani that the Iraqi parliament has voted to support the expulsion of US troops. Many of Suleimani’s years of political work in Iraq were spent trying to build up pro-Iranian forces, and Iran’s politicians will press the Iraqi prime minister, Adel Abdul Mahdi, to quickly enforce parliament’s will. It speaks volumes that he felt compelled to take part in the tributes paid to Suleimani in Baghdad against a backdrop of anti-American slogans.

Mike Pompeo, the US secretary of state, has claimed Iraqis responded to the assassination of Suleimani by dancing in the streets, but the assassination has weakened anti-Iranian forces in Baghdad, including the nationalist protesters in Tahrir Square opposed to Iran and the US using Iraq to fight out their geopolitical battles.

Restraint by Tehran now might strengthen pro-Iranian factions in Iraq as fresh efforts are made to find a new prime minister. A more pro-Iranian mood may also sweep through other capitals in the Middle East as public opinion recoils at Trump’s threats.

It was notable for instance that Qatari leaders rushed to Tehran to convey their support, even though tens of thousands of US troops are stationed in Qatar. Equally, both the United Arab Emirates and Saudi Arabia, the two Gulf states closest to the US, have issued very cautious remarks about the killing of Suleimani. Saudi Arabia stressed it had not been consulted about the drone strike in Baghdad.

Full-throated support for the US would not only make these countries possible targets for Iran, but also inflame domestic opinion. Lines of communication, often indirect and faltering, have been opening between Iran and Saudi Arabia for months, and while it is too early to talk of a thaw, Tehran now has cards to play with Riyadh that it did not previously possess. There has rarely been a US president less capable of cultivating public opinion in the Middle East. The threat to destroy Iranian cultural sites will leave allies in the region queasy.

Iran will also work the court of legal and public opinion over the legality of the drone strike that killed Suleimani. Even Raab did not quite condone Trump’s actions, saying instead that he understood them and condemning Suleimani’s efforts to destabilise the region.

But Iran is not well suited to the moral high ground. The political mood will demand some form of retribution and response. The fifth and final step announced by Tehran away from the 2015 nuclear deal with world powers includes ceasing to recognise any operational restrictions on its civilian nuclear programme. It also means an end to restrictions on centrifuges.

Some will say Tehran’s announcement marks the effective end of the nuclear deal, but by allowing continued independent inspections and not pushing the levels of uranium enrichment to 20%, the continuing European signatories to the agreement can still monitor Tehran’s compliance. As such, it is possible to interpret Iran’s position as wanting to engage with European nations and not put them in the same category as the US.

But a new gesture by France, Germany and the the UK to keep the deal alive may be required. Tehran has persistently claimed European efforts to increase trade with Iran have been limited.

Emmanuel Macron failed in the autumn at the UN general assembly to bring about a reconciliation between Trump and the Iranian president, Hassan Rouhani. The French president proposed a three-month pause in US sanctions and, in return, a renewed Iranian willingness to renegotiate the nuclear deal as part of a broader settlement.

The chances of reviving such a complex proposal in the current climate look extremely slim. Indeed, the only force moving in diplomacy’s favour is that the alternative might be an all-out conflict.