Brazilian president stands firm amid corruption scandal, saying in an interview that any attempt to remove her would be illegal and harmful to the country 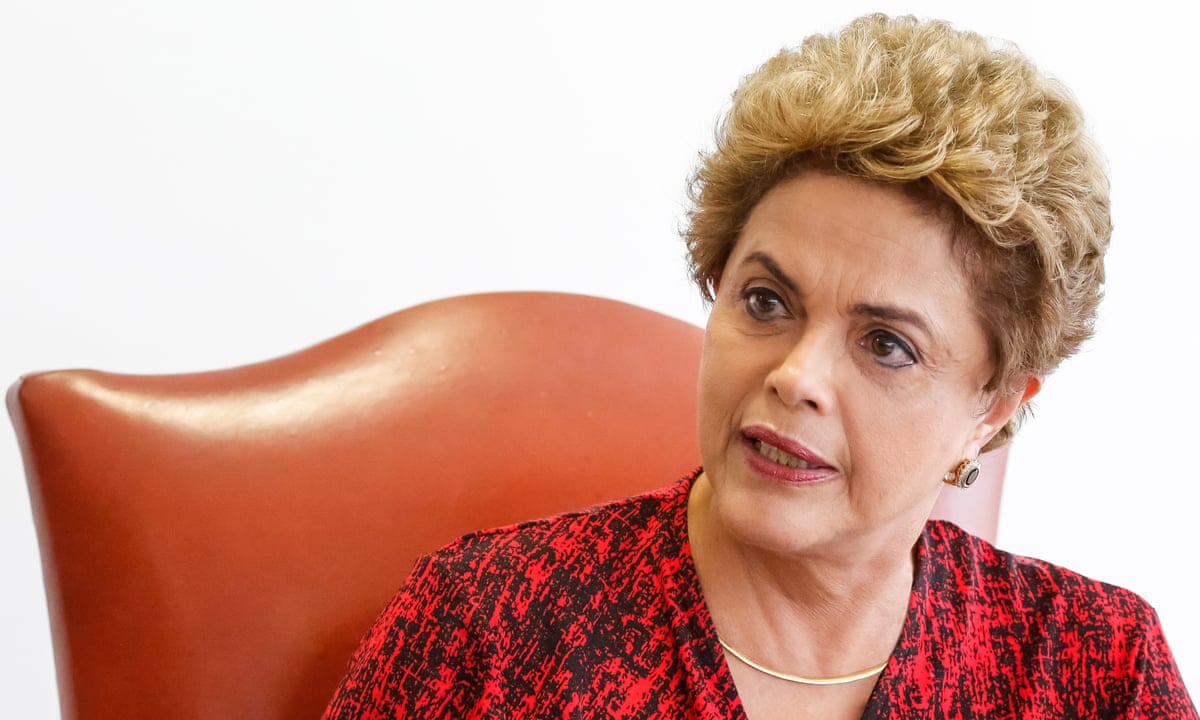 A defiant President Dilma Rousseff has insisted that there is no legal justification for her impeachment and warned that any attempt to remove her from power illegally would leave lasting scars on Brazilian democracy.

In a 90-minute interview with six foreign media organizations in Planalto, the presidential palace, Rousseff stated that peace would reign in Brazil by the start of this years Olympic Games, due to take place in Rio de Janeiro in August.

Over the past few weeks, Brazil has been shaken by huge anti-government protests, as revelations over the countrys worst-ever corruption scandal add momentum to an impeachment process that began in December.

The presidents attempt to appoint her predecessor, Luiz Incio Lula da Silva, to cabinet last week in what critics argue is a move to shield him from prosecution added to widespread public outrage at politicians impunity and prompted calls for Rousseffs resignation.

Why do they want me to resign? Because I am a weak woman? Im not, she said, arguing that her political rivals wanted her to stand down to avoid the difficulty of removing unduly, illegally and criminally a legitimately elected president from power.

Pushed as to why it was necessary for Lula to become a minister, rather than serve as an adviser, Rousseff said he had repeatedly turned down her requests to join her government, but now that the crisis had deepened he was doing it as a service for Brazil.

I became his cabinet chief in 2005 in the middle of the mensalo [cash-for-votes scandal], she said. I know I helped him then, and I know he can help me now.

The impeachment process currently in congress accuses Rousseff of using illegal accounting manoeuvres to balance her governments books, but she insists that the legal basis for the accusation is extremely weak.

Rousseff has proved herself a fighter. As a leftwing guerrilla during the dictatorship era, she was imprisoned and reportedly tortured.

Rousseff noted that every president since the time of Getlio Vargas (who ruled from 1930 to 1945) have had impeachment processes launched against them. She also noted that the man who initiated the case against her, Eduardo Cunha, the speaker of the lower house of congress, has been charged with corruption.

In the presidents opinion, the opposition failed to accept their narrow defeat in the 2014 election and since then have pursued a strategy of the worse, the better, by sabotaging her legislative agenda and sinking the country.

As for the demonstrations, Rousseff stressed that she was in favour of street protests, because she came from a generation in which if you opened your mouth you could go to jail.

But she pointed out that those who have taken to the streets against her government represent less than 2% of Brazils entire population, and criticised the fascist methods used by some of her opponents.

We have never seen such intolerance in Brazil, she said. We are not an intolerant people.

The past month has been one of the worst in a spectacularly rough second term for the president, who was re-elected in 2014 in one of the closest campaigns in Brazils political history.

Despite a clear mandate, she has had to deal with a hostile congress, an unreliable coalition partner and a corruption investigation that has moved ever closer to the highest level of her Workers Party.

Rousseff believes that any attempt to remove her from power without legal justification would represent a coup.

I am not comparing the coup here to the military coups of the past, but it would be a breaking of the democratic order of Brazil.

Such a move, she said, will have consequences. Maybe not immediately, but it will leave a deep scar on Brazilians political life.

For more than a year, there has been a steady drip drip of grim news for Rousseff: the economy is in the midst of its biggest decline in a century, ratings agencies have downgraded Brazils sovereign debt to junk status and unemployment is rising.

Meanwhile, the presidents popularity has crashed, the finance minister resigned, and the corruption scandal has paralysed Petrobras the biggest company in the country and led to the jailing of the head of the leading construction firm, Odebrecht.

Personally and politically, however, the biggest crisis for Dilma has been that sparked by a prosecution investigation into alleged wrongdoing by her predecessor and mentor, Da Silva.

The former president universally known as Lula was detained for questioning and his home and other properties searched earlier this month. Soon after, Rousseff invited him into her cabinet, thereby taking jurisdiction away from the lower court judges who had approved the warrants for the search and interrogation.

Asked by the Guardian about her decision to appoint Lula, a move that is currently suspended awaiting a final supreme court decision, Rousseff was unrepentant.

Lula is not just a talented negotiator, he also understands all of Brazils problems, she said, insisting that the idea that he has been appointed to avoid scrutiny did not make sense.

They included a conversation with Dilma in which she told him she has a ministerial post ready for him in case it is necessary. Although ambiguous, this was interpreted by her opponents (and some supporters) as proof that the two were colluding to help the former president avoid prosecution.

Calm and seemingly upbeat throughout the interview, the only time Rousseff expressed irritation was when she recalled Moros leak of the phone tap.

Violating privacy breaks democracy because it breaks the right of every citizen to a private life, she said, banging the table.

Accepting that she had been recorded by accident, Rousseff argued that the correct action for the judge to have done would have been to pass the tape to the supreme court, not the media.

In a veiled criticism of Moro, the president said, a judge must be impartial. A judge cannot rule with political passions.

Despite having been on the board of Petrobras and a minister of mines and energy, Rousseff has consistently denied knowing anything about the massive corruption scheme that took place at the company.

During the interview she insisted that there was a big difference between a companys board of directors and its executives, adding that none of her fellow directors had known about the corruption. She also pointed out the anti-corruption measures that she had instigated during her government, including the law which allows suspects to offer plea-bargain testimony, a development which has significantly facilitated investigators.

As well as the impeachment process, Rousseff also faces investigation by Brazils supreme electoral court over allegations that her 2014 election campaign received financing from the Petrobras scandal.

But the president categorically denied that her campaign benefited from any illegal donations and said she was not worried about the contents of the plea-bargaining testimony of her election guru, Joo Santana.

The president said that she was sleeping well and insisted that Brazils current political crisis was not getting her down.

I think you only get depressed when you feel guilty about something, she said. I have never used my powers to favour people who I shouldnt have favoured.