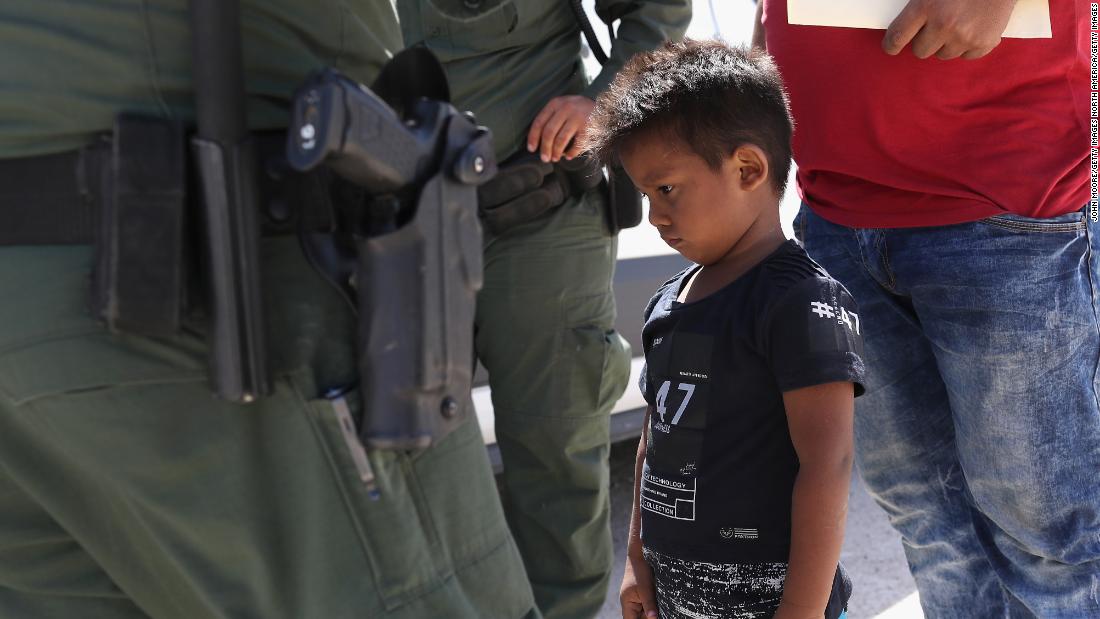 Washington (CNN)President Donald Trump’s executive order reversing course on family separations has not changed anything in terms of putting families that have already been separated back together, a government official confirmed Wednesday.

The executive order does not speak to any families that have already been separated — and existing policies place the onus on parents to find their children in Department of Health and Human Services custody and seek to reunite with them.
On Wednesday afternoon, an HHS spokesman said nothing had changed for the children in its care.
“For the minors currently in the unaccompanied alien children program, the sponsorship process will proceed as usual,” HHS spokesman Kenneth Wolfe told CNN.
Later Wednesday, the agency put out a statement from Brian Marriott, a senior communications official at Administration for Children and Families, the same division of HHS. Though the statement said Wolfe “misspoke” about the executive order, Marriott did not say a clear plan for putting children back with the parents they had been separated from was in place.
“It is still very early and we are awaiting further guidance on the matter,” Marriott said. “Our focus is on continuing to provide quality services and care to the minors in HHS/ORR funded facilities and reunifying minors with a relative or appropriate sponsor as we have done since HHS inherited the program. Reunification is always the ultimate goal of those entrusted with the care of UACs, and the administration is working towards that for those UACs currently in HHS custody.”
The Department of Homeland Security did not immediately respond to a request for comment about its own plans to implement the executive order.
The sponsorship process — which finds friends, relatives or other suitable volunteers in the US for children in the custody of HHS — is built mainly for children who come to the US illegally alone, as has traditionally been the focus of HHS. 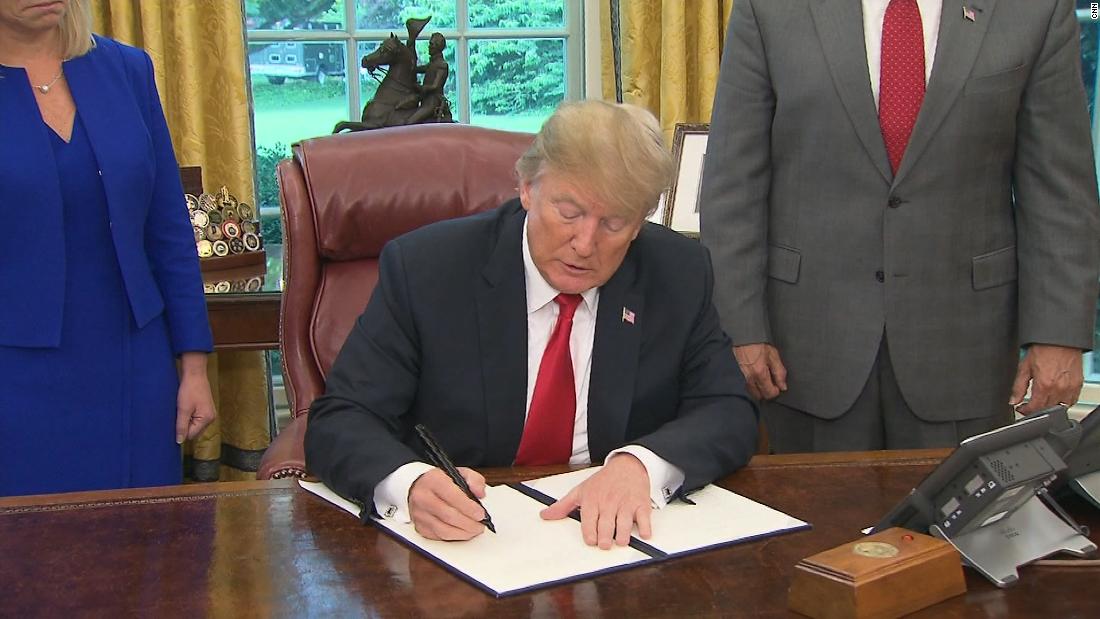 But Trump’s decision to criminally prosecute all adults caught crossing the border illegally — even if they have children with them — has resulted in thousands of children being separated from their parents and essentially defined as alone, then placed in HHS custody.
The existing sponsorship process does not include any procedures for proactivelyreuniting children with parents who brought them to the US and may be in government custody, though theoretically once released from custody a parent could apply to sponsor their child’s release.
HHS Secretary Alex Azar said at a Washington Post event on Wednesday that his agency tries to keep track of parents.
“We keep in touch with the parents,” Azar said. “Even under any circumstance we’re working to always be in touch with the parents to ensure placement with relatives, and if parents are released, to ensure that they can go to the parents if the parents are appropriate sponsors, if there’s no reason why a child would be in jeopardy. We’ll keep working to place them with sponsors.”
But that is not the process described by those on the ground — nor articulated in any information about reunification distributed by the agencies to parents or reporters.
In a fact sheet updated on June 15, Customs and Border Protection says Immigration and Customs Enforcement is working to dedicate a facility that can be a “primary family reunification and removal center,” where parents who are ready to be deported can “normally” be detained.
It also says, “ICE will work with detained parents to provide regular communication with their children through video teleconferencing, phone and tablets.”
According to government figures, thousands of children have been separated from their parents already. From April 19 through the end of May, 1,995 children were separated due to the administration’s zero tolerance policy, and 2,342 were separated from May 5 to June 9. The administration has not provided a total number for those overlapping time frames, nor information on how many children are still in government custody or have been returned to their parents.
Advocates working with immigrants say the system is anything but straightforward and functional.
The process to find one’s child is “incredibly challenging and what I fear is that it might, in some cases, be impossible,” said Wendy Young, president of the advocacy and legal support organization Kids in Need of Defense and an immigration policy expert.
“It’s just very difficult to find somebody, especially after the parent’s been deported,” Young said, saying parents often return to remote, rural areas without stable phone lines. “The other thing to remember is that these people are going back to the same dangerous circumstances they fled … and they are targeted once they’re back.”
Over the weekend, after visiting a temporary children’s shelter in his district and asking the government for its reunification plans, Rep. Will Hurd said he wasn’t satisfied that there was any plan for putting families back together.
“That’s nuts,” the Texas Republican said.

A series of barriers make it very difficult for parents who have been separated from their children under the administration’s zero tolerance border policy to reunite with them, according to experts on the system and those who work with immigrants.
Parents are supposed to call hotlines to find their children, but they’re difficult to navigate. Many of the families come from remote areas in Central America and are unfamiliar with US systems, and are likely to be distrustful of government. They’re housed in facilities with limited access to phones and the ability to receive calls. The government does not provide any legal representation to immigrants in deportation cases automatically, so it is up to the detained immigrants to find lawyers who can help them.
Once the parent is in an adult detention facility, it is unlikely HHS can release their child back to them, as they would not qualify as a sponsor. The DHS has not made clear any policy to move those parents to family detention to be reunited with their kids, aside from its designated removal facility.
“When the family separation policy was implemented, there doesn’t seem to have been any planning as to how parents were going to know where their children were, how children were going to know where their parents were, how they were going to be able to communicate and how they would be able to be reunited,” said Mark Greenberg, an expert at the Migration Policy Institute who ran the HHS department that cares for undocumented children in the previous administration.
“So at this point there are probably several thousand children in the custody of (HHS) in shelters for unaccompanied children and large numbers of them probably don’t know where their parent is and don’t know how to communicate with their parent,” he continued. “And when parents are in detention, there are clearly significant problems in being able to talk with their children. When parents are being deported, there doesn’t seem to be any process in place for figuring what happens next for their children.”
Once adults are referred for criminal charges and turned over to federal law enforcement, their children are deemed unaccompanied alien children and given to HHS.
Their cases are then split — for the immigration courts who will decide if they stay in the US and in terms of which government agency is housing and keeping track of them.
Because adult cases tend to move much more quickly than those for children, parents may get deportation orders before their kids’ cases are heard.
Even if they don’t, advocates who work with the families say it can take months for families to be reunited. The American Civil Liberties Union is representing families in a court case challenging separations and says it’s been eight months for one parent who has yet to have their kid returned, even though the parent is out of detention.
Experts who work with the families that have already been separated, like Young, say they are working with people in Central America that they believe have already been deported by this administration without their kids.
The policies do provide for a hotline parents can call, in theory, to locate their children. But advocates who have worked with immigrants trying to use the hotline have described a confusing and ineffective process.
Agencies have also distributed flyers to immigrants with information about the process in English and Spanish. The flyer gives them the numbers and says the government will work across agencies to schedule regular phone communication, but advocates say it doesn’t seem to be working.
Forms for parents to fill out for HHS obtained by CNN explain to the parents in Spanish that their children are considered unaccompanied minors and that they can offer up information about potential sponsors for their children. But if they don’t provide that information, the document says, the government cannot guarantee the child will be placed with someone of the parents’ choice.
In ICE custody or in jail, parents can’t receive phone calls. Meanwhile, most HHS facilities require people trying to speak with a child to leave their information for a call back, so that HHS can make sure the person is someone authorized to speak to the child, advocates say.
“The bottom line is they didn’t think through family reunification when they launched this policy because it wasn’t of interest to them. It wasn’t a concern,” Young said.
“It’s deeply concerning that it’s not clear if there are any plans for how to provide for reunification of the separated families and children,” Greenberg echoed. “As a threshold matter, it will be very difficult to do reunification if parents and children don’t know where each other are.”