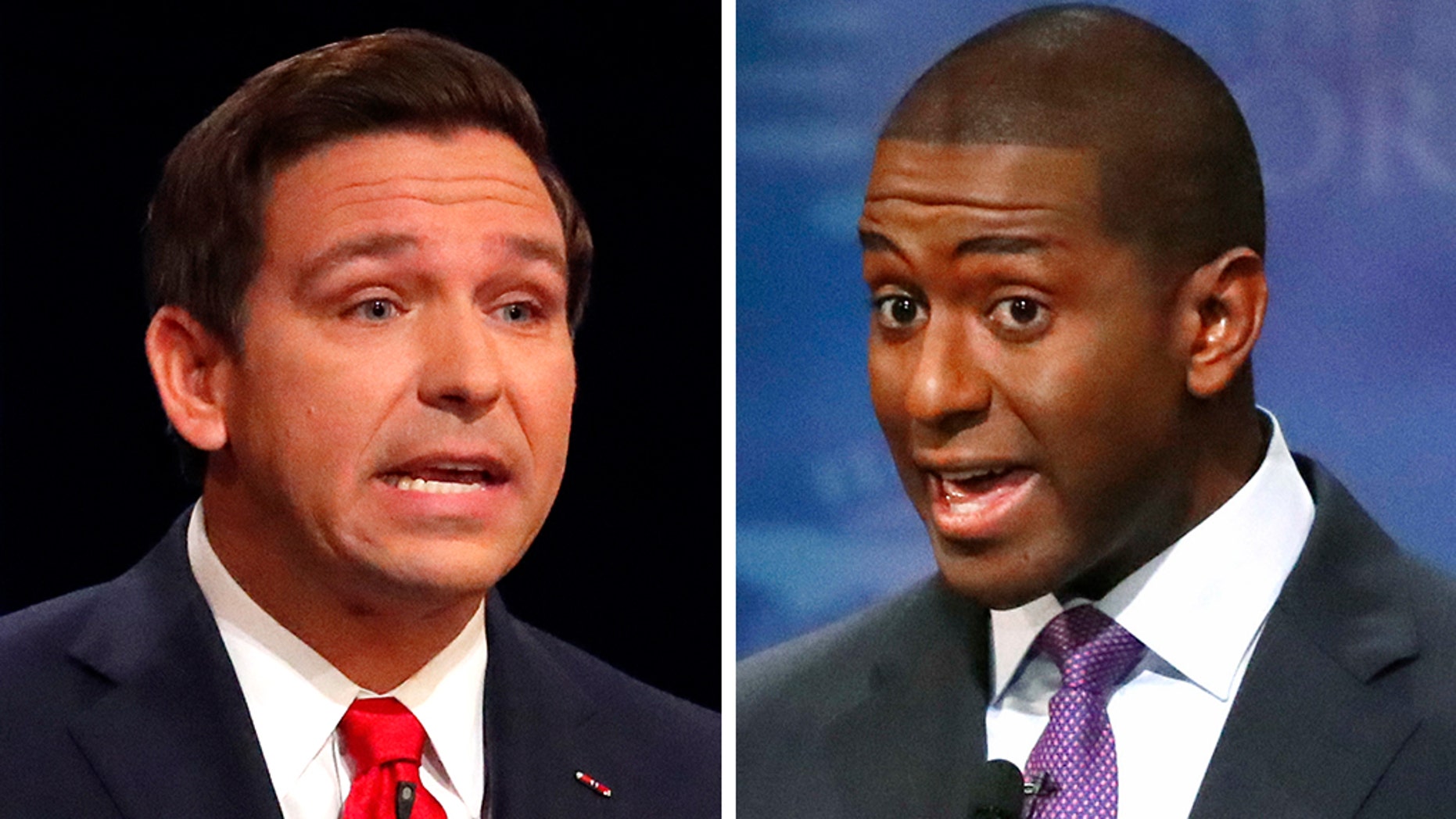 The candidates for Florida governor assailed political divisiveness, calling for unity and bemoaning the collapse of political discourse in their second and final debate on Wednesday near Fort Lauderdale.

But there was name-calling, too.

Democratic Tallahassee Mayor Andrew Gillum, a frequent critic of President Trump, called Republican former Rep. Ron DeSantis, an outspoken Trump supporter, a liar who should be disqualified from being elected.

He also charged DeSantis with running dishonest ads, specifically over the issue of immigration.

He said, “My opponent … has run this race very, very close to the Trump handbook, where we call each other names, where we run false advertisements.”

The debate focused to an extent on Gillum’s acceptance of tickets to the Broadway musical “Hamilton” from an undercover FBI agent in the summer of 2016 — a revelation in documents made public on Tuesday in connection with a state ethics commission probe. The records include text messages between Gillum and former lobbyist Adam Corey. An attorney for Corey turned over the documents to the ethics panel in response to a subpoena. The commission has been investigating a complaint brought against Gillum related to trips he took to Costa Rica and New York City.

Gillum has asserted that he paid for all expenses related to both trips, as Fox News previously reported.

“I arrived at the theater and received the ticket from my brother,” Gillum said during the debate. He explained that he thought his younger brother, Marcus, had exchanged Jay-Z and Beyoncé tickets for the “Hamilton” tickets.

“I should have asked more questions to make sure that everything that transpired was above board,” Gillum said.

He moved on from the controversy by referencing rap lyrics by Jay-Z: “In the state of Florida, we got 99 issues, and ‘Hamilton’ ain’t one of them.”

“He’s apologizing because he got caught,” DeSantis responded.

Gillum said he isn’t a subject of the FBI probe.

“He wants you to believe that he’s not under investigation,” he said. “Why would an undercover FBI agent posing as a contractor give him a $1,000 ticket to ‘Hamilton’?”

DeSantis at one point angrily responded to moderator Todd McDermott’s question about his decision to speak at events organized by someone who has made racially inflammatory comments.

“How the hell am I supposed to know every single statement somebody makes?” DeSantis said, his voice rising.

Gillum who is seeking to become the state’s first black governor, questioned the company DeSantis keeps: “My grandmother used to say a hit dog will holler and it hollered through this room. … He’s got neo-Nazis helping out through this state. … I’m not calling Mr. DeSantis a racist. I’m simply saying the racists consider him a racist.”

DeSantis responded by dodging the accusations, noting he wouldn’t “bow to the altar of political correctness.”

The themes of conflict with no middle ground emerged several times through the hourlong debate, in which the candidates clashed on health care, education, guns and the economy,

DeSantis reiterated he would have vetoed a bill signed by Republican Gov. Rick Scott three weeks after February’s mass shooting at Marjory Stoneman Douglas High School that raised the age limit to buy a rifle from 18 to 21 and imposed a three-day waiting period on rifle purchases.

He believes the increased age limit for buying rifles will be found unconstitutional. Instead of adding gun restrictions, he said, the state should tighten school security and blamed the massacre, which left 17 dead, on local and federal officials who did not stop suspect Nikolas Cruz despite numerous warnings.

“The way to keep our communities safe is to work with law enforcement, not against law enforcement, and you need to identify those individuals who should not have access to firearms,” he said.

Gillum said he would have pushed for a stronger bill than Scott signed.

“If you want to own the power of God at your waist belt, you should have a background check. If you are a domestic violence abuser, convicted, you should not have a gun where you could snuff out the lives of your loved ones,” Gillum said.

Gillum defended his proposal to raise corporate income taxes. Gillum said it would only raise taxes on the top 3 percent of the richest corporations and it is only a fraction of the $6.3 billion they received from a tax cut Trump signed into law.

“All we’re simply saying is that they can keep $5.3 billion but we deserve a billion of that to come into this state” for education, he said.

DeSantis replied, “Businesses will leave the state, people will lose jobs, and we’ll stop people from investing in Florida. It will be a historic mistake.”

The winner of the election will replace Scott, who is barred from seeking a third term.

Democrats have not won the office since 1994.