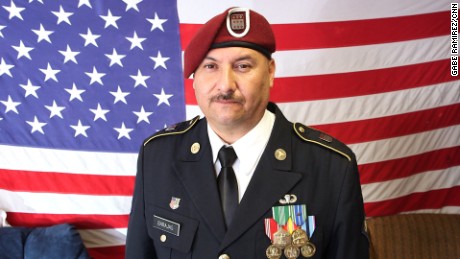 Tijuana, Mexico (CNN)In a strip mall on a dusty street, a group of U.S. military veterans gather. Like any group of old soldiers, they joke, swap stories and keep each others’ spirits up. But they aren’t in Texas or California. This isn’t a local VFW. This is Tijuana, Mexico a place most of these men barely knew before being banished here.

These veterans consider the United States home. Mexico is not the country they swore to protect before shipping off to boot camp.
The gathering place is called the Deported Veterans Support House or “The Bunker.” It’s a safe house for deported veterans founded by a deported U.S. veteran in 2013. That veteran, Hector Barajas, was brought to the United States from Mexico by his parents when he was seven years old in 1984. He grew up in Compton, California and like many kids, he dreamed of being a soldier.
He held a green card so he was able to enlist with the hopes of earning citizenship. But the Army was more than a means to an end for Barajas. He really loved being a soldier and proudly served in the 82nd Airborne Division from 1995 to 2001.
READ: Veterans Day: Family’s anguish in 45-year search for MIA pilot
Barajas should have been an American success story. But several bad choices led him to that dusty street in Tijuana. His most important choice is what has tripped up many of the men at The Bunker. He didn’t solidify his immigration status while on active duty.
“I was under the assumption that, you know, I took the oath and that I’m a U.S. citizen, “Barajas said, pointing out that the oath of enlistment is similar to the oath of naturalization. “You’re 18 years old and hey, Uncle Sam’s going to take care of you,” he said. And critically, Barajas claims the Army never prepared him for moving through the naturalization process. “Citizenship was never mentioned,” he said. “I was never counseled, there’s no program for it.” 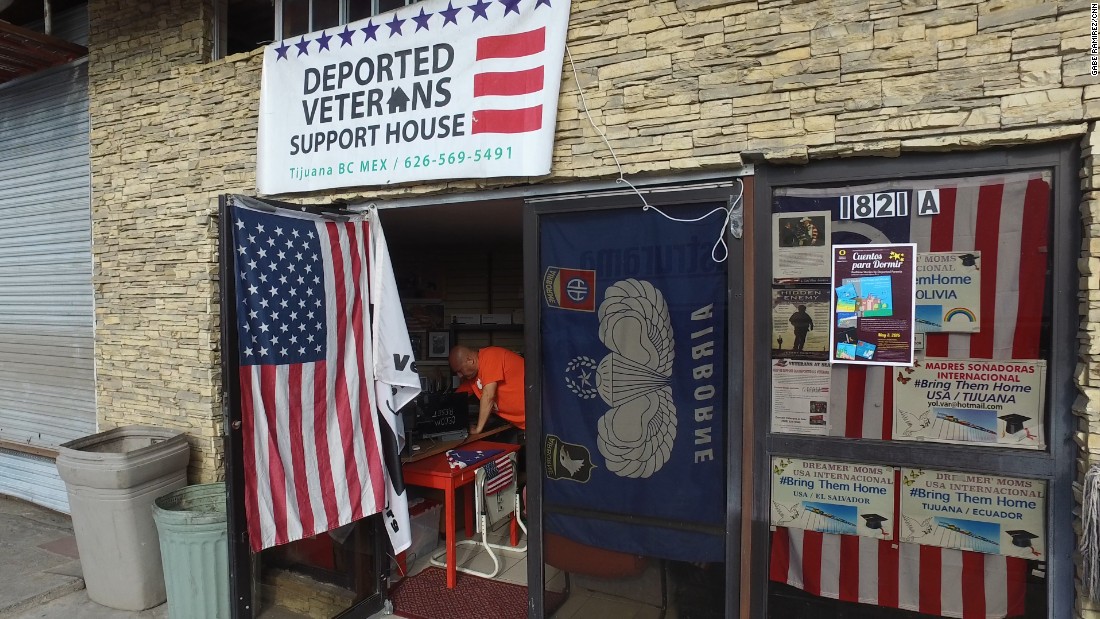 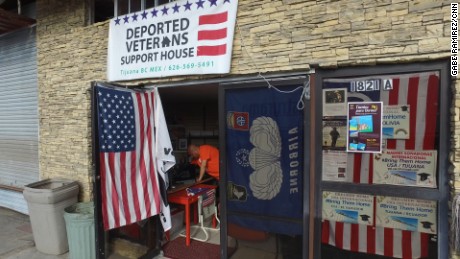 The military does have assistance. However, it is up to individuals to seek out the help they need. A Department of Defense spokesperson told CNN, “Legal Assistance offices on our installations are available to assist Green Card holders thru the process. [The United States Customs and Immigration Service] also has offices on most Military Initial Training Sites that can assist individuals in the process.”
READ: Veterans Day: Michael Stokes shows wounded warriors in a new light
Like many soldiers, Barajas struggled with alcohol and drugs during the closing days of his Army career. After serving six years, he was honorably discharged. But when he returned to Compton, his demons followed him. He struggled to adjust to civilian life. One night, he was arrested for shooting a gun from his vehicle. Even though nobody was hurt, he was charged with assault. He pleaded guilty to illegal discharge of a firearm and served two years in jail. Just as he finished serving his time, freedom in sight, his real nightmare started.
He was informed that because he was a green card holder and not a citizen, he was no longer able to stay in the United States. His six years in the US Army meant nothing. There was no redemption for his plea of guilty or for his time served in jail. He was deported to Mexico, leaving his daughter behind.
“When I got in trouble, I paid my debt to society. I owned what I’ve done,” he said. “We did what most American’s won’t do — we put our life on the line — I think it’s unjust that we’re deported American veterans. Why not change those laws?”
READ: Injured U.S. vets now hunting child predators
Barajas is not alone. He’s the leader of a group of banished veterans who live in Tijuana, Mexico. There are no studies or hard numbers on deported veterans, but Barajas estimates 40 or so have come through “The Bunker” over the years. Most of them didn’t grow up in Mexico. Some of them don’t even speak Spanish.
“The Bunker” is where they work on trying to return home, an effort led by Barajas himself. He created the support house, a small two-story apartment covered in military posters, hung U.S. flags, beds that resemble military bunks and a table covered with photos and articles that resembles a military recruiting station. He spends most of his day helping figure out their plan to return to the United States legally.
And sometimes his help also means emotional therapy, helping them look for work, or getting them cleaned up, keeping them busy — he’s got it all figured out. He said the hardest part of being in Tijuana is being separated from his daughter, who he dreams of being reunited with everyday. He tries to Skype with her every night. “She’s the love of my life, and she’s the one who gets me through those bad days,” he said tearing up. “There were times when I would take her to the border and she would cry like, ‘Why can’t you just come home with me?'”
He understands the struggles that veterans face when they’re displaced from their lives in the United States and sent back to Mexico. Like Barajas, most of the veterans joined the army with a green card — not as U.S. citizens — and were deported, some for minor offenses such as possessing marijuana or collecting too many traffic tickets. Some, for more serious crimes.
READ: What happened to Trump’s donations to veterans?
Barajas said a lot of the run-ins between veterans and law enforcement are the result of untreated post-traumatic stress disorder. This is because these veterans never received the health care they qualify for if they lived in, or could even visit, the United States. 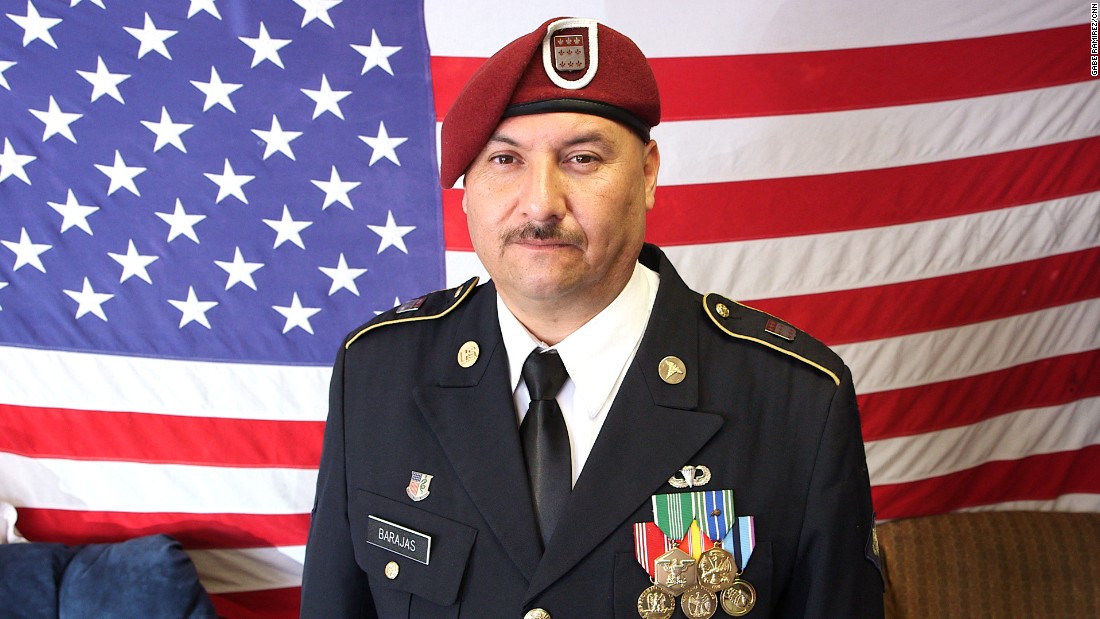 In an email to CNN, a spokesperson for the Department of Veterans Affairs wrote, “Generally, the act of being deported would not result in a loss of service-connected disability compensation.”
Barajas is not giving up. He says he will fight until he’s helped all the deported veterans return “home.” He works every day on making calls to immigration lawyers, giving interviews to the media, and strategizing for the next project to call attention to his cause.
The community of banished veterans at the Bunker, see Barajas as their leader. One regular, Jesus “Chuy” Juarez Castillo grew up in San Diego and was a U.S. Marine. In 1974, working as combat engineer at Camp Garcia in Puerto Rico, he fell off the back of truck that was moving his platoon up the side of a mountain. He says he was in a coma for weeks and after months of recovery from his head injury, he returned to San Diego on emergency leave after his father died suddenly. That’s when he says his life fell apart. He lashed out. He was arrested several times and kicked out of the Marines. He served time in jail, for drug convictions. He lost his green card and was deported. Because of his discharge he lost his benefits and has never seen a specialist. He has no diagnoses for traumatic brain injury.
READ: 307,000 veterans may have died awaiting Veterans Affairs health care, report says
While hanging out at “The Bunker,” Castillo walked up to Barajas’ desk, while he typed away on his desktop computer. “That’s our angel,” he said casually, pointing to Barajas. “Right there. El comandante.” Barajas laughed in response.
Barajas has been making progress. He’s enlisted the aid of the ACLU.
Jennie Pasquarella, the director of immigrants’ rights for the ACLU of California, said deported veterans are a prime example of the need for immigration reform. “I think that it’s a really tragic example of how broken our immigration system is that people who not only were legal residents here, who lived their entire lives here — most of them came when they were very small children,” Pasquarella told CNN. “Many of them went to war and fought on behalf of the United States. They come home and not only do they have all the problems that veterans have when they reenter society, all the trauma, but now you have them being basically being pushed out of the United States.”
She said it’s unclear how many veterans the U.S. government has deported, but they have connected with 70 veterans since they took on the cause over a year ago. “They’re scattered all over the world,” Pasquarella said. “We have no real way of knowing (how many there are). There isn’t any tracking. There isn’t any effort from the United States (government).”
READ: Veterans’ groups fire back at Clinton’s VA comments
Last week, one banished veteran became the first of the group to earn his citizenship. Daniel Torres was the only veteran at “The Bunker” who self-deported and has a clean record, which is likely why he was able to get his citizenship so quickly, Pasquarella said. She represented him in his case under the ACLU. “It definitely made it easier,” she said.
Torres served four years in the U.S. Marine Corps including a deployment to Iraq. When returned to the United States, he wasn’t sure what to do with his life. He was an infantryman. He loved the Corps and he was good at it, so he volunteered to deploy to Afghanistan. But his life turned upside down when he lost his military ID and tried to get a new one. His green card had expired after he had turned 18 years old. Unable to prove his citizenship and over the objections of his commanders, he was separated from the Marines. He tried to join the French Foreign Legion but was disqualified because of hearing loss he suffered in the Corps. So he packed his bags in France and unable to re-enter the U.S. he returned to Tijuana, where he had extended family. Today, he’s a citizen and has reunited with his parents, who are living in California.
And there’s hope for the others. Arizona Rep. Ruben Gallego introduced a bill to Congress on April 20 that would help deported veterans reunite with their families in the United States and prevent the removal of service members from the country in the future. It urges the secretary of the Department of Homeland Security to re-admit veterans who have not committed serious crimes to return to the United States, and limits the deportability of a service member if they’ve served in the military for at least 6 months and also has not committed a serious crime.
READ: Veterans Day Fast Facts
Barajas is positive about the bill, however, he doesn’t think it will help all of his veterans in Tijuana if it’s passed. He firmly believes that even if a veteran committed a serious crime, they should be treated like any other American.
“Some of the men do have aggravated felonies,” he said. “We have to continue to work on getting them home.” He believes their service has earned them a chance to redeem themselves in the United States.