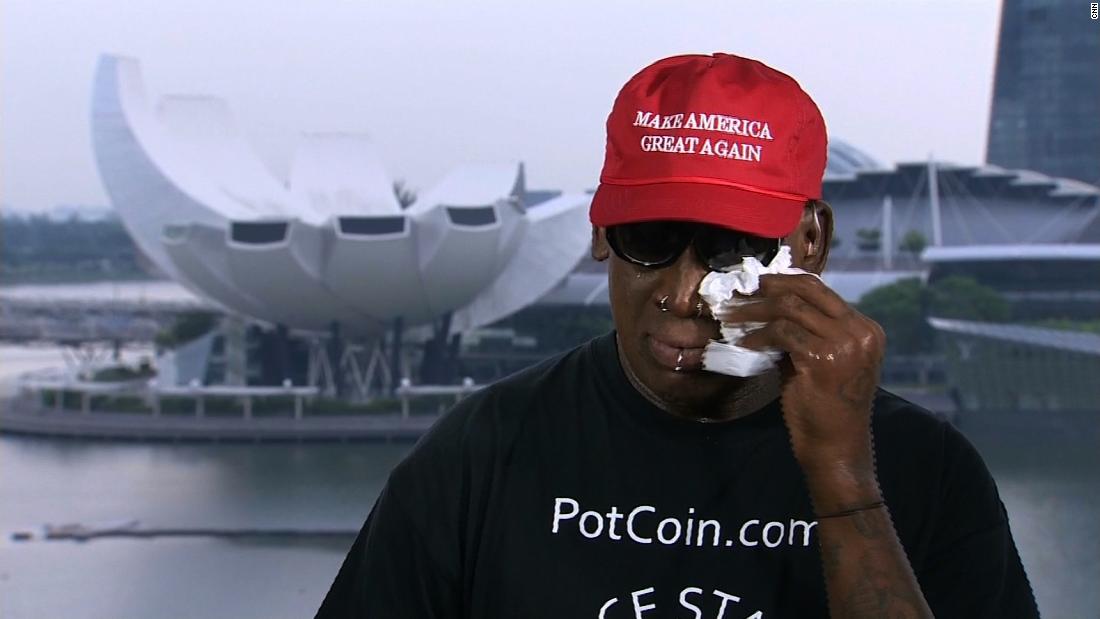 (CNN)It’s been described as the biggest diplomatic breakthrough of the 21st century, but to former basketball star Dennis Rodman, Tuesday’s meeting between North Korean leader Kim Jong Un and US President Donald Trump was a beautiful moment between two good friends.

Wearing a red “Make America Great Again” baseball cap, the former NBA Hall-of-Famer said that Tuesday’s historic meeting was years in the making.
“It’s a great day. I am here to see it. I’m so happy,” he said.
Rodman, who has previously boasted of his role in bringing the two leaders together, described how he always believed in helping North Korea.
“Once I got familiar with the culture and situation, I felt like I was at home,” he said of his previous trips to the reclusive country, initially as part of a basketball delegation. 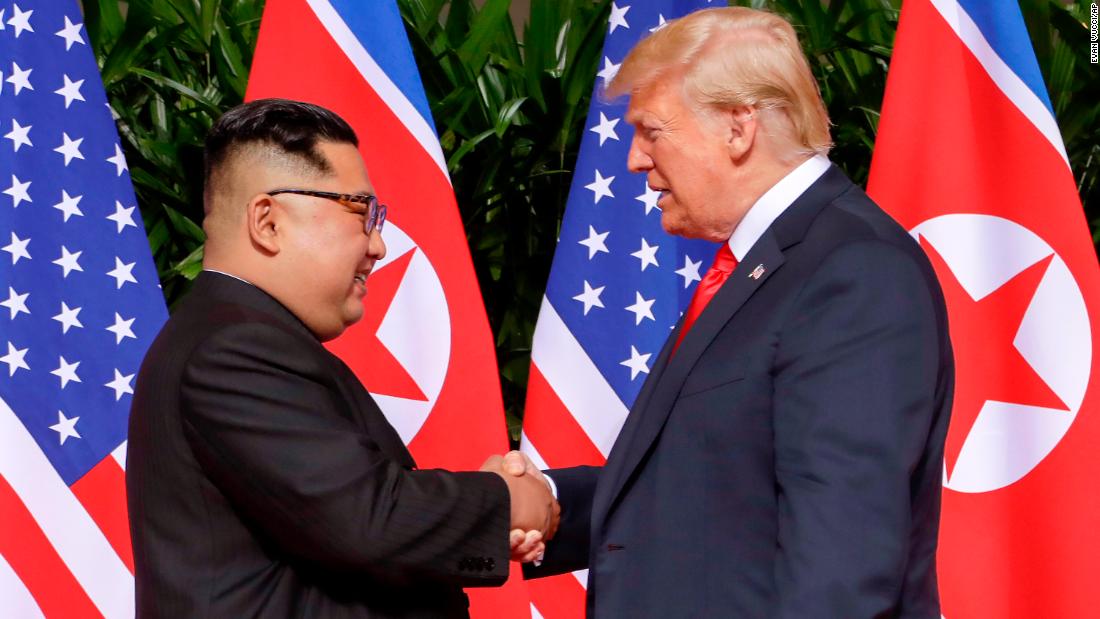 “I’m not in this for no money. I never started it for no money. This is not about Dennis Rodman being the greatest person in the world, bringing the countries together,” said Rodman, whose trip to Singapore is being funded by Potcoin, a Marijuana cryptocurrency.
“I think the fact that Trump would understand that the people of North Korea have a heart, they have soul, charisma, and they love each other,” added Rodman.
Describing Kim Jong Un as a “good friend,” Rodman said he didn’t want to think about the politics of the situation.
“I don’t want to see that, I want to see it go away… I want to see us get along. Have a handshake, have a smile, have a glass of iced tea. I don’t need to worry about the war stuff, I don’t know anything about that,” he said.
“Everything else should be in Donald Trump’s hands and people in the White House’s hands. I’m out of it. I’m so happy just to be here, man, and see everyone in the world get emotional like I did. Donald Trump should take a lot of credit because he went out of the box and made this happen.”
Rodman, who repeatedly praised Trump’s willingness to engage with North Korea, said he was previously threatened for defending North Korea.
“When I got home (from North Korea in 2014), I got so many death threats. I was sitting up protecting everything,” said Rodman. “But I kept my head up high, brother. I knew things were gonna change. I was the only one.”
The former Chicago Bulls star said he tried talking to former US President Barack Obama. “And Obama did not give me the time of day,” he said. 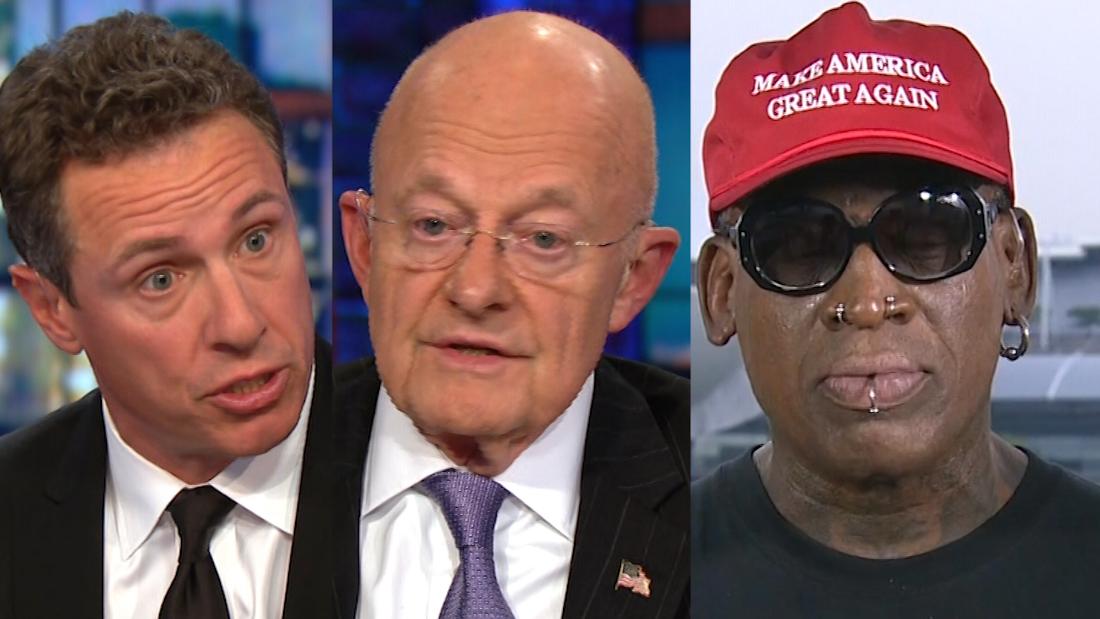 Clapper: I’ve long been an advocate for Rodman

Rodman is perhaps the only person in the world who has personal relationships with both the US President — he participated on Trump’s pre-presidency reality TV show, “The Celebrity Apprentice” — and North Korean leader Kim Jong Un.
Asked whether the White House had been in contact, Rodman said Trump’s secretary had called him to say “Donald Trump is so proud of you, he says thank you.”
If what Rodman says is true, it represents a marked turnaround from 2014, when Trump, who had yet to be elected president, described Rodman as “either drunk or on drugs (delusional)” in response to the basketball star’s suggestion the two might travel to North Korea together.
“Crazy Dennis Rodman is saying I wanted to go to North Korea with him. Never discussed, no interest, last place on Earth I want to go to,” tweeted Trump.
Discussing his relationship with Kim, Rodman said the North Korea dictator was “more like a big kid” who “loves to have a good time.”
“He was taking selfies and all that,” said Rodman of his various meetings with Kim. “This guy wants to be around the world, he wants to go to America.”
Rodman, who expects Tuesday’s summit to be a success, said the outcome would be dependent on the ability of the two leaders to strike up a personal relationship.
“If Kim Jong Un and Donald Trump understand and have a smooth comfortable relationship, smile, laugh, joke … It ain’t gotta be war. It’s gotta be something, everyone, is comfortable with.”
Rodman said Kim, who was educated in Switzerland, “understands bits and pieces” of English.
“I think people understand that Kim Jong Un is not a dumb man,” said Rodman. “He’s trying to protect his people, his honor, and everything that has to do with his country.”
“Let’s just hope for the best. We don’t need a miracle, we just need the doors to be open so we can start freshand make this place a better world, baby, that’s it.”