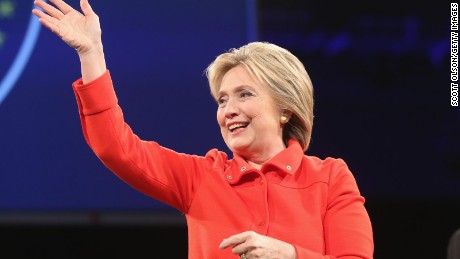 Des Moines, Iowa (CNN)Bernie Sanders ratcheted up his fire against Hillary Clinton on Saturday night here in Iowa, departing from his normal stump speech to draw repeated contrasts with the former secretary of state.

Clinton did not return fire, delivering her standard stump speech at the Jefferson-Jackson Dinner and choosing instead to train her focus on Republicans, not her fellow Democrats.

Sanders implied that Clinton took poll-tested positions based on political expedience as he used the milestone event in the Iowa Democratic caucus race to paint himself as a more authentic and faithful fighter for liberal values.

He jabbed Clinton on her Senate vote to authorize the Iraq War in 2002 and her recently declared opposition to a vast pan-Pacific trade pact she championed as secretary of state, drawing deafening cheers from thousands of his supporters.

“I promise you tonight as your president, I will govern based on principle. not poll numbers,” Sanders said, 100 days before the first-in-the-nation caucuses.

“I pledge to you that every day I will fight for the public interest, not the corporate interests. I will not abandon any segment of American society — whether you’re gay or black or Latino or poor or working class — just because it is politically expedient at a given time,” he said.

Clinton, on the contrary, subtly framed Sanders as someone more comfortable yelling and complaining than getting things done.

“I am running as a proud Democrat,” Clinton proclaimed, a subtle knock against Sanders’ independent status.

Clinton stuck to her usual script, delivering a speech aimed at a general election audience, breaking only at a few moments.

One way she broke: She turned the Obama love up to 11.

Later in the speech, Clinton said, “It’s not enough to just rail against Republicans and billionaires, we have to win this election.” The comment, a new line for the former first lady, was directed at Sanders’ electability, something Democrats openly worry about.

Clinton has been willing to take on Sanders in other venues, but she never does it by using his name. On Saturday, she hit Sanders on gun control, an issue where the Vermont senator is notably more conservative than many in the Democratic Party.

“I have been told to stop shouting about gun violence,” Clinton said, a reference to a comment Sanders made during the first Democratic debate earlier this month. “Well, I haven’t been shouting, but sometimes when a woman speaks, some people think it is shouting. … I won’t be silenced and I hope (the issue) won’t be, either.”

On the whole, however, Sanders was the far more aggressive candidate on Saturday night.

Sanders said he was the best Democrat to build a countrywide coalition because he could operate in small groups or before large crowds — a reference to the big events he has held in the campaign in sports stadiums that have dwarfed Clinton’s gatherings.

Without mentioning Clinton by name, Sanders drew sharp contrasts with the former first lady that were not lost on any of the Democrats in the crowd.

He implicitly used Clinton’s Senate vote on Iraq to stir new worries about her hawkishness that helped dent her 2008 campaign for president.

“It gives me no joy to tell you that much of what I predicted about Iraq turned out to be right,” Sanders said. “That was a tough vote. I came to that fork in the road, and I took the right road even if if was not popular at that time.”

He also appeared to take aim at Clinton on same-sex marriage after she said on MSNBC on Friday that the Defense of Marriage Act, which defined marriage as between a man and a woman and passed during her husband’s administration was in fact an attempt to establish a bulwark against conservatives who wanted to roll back gay rights.

“Today, some are trying to rewrite history by saying they voted for one anti-gay law to stop something worse. That’s not the case,” Sanders said, half an hour or so before Clinton was due to give her own speech.

Sanders then hammered Clinton’s delay in coming out against the proposed Keystone XL Pipeline designed to bring oil from Canada to the Gulf of Mexico that environmentalists say will worsen climate change.

“If you agree with me about the urgent need to address climate change, then you would know immediately what to do about the Keystone pipeline. It was not a complicated issue,” Sanders said.

On the Trans-Pacific Partnership, Sanders said the deal had never been the “gold standard” of trade pacts, as Clinton had predicted when she ran President Barack Obama’s State Department.

To some Democrats in the room, the harder-edged Sanders was a direct response to the fact Clinton has had a strong October, culminating in her poised appearance at the 11-hour hearing on Benghazi earlier this week.

Sanders rejected that idea after the event.

“What a campaign is about is contrast. That it is what it is about,” he told CNN. “I don’t want negative ads and I don’t believe in negative campaigning, but what is the sense in being in a campaign if you don’t differentiate your difference with your opponents?”