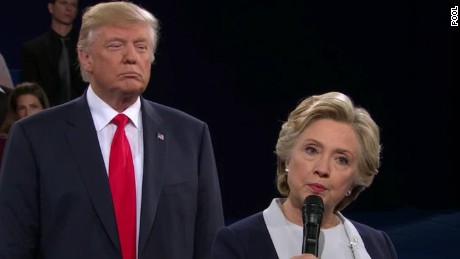 (CNN)For Sunday night’s second presidential debate in St. Louis, Donald Trump and Hillary Clinton faced questions presented in the town hall format. As a reminder, I don’t give my debate coach grade on a curve, expectations, or improvements: I examine this debate by itself.

There are four categories important for a successful town hall debate: interaction with questioners, personality/warmth/humor/nonverbal communication, substance, and persuasiveness.

This category goes to Hillary Clinton. She approached each of the audience members as they asked their question, and she talked to them as if she were in their living room. 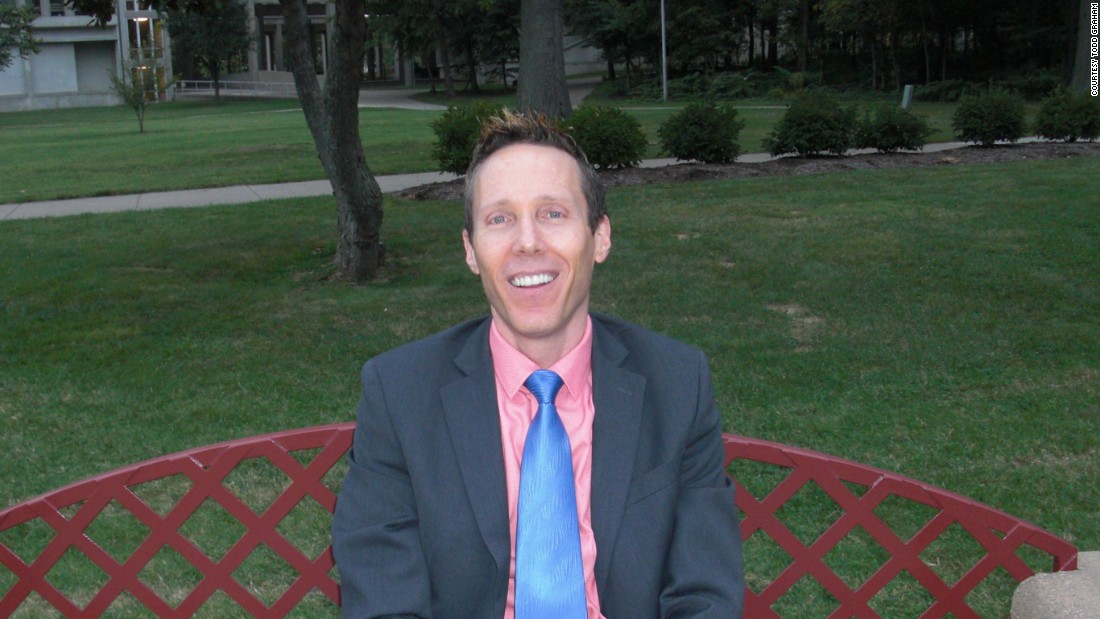 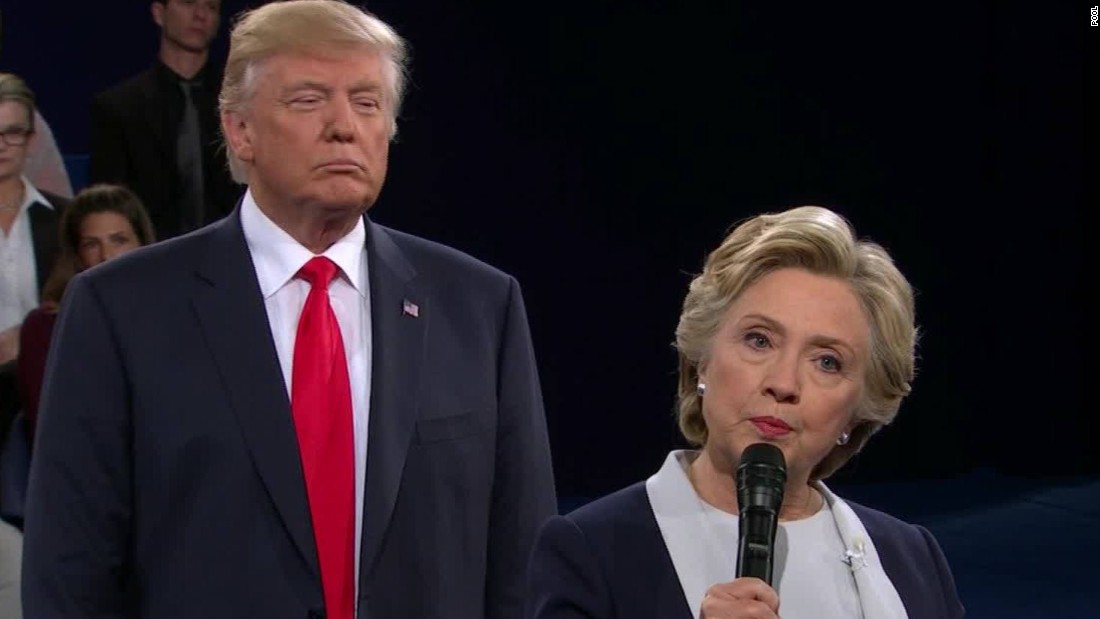 And while he interrupted less, it was still annoying when he did it (to everyone except his equally annoying, loud supporters in the audience). He frowned, he rocked back and forth, he paced, wandered, etc. If he’d have just sat on the chair when it wasn’t his turn, he’d have fixed most of this. Plus, again, he didn’t practice with a microphone. He complained about the mic after the first debate, but the main problem was his loud inhaling, a behavior he repeated once again.
I’ve known coke fiends who inhale with less fervor than Trump. Again, it could have been solved with practice.
Finally, the whiny complaints are just too much. It’s not appealing to hear presidential candidates complain about their time (Ben Carson, I’m talking about you), and Trump’s insistence that the moderators were out to get him was silly. (And disproven by the total speaking time).
Examples: “She went 25 seconds overtime,” and “One on three,” and “why don’t you interrupt her?”. My teams know that an audience will turn on you if you complain about the moderators. Trump should have learned that by now. Independent and undecided voters simply don’t care.
Clinton: B+
Trump: C-

My criticism of Clinton in substance is that Trump would shift the topic so often and so quickly that he’d have two or three random attacks for her on each topic that she left unanswered. She told us what he was saying was not true, and that we should fact check, but when he’s throwing the kitchen sink at her, it would have been nice if she had had a short, 10 or 15 second, rejoinder at the ready for each attack.
For example, she didn’t answer his erroneous charge that she’d started the racist birtherism that he had long trumpeted. Trump’s debate strategy may have been to throw a bunch of stuff against the wall to see what would stick, and even though she might have gotten bogged down in fielding all the wild accusations, I would have liked her to try harder to answer some of them.
Finally, on the issue of the WikiLeaks revelations about her Wall Street speeches, Clinton’s answer — in which she likened her approach to negotiating to Abraham Lincoln’s — was mocked by Trump… and she didn’t respond.
The two had stark differences in content. Substance is also determined by how well one answers the questions.
The Syria issue offered a perfect example of the differences. Asked twice what he would do about Syria, Trump avoided the question. The only news we got was when he contradicted his own vice presidential pick, Mike Pence. In college, debate teams are two people, and you’ve got to defend your partner. Well, Trump’s partner is his vice presidential nominee, Mike Pence. And on the topic of using American forces in Syria, Trump said, “He and I haven’t spoken and I disagree.”
Whereas his answer was avoidance and contradicting Pence, Clinton said the US should have a no-fly zone, perhaps arm the Kurds, and target ISIS leader Abu Bakr al-Baghdadi.
Trump handled the leaked tape of his sexual remarks by quickly apologizing and changing the topic. For many, this probably didn’t seem contrite enough, especially considering the severity of his language in the tape. Anderson Cooper was on-point. “You bragged that you sexually assaulted women. Do you understand that?” Trump clearly didn’t, saying, “No, I didn’t say that at all. I don’t think you understood what was said.” Yes, Mr. Trump. He did.
Another thing I want to point out: Trump was questioned by a Muslim audience member about how he would help Muslims with consequences of being labeled as a threat to the country. Trump answered, “You’re right about Islamophobia and that’s a shame.” But in his next breath he espoused Islamophobia, asserting with no evidence that in San Bernardino, “Many people saw the bombs all over the apartment” (an assertion fact-checkers deemed untrue). So he was both lying, and promoting Islamophobia. This inconsistency was lost on no one and would not fly before a debate judge.
And there was also scary substance when, in a discussion of Clinton’s deleted emails, Trump told her that if he were elected he’d appoint a special prosecutor and “you’d be in jail.” The FBI has already cleared Clinton, but he was bizarrely threatening his opponent in an election. This is Putinesque, and again, made no sense — besides being a frightening threat from a candidate for president of a democracy.
Clinton: B-
Trump: F
* If he could have been more honest, even with all his problems, I was prepared to give him a higher grade. However, post-debate, four fact-checking sites had him telling far more falsehoods than Clinton. You can’t lie this much and win a debate. The goal of debate is truth-seeking. We’ve got to grade more stringently against falsehoods.

They both made strong cases on many statements. So what set them apart? Trump’s hyperbole. I teach my debaters that exaggerations are almost as bad as lies when it comes to persuasion. They have a cumulative effect. After so many times exaggerating, your audience is much less likely to believe you at all.
Trump used the word “disaster” for education, inner cities, Syria, and Obamacare, and asserted that “everything is broken” about Obamacare. And for immigration, he said “nobody has ever seen numbers like this” and predicted that immigrants “are going to cause crime like we’ve never seen.” He also said Clinton’s plan to increase the number of Syrian refugees in the US would be the “great Trojan Horse of all time,” called NAFTA “the greatest disaster trade deal in the history of the world,” and my favorite, “nobody has more respect for women than I do.”
Enough already.
Clinton: B
Trump: C
Overall grade for the debate:
Clinton: B
Trump: D+