I spoke up for safety at an Amazon warehouse. Unfortunately I believe it cost me my job 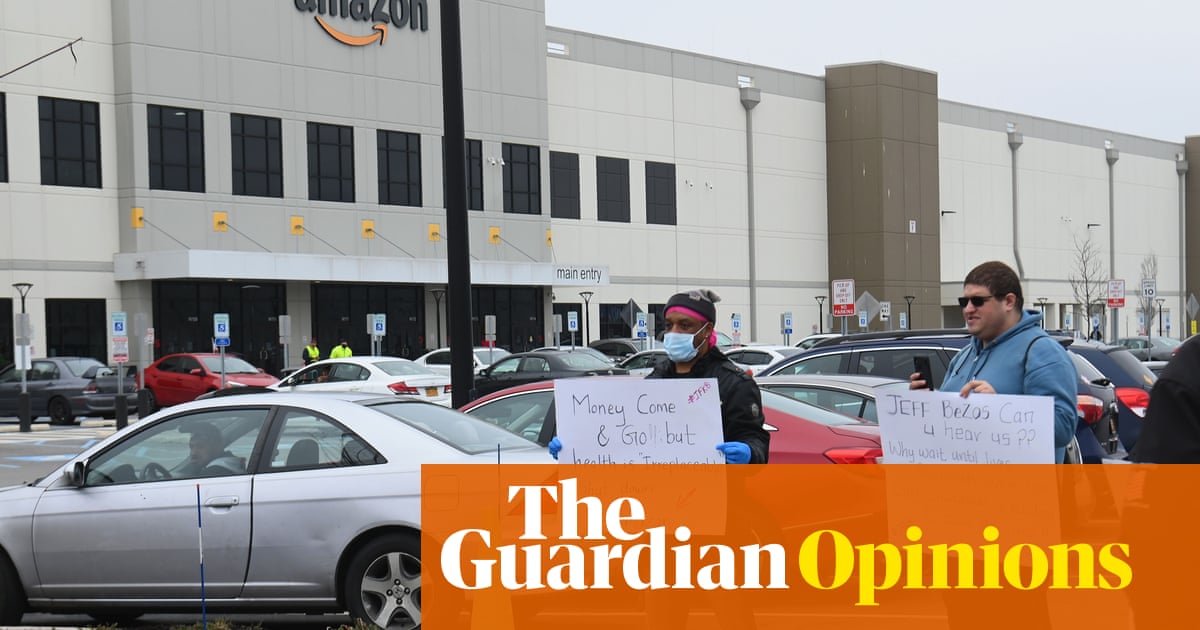 When I applied to work at Amazon, the job description was simple. It said you need to have a high-school diploma or a GED (general educational development) and you have to be able to lift 50lbs. That’s it. Now, because of Covid-19, we’re being told that Amazon workers are “the new Red Cross”. But we don’t want to be heroes. We are regular people. I don’t have a medical degree. I wasn’t trained to be a first responder. We shouldn’t be asked to risk our lives to come into work. But we are. And someone has to be held accountable for that, and that person is you.

I have worked at Amazon for five years. Until I was fired last week from the Staten Island warehouse in New York City, I was a manager assistant who supervised a team of about 60-100 “pickers”, who pick items off the shelves and put them on conveyer belts to get sent out for shipment.

At the beginning of March, before the first confirmed case of coronavirus at the facility, I noticed people were getting sick. People had different symptoms: fatigue, light-headedness, vomiting. I told HR. I said: hey, something’s wrong here. We need to quarantine the building. I wanted us to be proactive not reactive. Management disagreed and assured me they were “following CDC guidelines”.

The lack of protections worried me. Inside the warehouse, there are gloves, but they are not the right kind. They are rubber instead of latex. There are also no masks. Hand sanitizer is scarce. There are limited cleaning supplies. People are walking around with their own personal hand sanitizer, but good luck finding one in a local grocery store.

Because of those conditions, I didn’t feel safe, so I took paid time off to stay home and avoid getting sick. Eventually, though, I ran out of paid time off and I had to go back to work. Other colleagues don’t have that option. Many of my co-workers and friends at the Amazon facility have underlying health conditions. Some have asthma or lupus or diabetes. Others are older people, or pregnant. They haven’t gone to work in a month, so they haven’t been paid. They’re only doing that to save their lives: if they get the virus they could be dead. One of my friends, who has lupus, is living with his relatives so he doesn’t have to pay rent. Can you imagine if he couldn’t do that? He’d probably be homeless.

Another problem is that Amazon has imposed mandatory overtime to keep up with the demand of everyone ordering online. The result is that Amazon employees are going to work sick as dogs just so they can earn $2 per hour on top of their regular pay. Do you know what I call that? Blood money.

Workers who want to make extra money are doing up to 60 hours of work a week and risking their lives. Some are working even if they are sick. When people are coughing and sneezing they say, oh, it’s just allergies. It’s a scary time to be in the warehouse right now.

When I went back to work last Tuesday morning, I spoke to a team member who looked really ill. She told me she feared she had corona and had tried to get tested. I told her to go home and get some rest. Then, two hours later, we had a managers’ meeting. That’s when we were told we had a first confirmed sick employee. The crazy thing was, management told us not to tell the associates. They were being very secretive about it.

I thought the secrecy was wrong, so as soon as I left the meeting I told as many people as I could about the situation. Shortly after that, I started emailing the New York state health department, the governor, the CDC. I called the local police department. I did everything I could to close that warehouse down so that it could be properly sanitized but the government is too overwhelmed to act right now. That’s when I realized I would have to do something myself.

I decided to start spreading awareness among the workers in the building. I had meetings in the common areas and dozens of workers joined us to talk about their concerns. People were afraid. We went to the general manager’s office to demand that the building be closed down so it could be sanitized. We also said we wanted to be paid during the duration of that time. Another demand of ours was that people who can’t go to work because of underlying health conditions be paid. Why do they have to risk catching the virus to put food on the table? This company makes trillions of dollars. Still, our demands and concerns are falling on deaf ears. It’s crazy. They don’t care if we fall sick. Amazon thinks we are expendable.

Because Amazon was so unresponsive, I and other employees who felt the same way decided to stage a walkout and alert the media to what’s going on. On Tuesday, about 50-60 workers joined us in our walkout. A number of them spoke to the press. It was beautiful, but unfortunately I believe it cost me my job.

On Saturday, a few days before the walkout, Amazon told me they wanted to put me on “medical quarantine” because I had interacted with someone who was sick. It made no sense because they weren’t putting other people on quarantine. I believe they targeted me because the spotlight is on me. The thing is, it won’t work.I am getting calls from Amazon workers across the country and they all want to stage walk-outs, too. We are starting a revolution and people around the country support us.

If you’re an Amazon customer, here’s how you can practice real social distancing: stop clicking the “Buy now” button. Go to the grocery store instead. You might be saving some lives.

And to Mr Bezos, my message is simple. I don’t give a damn about your power. You think you’re powerful? We’re the ones that have the power. Without us working, what are you going to do? You’ll have no money. We have the power. We make money for you. Never forget that.