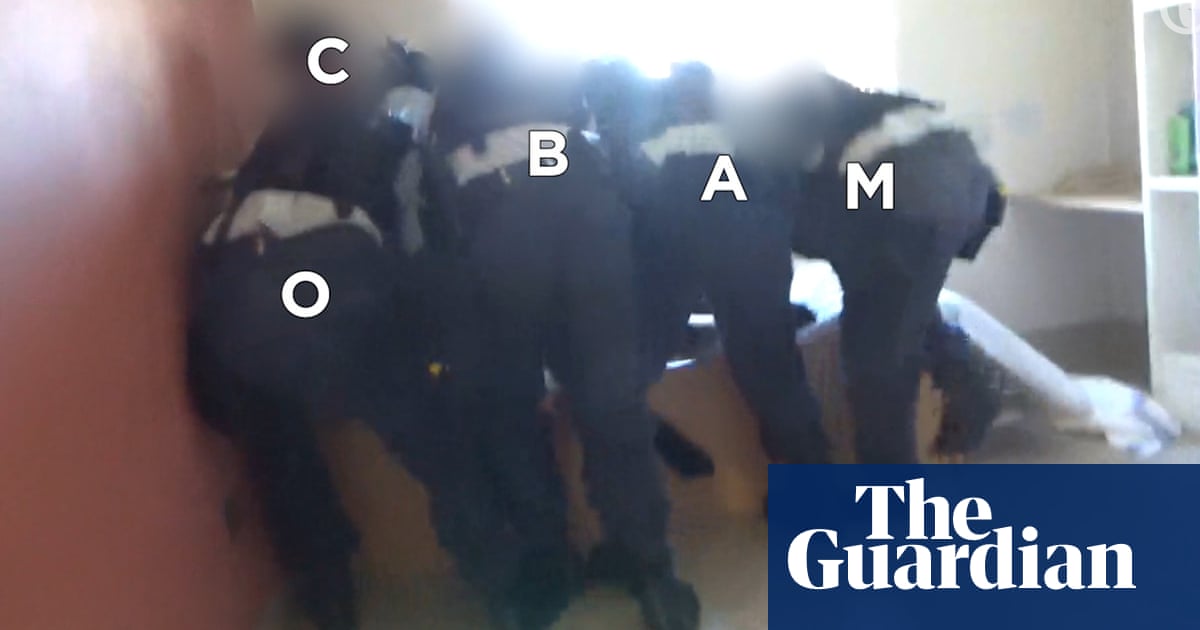 A shocking video of the death in custody of a prison inmate has been played to a New South Wales coroner’s court, depicting five officers restraining a man who said 12 times that he could not breathe before dying.

The court also heard a suggestion that attempts by health staff to resuscitate him were “lost by the inadequate and interrupted care he received”, which was so ineffective that any chance of survival was lost.

The inquest into the death of David Dungay Jr, a 26-year-old Indigenous Dunghutti man, viewed the graphic footage of the eight-minute ordeal, which began with officers from an immediate action team (IAT) at Sydney’s Long Bay jail rushing Dungay’s cell and restraining him face-down on the bed.

He was transferred to another cell where he was restrained again, injected with a powerful sedative, Midazolam, and a few minutes later stopped breathing.

The video was played to the court until the moment Dungay became non-responsive.

The court will hear from a number of witnesses including expert testimony from an emergency physician, Prof Anthony Brown, who will testify on his finding that a failure by staff to adequately administer first aid removed any chance of survival for Dungay.

In his opening address, counsel assisting Jason Downing, said Brown would give evidence that while the initial attempts at resuscitation by officers were appropriate, and medical treatment of the “highest standard”, those of the Justice Health staff were “incompatible with survival”.

“[Brown] was highly critical of the failure to provide continuous external cardiac massage and he stated there was no effective or consistent ventilation given to Mr Dungay for the majority of the period between the onset of cardiorespiratory arrest and the arrival of the NSW ambulance team,” Downing said.

Combined with other failings, this “lack of provision of continuous basic life support” meant the attempts at resuscitation were “effectively without value”.

Downing noted that it was “unclear” whether Dungay would have survived even if Justice Health officers had provided adequate life support, but Brown’s evidence suggested that “whatever chance Mr Dungay had was lost by the inadequate and interrupted care he received from Justice Health”.

The attempts at care were filmed but that portion of footage was not shown to the court on Monday. The eight minutes preceding Dungay’s death was shown, prompting members of his family to leave the room.

The footage shows five officers rushing and physically restraining Dungay in his cell, 71, sitting on him and then moving him to the floor. He is handcuffed and walked to cell 77. Officers warn him not to spit.

Throughout the incident Dungay shouts that he cannot breathe and begs to be let go. He shrieks and cries.

In cell 77 his pants are pulled down and a nurse injects him with Midazolam. He cries and yells: “I can’t breathe.”

A guard responds: “If you’re talking, you can breathe.”

Dungay is quiet and a guard tells him they are going to leave him there for the night. It is silent, then an officer shouts “Dungay, Dungay” before the video stops.

After counsel assisting finished his opening statement, the commissioner of corrective services told the court, via a statement through his lawyer, that a number of policy and procedural changes had been made because of Dungay’s death.

They included a new “use of force policy”, designed to detail the warning signs of positional asphyxia, including an inmate saying they could not breathe.

“It is a misconception that a restrained person who can talk must be able to breathe,” he said.

The face-down manner in which Dungay was restrained will be a key part of evidence.

Evidence emerged that five of the six IAT officers were untrained in the risks of positional asphyxiation. A detective sergeant tasked with investigating the death criticised himself and fellow investigating officers for not asking the IAT members about their training.

“The position was something that I was aware of through my training as being a dangerous position to put someone in,” he said.

“I myself wouldn’t want to keep someone in that position longer than I had to … once you had that person under the level of control that was needed.”

He said in his 16-year career of policing he couldn’t remember ever not knowing that it was dangerous.

Downing also flagged disputed accounts of what happened, including a nurse and officers each saying the other had been the first to raise concern that Dungay might adversely affect his blood sugar levels by eating the biscuits – which led to the cell raid.

That nurse also said a treating doctor had agreed Dungay should be given a shot of Midazolam. That doctor denies ordering the Midazolam “or indeed any other medication”, Downing said.

The court heard of David’s severe mental health issues, including medical reports which noted he suffered auditory and visual hallucinations, and was treated with antipsychotic medication.

It also heard of his long struggle to manage his diabetes. There were several incidents and reports from his periods of incarceration that contained concerns he was self-harming by “deliberately mismanaging” his condition, and that he could be non-compliant with medication.

On the day of his death Dungay had high blood sugar levels but was asymptomatic, and his history suggested it was low blood sugar that led to medical episodes. The legal representative of the Dungay family raised questions such as why the guards needed to use such force to stop him eating biscuits. “Why couldn’t they just do nothing?”

A food addiction has defined my entire life. And it is slowly killing me | Melanie Tait