Ever wondered how the prime minister sleeps at night? Now we have the answer: blissful ignorance 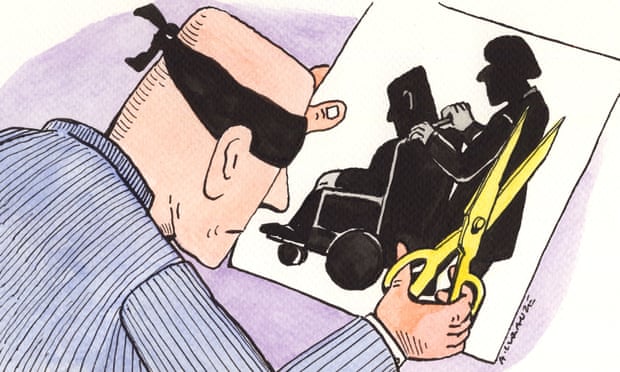 Its like the crucial moment in Graham Greenes novel The Quiet American. The US agent stares at the blood on his shoes, unable to attain the connection between the explosion he commissioned and the bodies scattered across the public square in Saigon. In leaked correspondence with the Conservative leader of Oxfordshire county council( which covers his own constituency ), David Cameron conveys his horror at the cuts being made to local services. This is the point at which you realise that he has no conception of what he has done.

The letters were sent in September, but came to light only on Friday, when they were revealed by the Oxford Mail. The national media has been remarkably slow to pick the story up, given the insight it offers into the “ministers ” detachment from the results of his actions.

Cameron complains that he is disappointed by the councils proposals to attain significant cuts to frontline services from elderly day centres, to libraries, to museums. This is in addition to the unwelcome and counter-productive proposals to close childrens centres across the county. Why, he asks, has Oxfordshire not focused instead on building back-office savings? Why hasnt it sold off its surplus property? After all, there has been only a slight fall in government grants in cash terms. Couldnt the county generate savings in a more creative way?

Explaining the issue gently, as if to a slow learner, members of the council leader, Ian Hudspeth, points out that the council has already culled its back-office functions, slashing 40% of its most senior staff and 2,800 employment opportunities in total, with research results that it now spends less on these roles than most other districts. He explains that he has already flogged all the property he can lay hands on, but would like to remind the prime minister that using the income from these sales to pay for the councils operating costs is neither legal , nor sustainable in the long-term since they are one-off receipts.

As for Camerons claim about government grants, Hudspeth comments: I cannot accept your description of a drop in funding of APS7 2m or 37% as a slight fall.

Again and again, he exposes the figures the prime minister use as wildly incorrect. For example, Cameron claims that the cumulative cuts in the county since 2010 amount to APS2 04 m. But that is not the cumulative figure; it is the annual figure. Since 2010, the county has had to save APS6 26 m. It has done so while taking on new responsibilities, and while the population of elderly people and the numbers of children in the social care system have boomed. Now there is nothing left to cut except frontline services.

Have you ever wondered how the prime minister sleeps at night? How can he live with himself after enforcing such gratuitous pain upon the people of this nation? Well now, it seems, you have your answer: he appears to be blissfully unaware of the impact of his own policies.

Camerons letter seems to confirm the warnings issued by the National Audit Office a year ago: that the government had only a limited understanding of the savings local authorities have to attain. It blithely assumed that councils could make their savings through restructuring, without detecting whether or not that was true. It failed to assess their budgets as a whole, overlooking, for example, the funding of libraries and youth services, about which Camerons letter complains. No wonder he hasnt the faintest notion what is going on.

Its worth remembering that Oxfordshire, which is run by Conservatives, is among the wealthiest districts in England, with the nations lowest level of unemployment. In common with all aspects of austerity, the cuts have fallen hardest on those less able to weather them: local authorities in the most deprived parts of the country.

As a report commissioned by the Joseph Rowntree Foundation detected, the cuts in some areas are so extreme that local authority provision is now being reduced to little more than social care, child protection and other core services, while the budgetary resources for libraries, museums, galleries, sports facilities, small parks and playgrounds, childrens centres, youth clubs, after-school and holiday clubs, planning and environmental quality have already been slashed to the point at which these can barely function.

In July, the Financial Hour revealed that the funding for childrens centres across England has been cut by 28% in merely three years: is Cameron unaware of this? As for public protection, it is all but gone. Visits to workplaces by health and safety inspectors have fallen by 91% in four years, and have been abandoned altogether by 53 local authorities. If you want to endanger your workers, dont mind us. You begin to see how the governments agendas mesh.

Now, as there is nothing else left to cut, the attack turns to social care, with untold outcomes for children, the elderly and people who have mental health problems.

And we are only halfway through the governments elective, unwarranted austerity programme. The spending review this month will demand even greater cuts from budgets that have already been comprehensively flensed. How will this be possible without dismantling the basic functions of the state?

Graham Greenes American agent, Alden Pyle, has an unused face and a wide campus gaze. Impervious to other peoples suffering, he can suppose merely in abstractions, and edits reality to make it fit the theories in which he has been schooled. Nothing he encounters can change his views, as it passes through this filter before it reaches his brain. When he saw a dead body he couldnt even insure the wounds. Oblivious to the results of his actions, he is impregnably armoured by his good intentions and his ignorance. Oh, hello, Prime Minister.

‘It never stops shaping you’: the legacy of child sexual abuse – and how to survive it

7 horrible things that have already happened because of the Brexit

The chicken shop mile and how Britain got fat