Fifty-five confirmed cases in state, including two in San Francisco with no history of travel 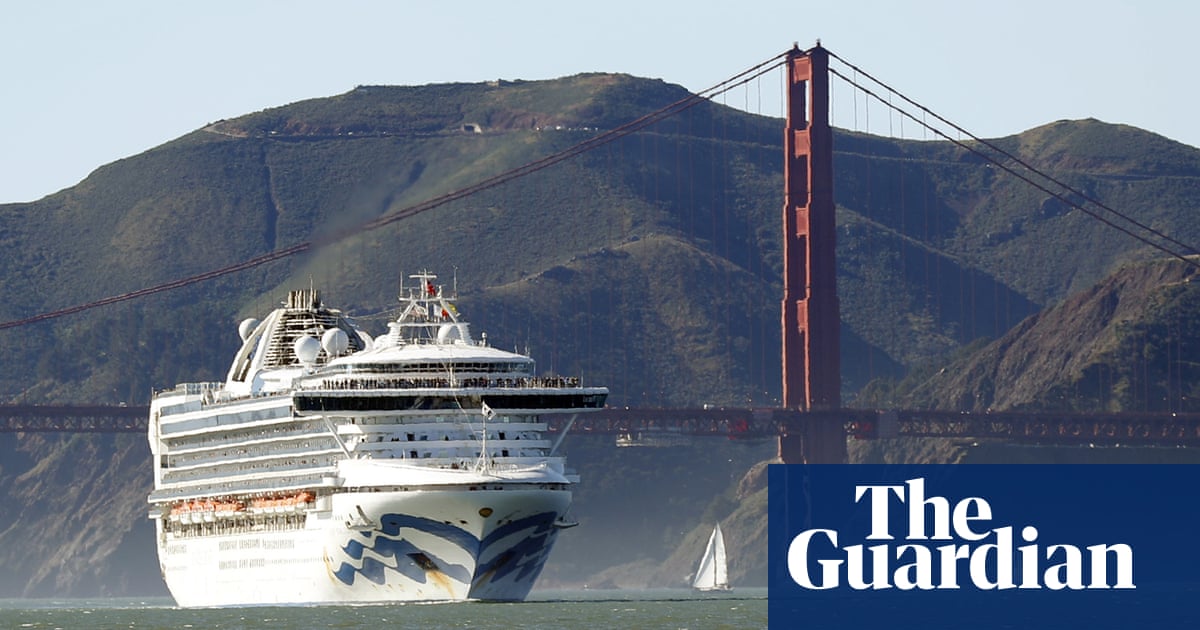 Passengers on a Grand Princess cruise ship linked to the first death from coronavirus in California remained off the coast on Thursday as the first two cases were confirmed in San Francisco.

A coast guard helicopter was delivering test kits to the cruise ship waiting to dock in the port of San Francisco before flying them back to a laboratory later in the day. While the ship has 2,422 passengers and 1,111 crew onboard, according to the cruise line, fewer than 100 have thus far been identified for testing.

“The ship will not come on shore until we appropriately assess the passengers,” said Gavin Newsom, California’s governor, in a news conference Wednesday.

The death of a 71-year-old man on Wednesday was the first US fatality reported outside of Washington state, bringing the total number to 11 and prompting the California governor to declare a state of emergency. The state is battling the virus on multiple fronts, with 55 confirmed cases.

The two cases in San Francisco – a man in his 90s with underlying health conditions who is in serious condition, and a woman in her 40s who is in fair condition – had no history of travel. One of the cases prompted a pre-emptive school closure, as the patient is a relative of a student at the school.

The man who died was one of three individuals who tested positive for coronavirus after traveling on a roundtrip Grand Princess cruise from San Francisco to Mexico last month.

After the ship docked in San Francisco on 21 February, thousands more passengers boarded and thousands disembarked. The vessel then began a roundtrip voyage to Hawaii.

Another previous passenger has also been hospitalized. The cruise line said that no cases of the virus had been confirmed among those still on the ship but that some passengers had experienced flu-like symptoms.

On the return leg of the Hawaii trip, 11 passengers and 10 crew members reported flu-like symptoms, Newsom said in a news conference. One additional crew member who had served on the Mexico trip was medically disembarked in Hawaii with flu-like symptoms and tested negative for coronavirus, according to San Francisco public health officials.

In addition to the 21 people reporting flu-like symptoms, officials planned to test the 62 passengers from the Mexico trip who remained on board for the Hawaii journey, as well as an unknown number of crew. Those guests were instructed by the cruise line to stay in their staterooms until they were cleared by medical personnel.

Keane Li, who said his parents were aboard the cruise ship, tweeted a video that his parents sent him of the helicopters delivering the test kits on Thursday morning.

Li’s parents declined to be interviewed but told Li that while there was no strict order to remain in their staterooms, passengers were instructed to maintain a distance of 6ft from each other. The buffet option was no longer available, and passengers were told to leave a seat between each diner at meals.

The helicopters that arrived in the morning were set to return in the evening to pick up the samples to bring to a laboratory for testing, Li said. Results would be available, at the earliest, on Friday morning, meaning the ship would remain off the coast until at least then.

The decision to hold the ship offshore came as federal health authorities announced an investigation of the Life Care nursing home in Kirkland to determine whether it followed guidelines for preventing infections.

At least 70 coronavirus cases have been reported in Washington state. Researchers say the virus may have been circulating in the Seattle area undetected for weeks.

On Thursday, US health officials said they expected a far lower death rate than the World Health Organization’s international estimate of 3.4% – a rate admittedly too high because it doesn’t account for mild cases that go undetected.

Brett Giroir, assistant US health secretary, instead cited a model that included mild cases to say the US could expect a death rate somewhere between 0.1% – like seasonal flu – and 1%.

The New York governor, Andrew Cuomo, confirmed the number of cases in the state had doubled to 22. “We are trying to contain as much as possible the spread of each case we find – but we expect more cases,” he said.

The risk is highest for older people and anyone with high-risk conditions such as heart or lung disease, diabetes or suppressed immune systems, such as from cancer treatments.

Meanwhile, public officials in Washington came under pressure to take more aggressive steps against the outbreak, including closing schools and canceling large events.

Many major Seattle-area businesses and some schools have begun acting on their own, including the the 22,000-student Northshore district north of Seattle, which announced it would close for up to two weeks as a precaution.

The US senate has passed an $8.3bn measure to help tackle the outbreak in hopes of reassuring a fearful public and accelerating the government’s response to the virus. The money would pay for a multifaceted attack and would more than triple the $2.5bn outlined by the White House 10 days ago.