The speaker of the city council, 37, who was diagnosed with HIV in 2004, has overcome addiction and is mulling a mayoral run 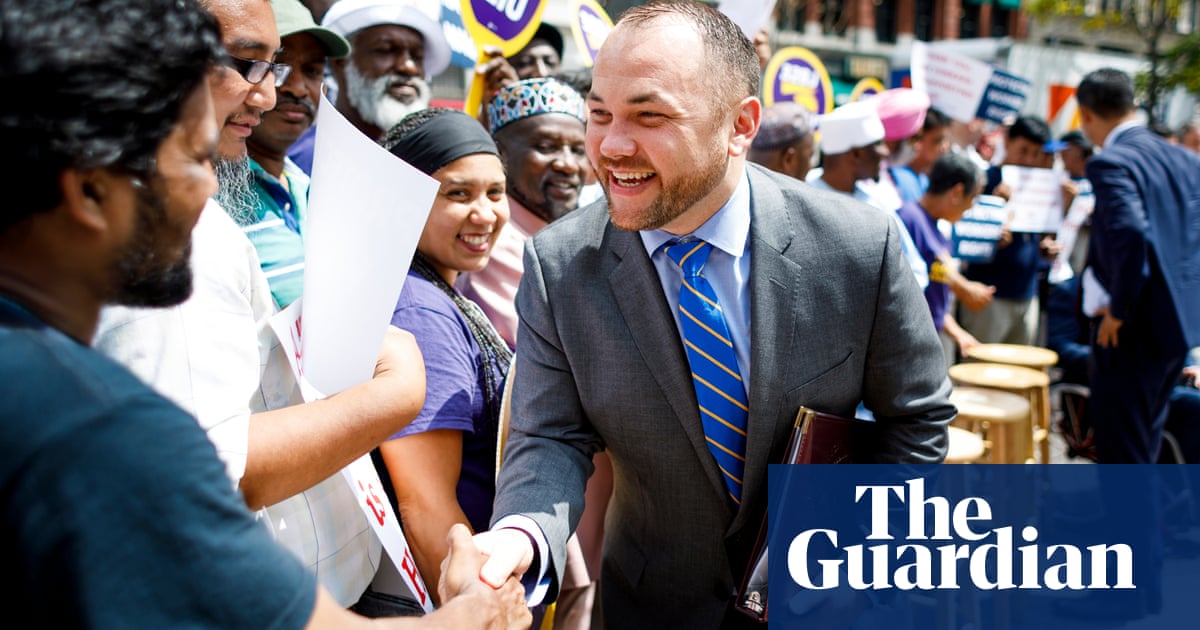 Corey Johnson got his first brush with fame when, as the captain of his high school football team in a small town in Massachusetts, he came out as gay.

These days, he likes to say he’s in a long-term relationship with New York City. It’s a way of confessing his love for his adopted city – where he was diagnosed with HIV, and where he overcame alcohol and drug addiction to become a high-profile speaker of the city council – but not just that.

“I mean that I can’t find a boyfriend!” Johnson told the Guardian. “Besides my mother, New York City is probably the most constant love I’ve had in my life.”

Johnson, 37, announced earlier this year that he is considering a run for mayor of New York, and started raising money – refusing donations over $250 and money from real estate developers.

It was a move that thrust Johnson into the spotlight as he vies for an office that both its current occupant and two direct predecessors – Bill de Blasio, Rudy Giuliani and Michael Bloomberg – have used as platforms to mull presidential ambitions. He would be the first openly gay mayor, a distinction former speaker Christine Quinn came close to claiming before her mayoral campaign collapsed.

Now as De Blasio sets his sights beyond the city as he considers a likely campaign for president in 2020, the New York politics magazine City & State posed the question on its cover: “Is Corey Johnson already mayor?”

He’s not, but Johnson gave an idea of what his blueprint for the city would look like with his first state of the city speech in March. He proposed an ambitious plan for the city to seize control of its crumbling subway and bus system, now run by the state, and overhaul its streets to give more space to pedestrians and cyclists and less to cars.

Johnson has played a central role in a series of high-profile issues – grilling Amazon on its ultimately scrapped plan for a new headquarters in Queens, pushing through new regulations on Uber and Airbnb, and sponsoring a law to allow New Yorkers to list a third gender on their birth certificates and a proposed ban on the sale of fur. But he opted to devote the speech entirely to the city’s transit crisis.

“Mass transit is the lifeblood of New York City,” he said in his city hall office, sipping water from a mason jar through a metal straw. “Our subways and buses are falling apart.”

Most New York politicians would say the same, but Johnson has found a simple way to set himself apart from other top officials – unlike the mayor or the governor, he actually takes the subway on a day-to-day basis.

Johnson’s tenure has not been without controversy. He has recently sparked criticism for punishing two council members – one who said the council is “controlled by the homosexual community” and one who said “Palestine does not exist” – by yanking their committee assignments. Critics called it an assault on free speech.

But the speaker, once perceived by some fellow politicians as aggressive and potentially vindictive, has mostly won over foes with an approach that emphasizes showing up everywhere and finding the fun in leading New York, which in De Blasio’s telling often sounds more like a slog.

He posts videos of himself belting out Call Me Maybe or lip syncing to Cher and Lady Gaga, posts selfies with celebrities at the Met Gala, and broadcasts his face plants while trying out an electric scooter on vacation in Mexico City.

Johnson is just as open about the darker parts of his past.

He moved to New York at 19 after dropping out of college, and emerged as a young poster boy for gay rights, which he ultimately abandoned. “I didn’t want to be 48 years old walking into an event with shoulder pads on and my old football jersey on top of it trying to relive the good old days,” he said. “I thought I had more to offer this world.”

At the time, he didn’t think that future would be in politics. He was a furniture salesman when he learned he had HIV, and lost his job and his health insurance two weeks later. A drinking and cocaine habit soon followed.

“I was full of shame and fear and anxiety, and I didn’t want to speak to anyone about it,” he said. “I started to use drugs and alcohol to self-medicate and cover the feelings of deep shame and guilt and remorse. And it took me five years to realize what I was doing.”

He will mark a decade sober in July, and still calls it his biggest achievement.

“I was a mess,” he said. “To think about that pain and shame and somehow I was able to find a path forward – it almost doesn’t seem real.”