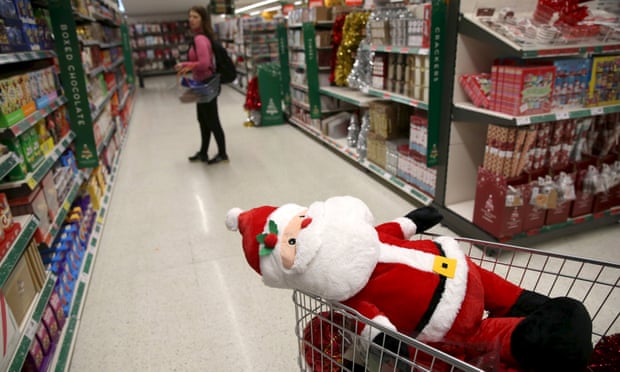 The war on Christmas has become an annual yuletide fiction as reliable as tales of the Grinch, the nutcracker or even of Santa Claus himself. Fox News and its ilk complain about this alleged attack on Christianity each year. Make no mistake, though. There definitely is a war on Christmas, but it is not homosexual leftists like myself who are waging it: it is capitalism.

As my brother James and I often discuss every holiday season, Christians stole an ancient winter pagan holiday and rebranded it as Jesuss birthday. Similarly, hyper-consumerist, labor-destroying, income-inequality-creating and ecologically destructive capitalism has now stolen Christmas from the church.

It is the rightwing which has cast baby Jesus from American Christmas, like a would-be Syrian refugee orphan. Jesus aint the reason for the season because of liberals as such, but because of market forces in late-stage capitalism, which are gleefully celebrated by Republicans, no matter how alienating to souls.

The first battles of this war on Christmas are usually fought right after (and increasingly on) Thanksgiving Day, as Black Friday shoppers are whipped into a frenzy of buying garbage products we dont need, built in ways that maim and kill the people who make them and produced by means that slowly kill us all.

Workers are pulled from their families Thanksgiving tables for these spectacles of sales, which can turn deadly. The average American will spend hundreds of dollars on such Christmas consumerism, often on high-interest credit cards, which leads to more debt, shame and isolation.

The war on Christmas is waged by foisting traditions upon us so repetitive and mechanized that we resent them for alienating us from ourselves and one another.

Take Christmas music: hearing it is like being a goose force-fed before having its liver turned into foie gras. There is nothing joyous about being made to listen to Christmas music in every public space you inhabit against your will, even if you happen to be Christian.

For single people like me, Christmas tunes induce sadness, from missing dead family members to feeling like a loser for not having a partner or kids. For families, it induces the desire to buy more (if you can) and shame (if you cant). The point of this incessant music, like a military march or a church hymn, is to instill a sense of discipline to a higher power: the market.

This war on Christmas is being waged this election year by Republican politicians who are perverting the most basic takeaways of the story of Christs birth. The Christmas story is about a very pregnant mother finding no room at the inn and needing to give birth in a barn. It is quite at odds with Republicans who want to end childrens health insurance and who think orphans under the age of three should be left to die in war-torn countries. And, when Donald Trump and a frightening chunk of Republicans reveal a desire to ban Muslims from our nation, they are violating the many scriptural calls in the old and new testaments to welcome the stranger.

This war on Christmas was waged when the San Bernadino holiday party shooting prompted a spike in guns sales. This is a slap in the face to Jesus and his mandate: If anyone slaps you on the right cheek, turn to them the other cheek also.

Its odd, given how black Christian people are told we must must immediately forgive any and all violence towards us, that Republicans would celebrate a Nevada assemblywoman who sent out a Christmas card in which every adult member of her family is toting a gun. As the Intercept put it: Gun industry executives say mass shootings are good for business. The church of capitalism demands more gun sales, and so Jesuss call to cheek turning must be damned.

Police brutality is pretty effective at snuffing out the Christmas spirit, too. Consider the iconic moment of police threatening protesters beneath a seasons greetings sign in Ferguson last year. We Americans have gone from one hellish Christmas to the next, and brave protesters have been occupying malls and interrupting shoppers business as usual. Yet weve still seen more than 1,000 police killings since the last time our Christian nation gathered around to recall how the angel brought Gods message with the birth of a child: on earth peace, goodwill toward men.

Many conservatives might think the only problem in that image from Ferguson is that the banner said seasons greetings and not Merry Christmas And so they let Jesus be co-opted by the same violent, racist and alienating capitalism which has co-opted our entire world. This war against Christmas is waged right before their very eyes but they just dont see it.

State of the Union: Pelosi expresses her disdain as Trump pitches for re-election