After an organisation executive described the incident as domestic terrorism, debate has raged over what the wider policy and justice repercussions will be 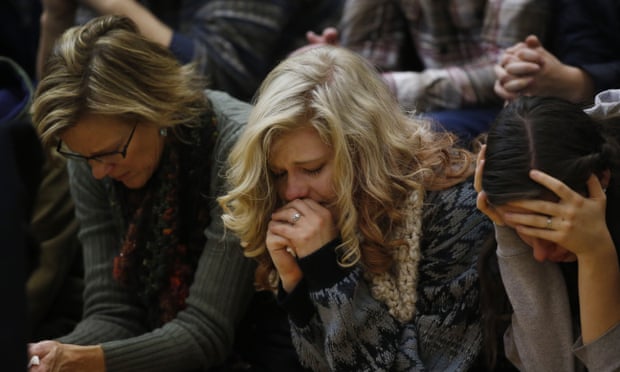 In the hours following the shooting that killed three people and injured nine at a Planned Parenthood center in Colorado Springs on Friday, many politicians and commentators were criticized for supposedly politicizing the tragedy. Some fell into the trap. Others jumped in head-first.

On Friday afternoon, shortly after news of the shooting broke, Vicki Cowart, president and chief executive of Planned Parenthood Rocky Mountains, sent out a statement that referred to domestic terrorism. The statement was subsequently revised, to refer to acts of violence.

Words matter, Cowart told the Guardian on Saturday. And what is the definition of domestic terrorism?

The FBI says it is violent acts or acts dangerous to human life that violate federal or state law, as well as any acts of violence with a distinct ideological message or purpose.

Nonetheless, in Colorado Springs, that question was debated in a highly charged atmosphere.

Critics said such labels should be avoided until a clear motive was established. By Saturday night, though police had not said what motivated the gunman, the mayor of Colorado Springs had said a motive could be inferred by the location of the shooting: a clinic run by a body which provides abortions.

On Saturday morning, however, with now characteristic anger, Barack Obama entered the debate. From the White House, the president issued a statement that connected the incident to the lack of gun control in the US.

I actually dont begrudge Obama his politicization of this event, said Daniel Cole, executive president of the Republican party of El Paso county, in which lies Colorado Springs.

Political problems demand political solutions, and clearly he thinks this is a political problem. But when victims have not even been buried yet, to suggest that If everyone had simply followed my advice yesterday, none of these bad things would have occurred, that sounds a little silly.

He is making the statement before all the facts come out, and the facts might not support his position. We dont know if [the shooter] was carrying a gun that he obtained legally or illegally, and we dont know if he had any type of mental illness.

So its very unclear exactly what strictures Obama would like to create in order to prevent this type of thing from happening. Unless he just wants to take guns from everybody and get it over with.

At an emotional vigil at the All Souls Unitarian Universalist church in Colorado Springs on Saturday, the Rev Nori Rost was not so inclined. In her opening remarks, she referred to the gunman as a domestic terrorist.

It doesnt matter what the cause was, whether it was against Planned Parenthood or not, Rost said after the vigil. A man with an assault rifle fired on and killed people. He was using a weapon of war.

Cowart was the featured speaker. She stressed the necessity of access to female reproductive care, the far-reaching services that Planned Parenthood provides across the nation and the courage of her organizations employees.

We dont yet know why this happened, Cowart told a crowd of 150 to 200 people, crammed into the small church. But we do know why people come to our health centers every day.

They come because something has happened in their body and they dont understand it and theyre afraid, or theyre young and exploring their bodies, and they need someone they can come to.

Most speakers touched on gun control and reproductive rights. Following Cowarts speech, a tearful woman stood and shattered the reverence of the moment.

I support Planned Parenthood 100%, she said. But I came here today because I feel lucky that my entire family is alive, and I thought that we would grieve for the people who died, and not make political statements. So, have a nice day.

To a smattering of applause, the woman walked out of the church.

Asked if the event had strayed too far into politics, Rost said the announcement for the vigil said it was to come together to grieve our losses and to stand with Planned Parenthood.

This was a devastating loss for them, and we wanted to show our support. The announcement was very clear.

He was joined by Ohio governor John Kasich, who tweeted that he was praying for the victims families.

After the release by an anti-abortion group of videos purporting to show Planned Parenthood employees discussing the sale of fetal tissue a charge the federal body has denied the GOP debates have been loaded with anti-Planned Parenthood invective. Republicans in Congress have pushed to defund the organization.

Cowart stopped short of laying responsibility for the shooting at the feet of such Republicans. But she said their campaigning created an environment where it makes it feel OK to take it one step further in bashing Planned Parenthood.

Actions are linked to words, she said, and the speeches we hear set up an environment where unstable people are pushed into inappropriate behavior.

On Saturday night, it was reported that in statements given to law enforcement officials who spoke off the record the suspected gunman at one point said no more baby parts.

State representative Gordon Klingenschmitt, a Colorado Springs resident, took exception at any association between anti-Planned Parenthood activists and the gunman who struck on Friday.

The pro-life community, especially in Colorado Springs, is horrified that this is happening, and we universally condemn the shooter and his violent act, the Republican said. Colorado Springs is a kind of evangelical mecca, but this shooter is from North Carolina.

Police said Robert Dear, the 57-year-old suspect now in custody, was listed as residing in Hartsel, Colorado, though he did have links to the southern state.

You cannot call him a pro-life activist, or a Colorado Springs conservative, because he is not one of us. That is not how we act.

Asked about the notion of domestic terrorism as opposed to foreign, and if there was any analogy between conservative Christians not wanting to be associated with violent extremists who shared their views and moderate Muslims who abhor all acts of terror, Klingenschmitt said the question was not entirely fair.

We as Christians are almost universally willing to renounce violence, he said.

As he spoke, the faith (or lack thereof) of the Planned Parenthood suspect was not known. But whether or not religion played a part, the Colorado Springs shooting had undoubtedly forced Americans to consider a new meaning for the word terrorist.

At the church vigil, Cowart said she was looking forward to continuing her work in the service of womens needs.

We dont think healthcare should be political, she said. We advocate to make sure people continue to receive it, and some folks take it politically.