Its the latest superfood, endorsed by wellness bloggers and celebrities, yet it contains more saturated fat than lard 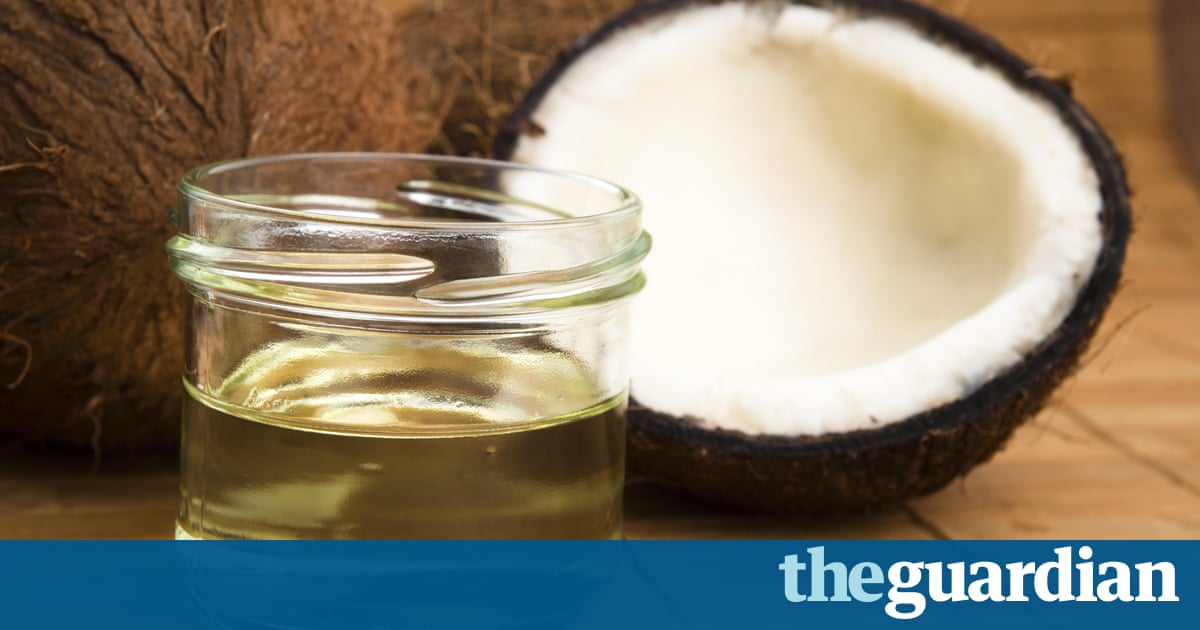 It wasnt that long ago that the closest most Britons got to a coconut was at the fairground or on the inside of a Bounty bar. Yet in the past three years, this hard, hairy drupe (thats the official term) of the coconut palm tree has emerged as the latest superfood extolled by celebrities and health food shops for its nutritional, healing and mind-enhancing powers.

Aisles of health food shops are packed with bags of flour, snacks, milk, sugar and drinks made from its meat and milk. And leading the way is coconut oil, a sweet smelling, greasy fat used for frying, baking, spreading on toast, adding to coffee or simply rubbing into your skin.

Its hard to exaggerate how much hype surrounds coconut oil on health food websites, blogs and YouTube channels. Wellness Mama lists 101 uses including as a mental stimulant, hair conditioner and treatment for insomnia, heartburn, cuts, acne, haemorrhoids, mosquito bites and sunburn. Everdine recommends using coconut oil to cook with at every meal due, while Holland & Barrett claims coconut oil is very healthy, adding: Coconut oil is the little black dress of wellbeing everyone should have some!

Sites such as these, along with celebrity endorsements from the likes of Gwyneth Paltrow and Kourtney Kardashian, have helped UK sales of coconut oil rise over the past four years from around 1m to 16.4m last year, according to consumer research group Kantar.

When it comes to superfoods, coconut oil presses all the buttons: its natural, its enticingly exotic, its surrounded by health claims and at up to 8 for a 500ml pot at Tesco, its suitably pricey. But where this latest superfood differs from benign rivals such as blueberries, goji berries, kale and avocado is that a diet rich in coconut oil may actually be bad for us.

Earlier this month, the American Heart Association (AHA) warned that coconut oil contains the same level of saturated fat as beef dripping. In fact, its so oozing with artery-clogging saturated fat that lard is a healthier option.

The AHA alert, which has followed similar observations from scientists over the years, has triggered an online battle between those who claim the science of coconut oil is more complex and more sophisticated than food scientists acknowledge and those who say food faddists have been duped by clever marketing.

So who is right? Even if coconut oil really is full of saturated fats, are all saturated fats bad? And why do we get such conflicting messages about the fat in our diet?

Coconut oil is pressed from the meat of a coconut. It has been used in Africa, Asia and South America for centuries and was routinely used in American processed food in the middle part of the 20th century. In the 1940s, it was the main source of non-dairy fat in the US diet until it was replaced by vegetable oils, particularly soya bean oil. Concerns about its high saturated fat content emerged in the middle of the last century and are rife today, even as the oil makes a revival among health food lovers.

Priya Tew, spokesperson for the British Dietetic Association, says: Coconut oil is a high saturated fat. Its about 92% saturated fat so more than lard or butter. If a woman has two tablespoons, she is eating 20g of saturated fat, her recommended daily amount.

In the long-established pecking order of fats laid down over many years by public health officials, trans fats are classed as the least healthy. The chemical transformation makes them hard for our bodies to process. They raise levels of bad (LDL) cholesterol and lower good (HDL) cholesterol, increasing the risk of developing heart disease and strokes; they are also linked to type 2 diabetes. In contrast, unsaturated fats are pretty universally accepted as beneficial because they raise levels of good HDL cholesterol. That leaves saturated fats somewhere in the middle.

Since the 1970s, the message from public health bodies has been that they raise bad cholesterol, fur up arteries and increase the risk of strokes, heart disease and heart attacks. Thats the view of the UK government, the World Health Organisation and virtually every other public health body in the world. So where does the idea of coconut oil, one of the richest sources of saturated fat available, being a health food come from?

One branch of evidence often cited by the pro-coconut oil lobby is work done by Dr Marie-Pierre St-Onge, associate professor of nutritional medicine at Cornell University Medical School, in the early 2000s. Her team was looking at the impact on health of medium-chain triglycerides (MCTs), a form of fat molecule that has shorter chains of fatty acid than most and which is found in coconut oil in higher concentrations than any other natural food.

In 2003, her team published research comparing the effects of diets rich in MCTs or long-chain triglycerides (LCTs) on 24 overweight men. She found that eating more MCTs over the month-long study led to losing an extra pound in weight compared with those eating a similar amount of LCTs. Further studies had similar findings. In 2008, she showed that a diet containing MCTs led to more weight loss than a similar diet containing olive oil.

It was a fascinating result and a reminder that not all saturated fats are the same. And it was leapt upon by coconut oil supporters. Holland & Barretts website, for instance, claims that the majority of fat in coconut oil is made up of MCTs. But the link from these studies to coconut oil was arguably a leap too far. Recent studies suggest that coconut oil actually comprises just 13-15% MCTs. The rest are traditional LCTs.

From what I can tell, my research is being used to say that coconut oil is healthy, but this is a very liberal extrapolation of what weve actually studied, says Dr St-Onge.

In her tests, volunteers were given a concoction made from 100% MCTs.

We dont know if the amount in coconut oil is sufficient to have similar effects as pure MCT oil in releasing energy expenditure and improving satiety and weight management. From recent studies, it seems that it is not.