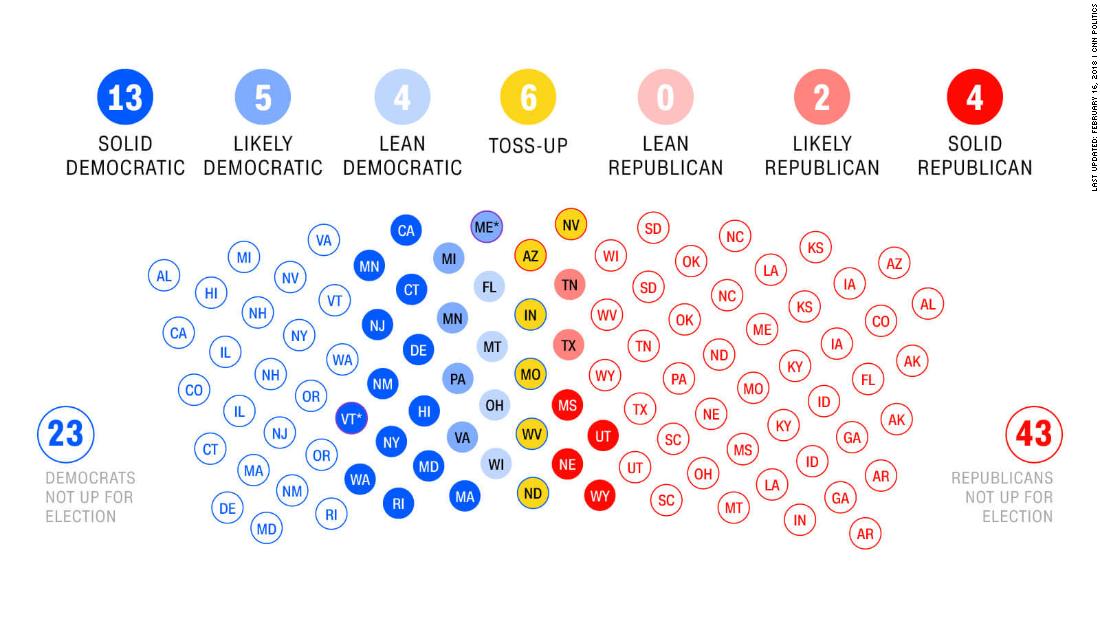 Washington (CNN)Democrats face a narrow path to win the US Senate majority in 2018.

But there is still a path, according to CNN’s new Key Race Ratings for the midterm elections.
Related: CNN’s Key Races – House
It starts with defending all the seats the party currently holds, which include 10 incumbents running for re-election in states that Donald Trump carried in 2016. Five of those he won by double digits.
The current balance of power in the Senate is 51 Republicans and 49 Democrats, thanks to Democrat Doug Jones’ stunning special election victory in Alabama last month.
It seems so close for Democrats — if they can protect their seats, then they need to gain just two to win the majority. But the map this year is tilted heavily in Republicans’ favor.
Democrats’ hopes reside in the Southwest, with prime pickup opportunities in Nevada and Arizona. But they have no room for error and will need some luck if they want to take control of the Senate.
Here are some places and themes to keep an eye on between now and November:

It’s hard to see the Democrats claiming the majority in the Senate without winning both of these Sun Belt seats.
Jeff Flake’s retirement creates an open seat in Arizona, with Democrats landing a top recruit in Rep. Kyrsten Sinema and a tough primary fight on the Republican side between Rep. Martha McSally, former state Sen. Kelli Ward and former Maricopa County Sheriff Joe Arpaio. In Nevada, incumbent Republican Dean Heller is facing a primary challenge from perennial candidate Danny Tarkanian. If Heller survives, he’ll then have a difficult general election contest against Rep. Jacky Rosen in a state Hillary Clinton won by a little more than 2 points.
Both of these contests are rated toss-ups in our initial rankings.

Every football fan is familiar with the adage “defense wins championships.” For 2018, the same could be true for Democrats’ hopes of winning the Senate majority.
The five states Trump won by double digits — Indiana, Missouri, Montana, North Dakota and West Virginia — should be prime pickup opportunities for Republicans. But the GOP has struggled to recruit in some of these states, leaving Democrats feeling better about their prospects of retaining these seats.
That is particularly true in Montana, where Jon Tester is seeking a third term, and North Dakota, where Heidi Heitkamp is running for a second term. 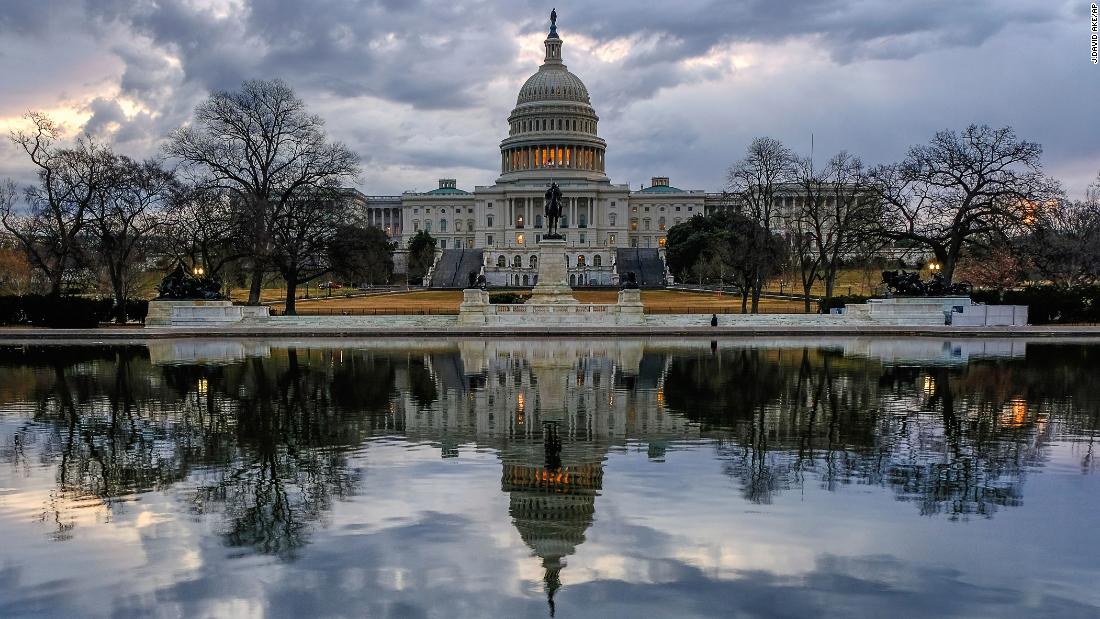 One state where Republicans landed a top-tier candidate — Missouri — with state Attorney General Josh Hawley looking to challenge Sen. Claire McCaskill. Republicans have a pair of combative primaries on their hands in Indiana and West Virginia, which will determine who gets to take on a pair of Joes — Sens. Donnelly and Manchin.
Those three states are rated toss-ups in our inaugural rankings, while Montana and North Dakota both lean Democratic at this stage.

The GOP’s recruitment struggles are evident in five other states Trump won in 2016 but that had gone for President Barack Obama in 2012: Florida, Michigan, Ohio, Pennsylvania and Wisconsin.
Florida is the biggest wild card on the map, with Republicans waiting for the state’s independently wealthy governor, Rick Scott, to announce whether he will jump into the race against Democrat Bill Nelson — a move that has the potential to shake up the Senate landscape.
Republicans in Ohio had to scramble a bit after state Treasurer Josh Mandel unexpectedly left the race to take on Sen. Sherrod Brown. Rep. Jim Renacci abandoned his gubernatorial bid to run for Senate.
It’s unclear who will emerge from contested GOP primaries in Michigan and Wisconsin, a pair of Rust Belt states Trump narrowly won. Democratic incumbent Sens. Tammy Baldwin and Debbie Stabenow hold healthy cash-on-hand totals in those states. The same goes for Democratic Sen. Bob Casey in Pennsylvania, who has more than $8 million in the bank at last check, compared with about $1 million for GOP Rep. Lou Barletta.
For now, Florida, Ohio and Wisconsin are rated Lean Democratic, while Michigan and Pennsylvania are in the Likely Democratic column.

CNN’s 2018 House and Senate Race Ratings are based on a number of factors and data points. These include candidate recruitment, fundraising strength, districts’ voting history, voter registration data by party and recent voting trends, as well as CNN’s political reporting and analysis.

Toss-up: The most competitive seats, where each party is heavily investing and each party has a roughly equal chance of winning.
Lean: Seats where one party has a slight advantage, but are solidly within the universe of competitive races.
Likely: Seats where one party has a clear advantage, but that could become competitive. During a true wave election, these are the seats to watch.
Wave election: Any election where one party makes significant gains in one or both chambers of Congress. The most recent wave election occurred in 2010, when Republicans picked up an astonishing 63 seats in the House and 6 in the Senate.
Pickup: A seat is picked up when it changes from one party to the other. In 2018, Democrats need 24 net pickups to win party control of the House, and two net pickups to win back the Senate.
Open seat: Any House or Senate seat that does not have an incumbent running for re-election. Seats open up due to members retiring, resigning, running for another office, or dying.
Retiring: A member is retiring when he announces he will step down at the end of a term. Many members do this if they think they will lose re-election, or if they are term-limited out of committee chairmanships. Prominent members who are retiring at the end of the current Congress include California Republican Reps. Darrell Issa in the 49th District and Ed Royce in the 39th District and Democratic Rep. Ruben Kihuen in Nevada’s 4th District.
Resigning: A member resigns when he steps down before the end of his current term. Recent examples of this include Michigan Democratic Rep. John Conyers, Arizona Republican Rep. Trent Franks and Pennsylvania Republican Rep. Tim Murphy.