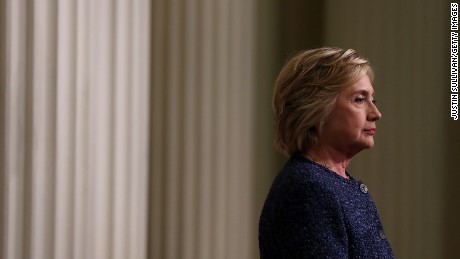 (CNN)Hillary Clinton, calling into a fundraiser she was supposed to headline in person, told donors in San Francisco on Monday night that it was hard to follow her doctor’s orders and stay home after being diagnosed with pneumonia.

“It doesn’t come easy to me to follow my doctor’s orders to rest up so I can get on the campaign trail but I am going to do it because we have so much work still ahead of us,” Clinton said, according to audio of Clinton’s call provided to CNN by an event attendee.
“I wish so much I could be there,” Clinton added.
Clinton’s doctor diagnosed the Democratic presidential nominee with the respiratory condition on Friday, but Clinton’s campaign did not disclose the ailment until Sunday, when she wobbled and then lost her balance as she was helped into her van after the 9/11 memorial ceremony.
After the incident, Clinton’s campaign canceled her three-day West Coast swing, including stops in San Francisco, Los Angeles and Las Vegas. Former President Bill Clinton will fill in for his wife on Tuesday at two fundraisers in Los Angeles, per an aide, as well as on Wednesday in Las Vegas.
On Monday, Clinton’s call was introduced by California Lt. Gov. Gavin Newsom.
“We have got to work to heal the divides in our country,” Clinton told donors, just days after she told New York donors on Friday that half of Donald Trump’s supporters fell into a “basket of deplorables.”
The remark drew a rebuke from Republicans and some Democrats.
“We have got to see one another, hear one another, help one another and I want to be a president who inspires that,” Clinton said.
According to a Clinton aide, 2,500 people attended the fundraiser.
But donors in the room told CNN that the event was partially empty, a fact they attributed to Clinton’s absence.