Though the Democratic nominating process is far from finished, Clinton has focused her fire on GOP opponents and they have returned the favor 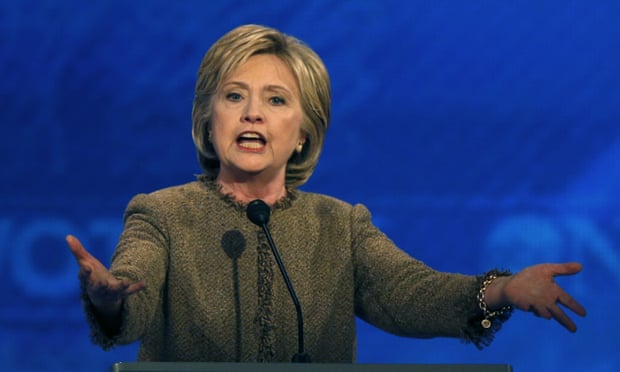 In the Republican debate this week in Las Vegas, the audience could have been excused for believing the partys Democratic rival for the White House had already been chosen.

To take our country back, to keep our nation safe, we have to begin by defeating Hillary Clinton, said Carly Fiorina, in closing.

In Saturday nights Democratic debate in New Hampshire, Clinton returned the attention with a message that targeted Republicans more than Bernie Sanders and Martin OMalley, the challengers standing to her right and left. It was a performance that suggested the frontrunner may believe the nomination is now within her grasp.

On January 20th, 2017, the next president of the United States will walk into the White House, Clinton said in her closing statement. If, heaven forbid, that next president is a Republican, I think its pretty clear we know what will happen.

Social security, which Republicans call a Ponzi scheme, may face privatization. Our vets may see the VA hospital that needs to be improved and made better for them turned over to privatization. Planned Parenthood will be defunded. The list goes on because the differences are so stark.

Those remarks focused on domestic policy. Though some Republican candidates seized on such issues in their responses to the debate Jeb Bush tweeted: Nothing like listening to three Democrats argue about who is going to raise taxes the most most focused their fire on Clintons statement during the debate on foreign policy that the US was finally where we need to be in the fight against Islamic State.

On Sunday, New Jersey governor Chris Christie appeared on ABCs This Week to discuss his rising fortunes in New Hampshire and was predictably direct in his criticism.

Mrs Clinton is Mrs Happy Talk and she wants to talk her way into the White House. She is the personification of this administration.

Other candidates, including Bush and Rand Paul, also seized on Clintons remark. The only Republican candidate mentioned by name by any of the candidates on stage at Saint Anselm College, however, was the frontrunner, Donald Trump. The billionaire was mentioned nine times.

Notably, Clinton called Trump Isiss best recruiter, and claimed the terrorist network was using footage of the real-estate mogul as a recruiting tool.

Trump rejected the claim, on Twitter and later on the Sunday shows.

On the Democratic side, Clinton communications director Jennifer Palmieri used an appearance on ABC to argue that the candidate had been talking about Isiss use of social media and not a specific video.

On Saturday night, asked in the post-debate spin room about that allegation, Clinton campaign manager Robby Mook pointed to an NBC report but did not offer evidence that Isis was using videos of Trump.

Defending the attention paid to the bombastic Republican frontrunner by his candidate, Mook said Clinton was simply highlighting whats at stake in this election.

If our next president is a Republican like Donald Trump or any of the rest of the candidates, were going to see all the progress that weve made on the economy ripped away, Mook said.

Not one of them has a clear plan to defeat Isis, so she was simply referring to the stakes.

Shes trying to win every vote

Saturdays debate was perhaps the last, best chance for Vermont senator Sanders and former Maryland governor OMalley to change the dynamics of the Democratic primary.

Both are trailing Clinton nationally, though Sanders and Clinton are in a tight battle in New Hampshire, the crucial early voting state where the debate was held. Even so, the takeaway of the evening was Clintons clear attempt to position herself as the partys inevitable nominee.

She is trying to win every vote, he said, responding to a question from the Guardian. She is competing here in New Hampshire where it is obviously very close; she is competing for every caucus-goer in Iowa where we maintain a lead, but I think our first job is to win this nomination.

Political pundits agreed that the candidates all had strong debate performances, for the first time clearly distilling the key differences between their campaigns.

OMalley, the only candidate to wander into the spin room, was asked if he thought he had broken through.

He expanded later, adding: We got done everything that we wanted to get done. I believe I won the debate because I have always been about getting things done.

Notably, Clinton chose not to fight with Sanders over his campaigns breach of her voter data this week. The dispute had threatened to overshadow the debate, but it was dispatched within the opening minutes when Sanders apologized and Clinton accepted the apology.

The exchange diffused much of the tension, at least publicly, between the campaigns. I very much appreciate that comment, Bernie, Clinton said. It really is important that we go forward on this.

If the Clinton campaign is now eyeing the race for the White House, it has been dogged by criticism that it faces an enthusiasm gap, especially among young people. If voters believe Clinton is a foregone conclusion for the nomination, such opinion has it, she could forfeit the chance to energize voters around her candidacy.

On Sunday, the campaign sought to assure donors the candidate was still fighting for every vote, as she promised at the outset of her campaign.

I dont know how else to say it except by saying it: we could lose the nomination, read an email to donors.

The other candidates on that stage last night would like nothing more than for our team to sit back and relax right now, but I am not taking anything for granted.