The British have long associated delicious food with depraved indulgence, and now we have virtuous meals that are good for the soul. Is either attitude really healthy? 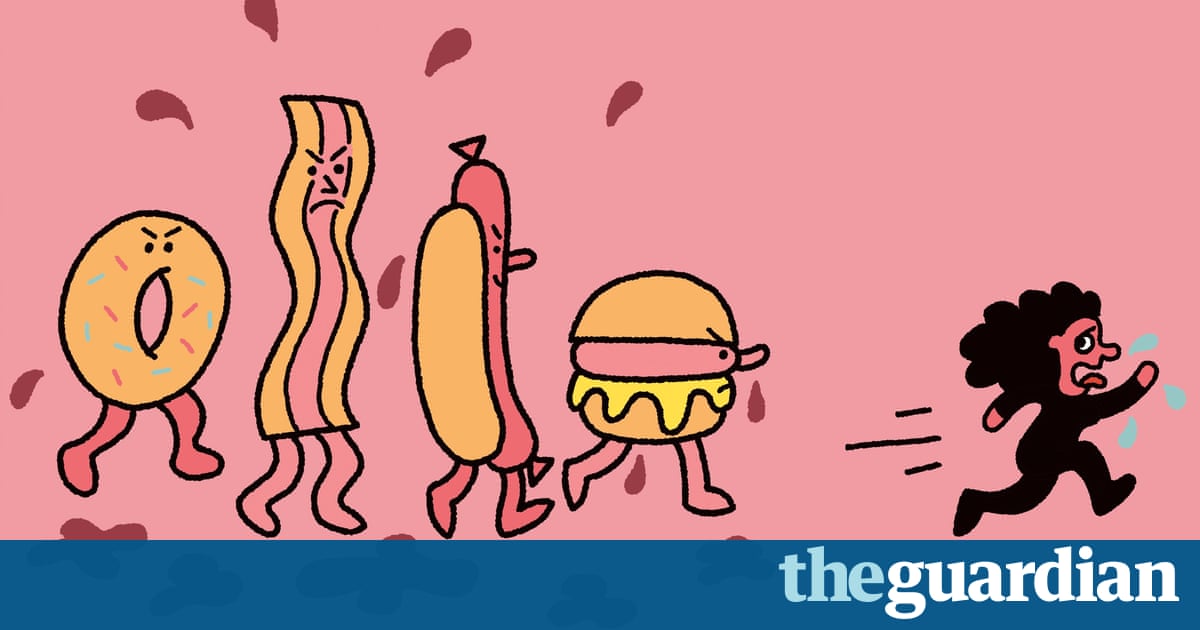 The way these cream cakes flaunt themselves, says saucy Carry On star Barbara Windsor, glaring disapprovingly at a chocolate eclair bursting with whipped cream, its enough to lead a girl astray. Her frown turns into a giggle. Given half a chance, she adds before tucking in gleefully.

Nothing captures the peculiarly moralistic British attitude to food better than this 15-second advert from the 1970s. And if poetry is the art of capturing whole worlds in few words then its immortal slogan naughty but nice is greater proof of its authors artistry than the Booker prize its writer Salman Rushdie would go on to win.

For as long as we can remember, the British have associated delicious food with depraved indulgence. Anything that tastes good has got to be bad for your body, soul or both. The marketing department of Magnum knew this when it called its 2002 limited edition range the Seven Deadly Sins. Nothing makes a product more enticing than its being naughty, or even better, wicked.

In recent years, however, the moralistic lexicon of food seems to have expanded. One recent fad has been for dirty American food, a term that revels in the idea that fatty burgers and messy pulled pork buns are so right because theyre so wrong.

The yin to the yang of these forbidden yet readily available pleasures are all the virtuous foods that we are being offered to expiate our eating sins: the pure, the raw, the natural and, most recently, the clean, a trend that came of age when the BBC Good Food website gave the category its own section. Clean eating is often claimed to have almost miraculous healing powers, with food becoming medicine, recipes prescriptions. But its proponents often go beyond physical health, making claims that eating well is good for the soul too. The Hemsley sisters dont just offer recipes but a simple, mindful and intuitive philosophy with no fewer than 15 pillars, while Deliciously Ella Mills implores you not only to Love Your Food, but to Love Your Life and Love Your Self with capital letters too.

Perhaps the clearest proof that the way we talk about food is saturated with moralism is the ubiquity of the term guilt. Marketing departments have seen the power of this and promoted guilt-free snacks and treats. This promises an escape from self-recrimination but simply reinforces it by suggesting that eating the wrong kinds of foods does and should make you feel guilty. Hence Madeleine Shaws Ready Steady Glow contains a section on self-love which includes forgiveness, begging the question as to why exactly we need to forgive.

These ways of talking are so embedded in our culture that it is tempting to think they are natural and harmless. But they are neither. The writer Bee Wilson has examined the way we learn to eat from birth. The moralising language around food encourages us to eat in ways which are both less pleasurable, she told me, and also actually less healthy.

Psychotherapists Susie Orbach and Holli Rubin agree. Be mindful of the language you use, they cautioned in a 2014 report on body image for the Government Equalities Office, urging particular care about words that cast food or bodies as having intrinsic moral worth.

Moralising about food is not universal. It seemsespecially evident in Protestant and particularly Anglo-Saxon cultures where, as Wilson puts it, there is a polarity between pleasure and virtue in which we enjoy forbidding things and then indulging.

This is also seen in attitudes towards sex, which leads many to suggest there is a deep link between the two. Food is your first intimate relationship, says Orbach. But I suspect that the only thing that links the bedroom and the kitchen is that in both places we enjoy pleasures of the flesh which our inherited morality disapproves of. The association of food and sex is therefore not inherent, but a byproduct of our twisted morality.

The moralisation of food is not as pronounced in the Catholic cultures of France and Italy, nor in the Jewish tradition in which Orbach grew up, in which any visitor to the home is fed. Growing up in England she found that in other peoples houses she was told to wait in the other room when they were eating. They hate food! she tells me, with a mixture of amusement and horror.

Every culture has rules and taboos around food but not all of them create pernicious connections between pleasure and sin. In many religions, certain foods are unclean and must not be eaten. Generally speaking, people in those cultures simply follow the rules and are disgusted by the idea of breaking them. Foods are forbidden without being forbidden pleasures: Muslims and Jews do not tend to secretly binge on bacon sandwiches and then feel bad about it.

For an even starker contrast, consider India, where there is a long tradition of following principles about the right way to eat, based on Ayurvedic medicine. Although this clearly carries with it ideas of right and wrong, these differ from the Anglo-Saxon in that foods are not divided into good and bad, clean and dirty. What matters is when you eat and in what combination. Its all about balance and how food affects your body, says chef Roopa Gulati, extolling the merits of the thali. This exemplifies the truth that there are no good and bad foods, only bad diets.

The idea of balance appears to be central in all non-moralistic food cultures. Take Confucianism, for example, which is deeply embedded in many East Asian societies. The only bad foods in Confucian texts are those that have been adulterated or have gone off. For everything else, the doctrine of the mean applies, meaning that as long as you avoid extremes, everything is permitted. The Analects give examples of Confucius following this principle: Though there might be a large quantity of meat, he would not allow what he took to exceed the due proportion for the rice.

The Confucian and Ayurvedic systems are concerned with the best way to live in order that we should flourish, not with identifying certain foods as sinful. So there is a sense in which Barbara Windsors cream cakes are bad, in that they are largely empty calories and eating a lot of them would probably make us fat. But we are not bad people if we eat them, morally stained and in need of penitence. Eating badly is not a sin, it is simply imprudent.

One feature of non-moralistic ethics is theemphasis is on the manner in which we do things, rather than prohibition. If you bring the right attitude to your eating, little is off-limits.

You can see this in a remarkable short book called Instructions for the Zen Cook, written by the Japanese monk Dgen in the 13th century. Dgen is so concerned with how we cook and eat that he positively encourages indifference to exactly what we eat. Greens, for example, were considered in his time to be boring, tasteless and not even all that nutritious. Yet Dgen asks that we handle even a single leaf of green in such a way that it manifests the body of the Buddha. We should approach our eating as we do everything in life, not distinguishing between the major and the minor but taking everything as an opportunity to practise the right attitudes of gratefulness and buoyancy.