As global equity investors reel from the biggest selloff in two years, nowhere has the pain been more acute than in China and Hong Kong.

Benchmark indexes in the world’s second- and fourth-largest stock markets have fallen faster than any of their major peers since the rout began late last month, with worries over a Chinese deleveraging campaign adding to global concerns about rising interest rates and stretched valuations. As losses accelerated on Friday, both markets snapped their longest-ever streaks without a 10 percent correction.

The sudden tumble, China’s worst since the nation’s 2015 market collapse, has shocked investors who had grown accustomed to the calming effect of state intervention over the past two years. But after guiding the Shanghai Composite Index to its steadiest bull market in history, Chinese authorities are now showing an increased tolerance for losses as they seek to snuff out moral hazard and reduce risk in the nation’s $16 trillion shadow-financing system.

The big questions are whether stocks are signaling trouble ahead for the world’s second-largest economy, and whether declines in China will create a negative-feedback loop with international markets.

For now at least, analysts aren’t anticipating a 2015-style meltdown. They’re still sanguine about China’s growth outlook, with the consensus estimate for 2018 holding steady at 6.5 percent. Optimists point to calmer price action in the corporate bond market and the yuan, which still trades near its strongest in two years against the dollar.

Read more on the global slump: Six Views on How the Correction Finally Came

That said, market declines in China have a habit of snowballing. Many observers are braced for more volatility as liquidity conditions tighten before the Chinese New Year break that starts next week. On average, declines of 10 percent or more in the Shanghai Composite have lasted two months before the index began a reversal of the same magnitude.

“We are still in the depth of market volatility as sentiment was hurt by the double whammy of U.S. market turmoil and deleveraging efforts at home,” said Wu Kan, a Shanghai-based fund manager at Shanshan Finance Co. “Risk appetite has dropped sharply and I don’t think the situation will get any better before the Chinese New Year holiday.”

The Shanghai Composite sank 4.1 percent to 3,129.85 on Friday, extending its slump from a Jan. 24 high to 12 percent. Hong Kong’s Hang Seng Index lost 3.1 percent, while the Hang Seng China Enterprises Index of mainland companies in the city retreated 3.9 percent. The yuan strengthened 0.33 percent to 6.2977 per dollar in onshore trading. 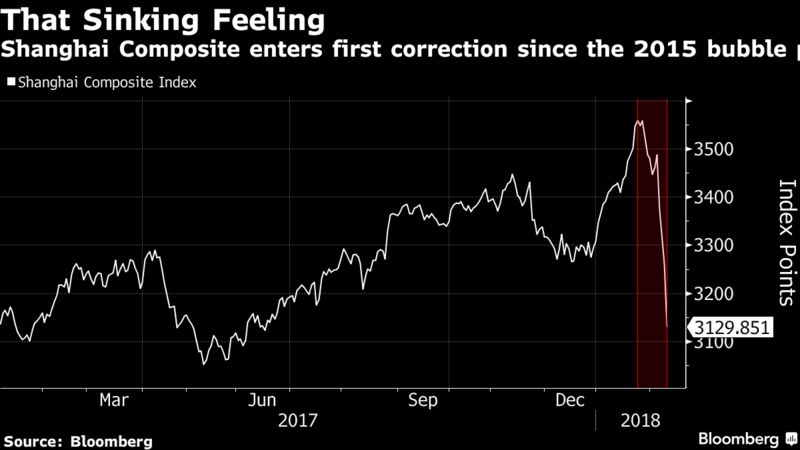 Before losses in Chinese stocks shifted into high gear on Tuesday, the market had seemed like it would become a haven amid the global storm. The Shanghai Composite rose 0.7 percent on Monday, brushing off a tumble in U.S. stocks that sent the S&P 500 down more than 2 percent last Friday.

China’s equity market has always been somewhat insulated to global swings due to the country’s capital controls, and it has been unusually stable since Liu Shiyu took over as chairman of the China Securities Regulatory Commission with a mandate to rein in volatility in February 2016.

But the country’s markets have also grown more integrated with the international financial system in recent years after the opening of cross-border trading links with Hong Kong, making them more susceptible to turbulence overseas.

“Slowly but surely Chinese markets have become more connected with the rest of the world, so when you have a strong selloff in the U.S., Europe and Japan, increasingly you’re probably going to see more reaction also taking place in mainland China,” said Stefan Hofer, Asia chief investment strategist at LGT Bank AG in Hong Kong.

Opinions differ on the triggers for the global selloff — analysts have cited everything from rising bond yields to inflated valuations and hedge funds selling out of arcane positions — but one factor that has almost certainly weighed on Chinese shares is the government’s deleveraging campaign. The clampdown on shadowy wealth-management products has siphoned money from the equity market, pushed up corporate borrowing costs and raised the spectre of rising defaults.

While authorities would likely ease up on the crackdown if the market slump spirals into a crash, Jinkuang Investment Management’s Zhang Haidong said losses in stocks aren’t yet deep enough for the so-called National Team of state-run funds to ride to the rescue. The Shanghai Composite trades at about 16 times reported earnings, 7 percent higher than its five-year average, according to data compiled by Bloomberg.

“The market doesn’t look like it needs the helping hand of the National Team as it did back in 2015,” said Zhang, a Shanghai-based fund manager at Jinkuang Investment. “It’s still a rational correction after accumulated gains.”

As to whether the losses in China will spill over into other markets, CMB International Securities Ltd. strategist Daniel So said the chances of that happening are small for now. Futures on the S&P 500 were trading 0.7 percent higher before the open of U.S. markets on Friday.

“There’s a risk of a negative feedback loop, but I’d say that risk is still small,” So said. “Shares may remain weak before the Chinese New Year holiday, but it’s unlikely that the steep declines like today will occur again.”