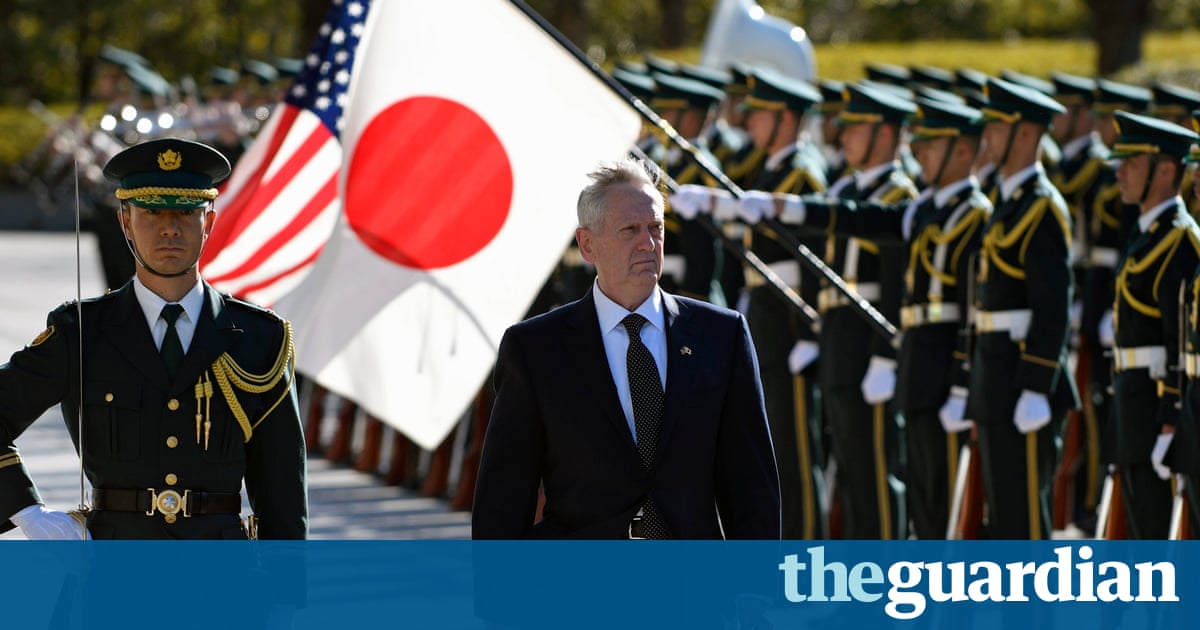 China has accused the US of putting the stability of the Asia-Pacific at risk after Donald Trumps defence secretary said Washington would come to Japans defence in the event of a conflict with Beijing over the disputed Senkaku islands.

James Mattis, on a two-day visit to Japan, said the islands, which are controlled by Japan but also claimed by China, fell within the scope of the Japan-US security treaty, under which Washington is obliged to defend all areas under Japanese administrative control.

Mattis also made clear that the US opposed any unilateral action that risked undermining Japans control of the Senkakus, a group of uninhabited islets that are surrounded by rich fishing grounds and potentially large natural gas deposits.

I want to make certain that Article 5 of our mutual defence treaty is understood to be as real to us today as it was a year ago, five years ago and as it will be a year, and 10 years, from now, Mattis, a retired marine general who has served in South Korea and Japan, told Japans prime minister, Shinzo Abe, on Friday evening.

On Saturday, Chinas foreign ministry called on the US to stop issuing wrong remarks about the Senkakus, which are located in the East China Sea and known as the Diaoyu in China. The ministry said in a statement that the US should avoid complicating the issue and bringing instability to the regional situation.

Mattiss vow that the US would defend the Senkakus came at the end of a four-day visit to South Korea and Japan, during which he has sought to reassure the US allies of the Trump administrations commitment to their security.

I want there to be no misunderstanding during the transition in Washington that we stand firmly, 100% shoulder-to-shoulder with you and the Japanese people, he said.

On Saturday, he told Japans defence minister, Tomomi Inada, that their countries alliance was the cornerstone of regional stability.

Earlier in the week, Mattis issued similar reassurance to South Korea and warned North Korea that any use of nuclear weapons would be met with an effective an overwhelming response.

The United States stands by its commitments, and we stand with our allies, the South Korean people, Mattis said in Seoul.

The decision to make Japan and South Korea Mattiss first overseas destination as defence secretary is seen as an attempt to calm local nerves: last year Trump suggested that the US could significantly roll back its military presence in the region, despite growing concern over Chinese island building in the South China Sea and North Koreas nuclear and ballistic missile programmes.

In contrast to the rhetoric used by other senior figures in the Trump administration, Mattis said he saw no need for US military action in the South China Sea, but reiterated that freedom of navigation in the strategically and commercially important waterway was absolute.

His measured language also contrasted with that of Trump, who criticised Japan and South Koreas commitment to their alliances with the US during his run for the White House, and hinted at a possible military withdrawal unless they paid more towards the cost of hosting American troops.

The US has 28,500 troops in South Korean and 47,000 in Japan, mostly on the southern island of Okinawa, where Mattis served as a young marine officer in the early 1970s.

Japan has made noteworthy contributions to regional security and to the alliance, and the United States deeply appreciates Japans contributions, he said. But make no mistake: in my meeting with Japanese leaders, both our nations recognize that we must not be found complacent in the face of the challenges we face.

On Friday, Mattis said the US had an ironclad commitment to defending its allies in Asia, and warned North Korea that any attempt to use nuclear weapons would invite a severe response. Any attack on the United States, or our allies, will be defeated, and any use of nuclear weapons would be met with a response that would be effective and overwhelming, he said in Seoul.

In addition to friction over the Senkakus and the South China Sea, Beijing has criticised an agreement to deploy a US missile defence system, known as terminal high-altitude area defence (Thaad) in South Korea later this year.

China says the system could upset the balance of power in the region, despite US claims that its sole purpose is to counter the missile threat from North Korea.

We have resolute opposition to the deployment of Thaad to South Korea by the US and (South Korea), Chinese foreign ministry spokesman Lu Kang said in a statement. Such actions will jeopardise security and the strategic interests of regional countries, including China, and undermine the strategic balance in the region.