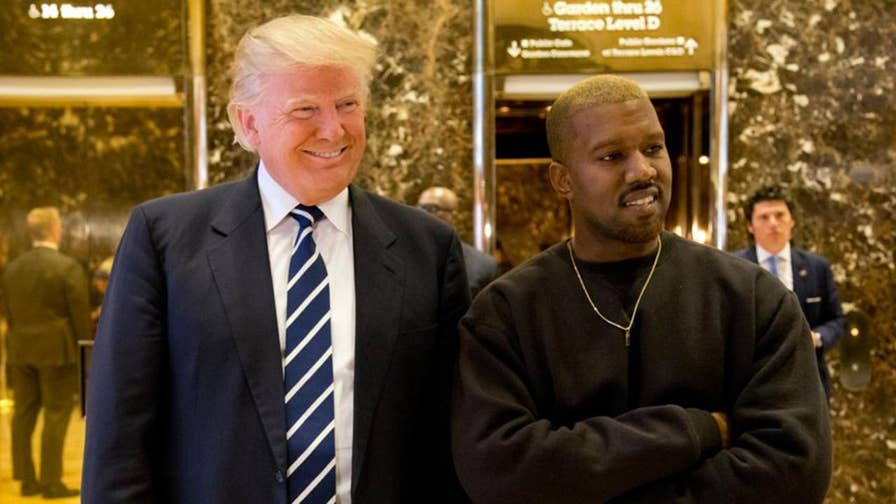 President Trump thanks the rapper for his support; reaction and analysis on ‘The Five.’

Not everyone is a fan of Kanye West’s recent tweets about President Trump.

West’s fellow stars have lashed out against West’s pro-Trump tweets and a few even reportedly unfollowed the rapper for his latest rant.

The “Famous” rapper, who has always been known for his out-of-the-box thoughts, engaged in a Twitter tirade which began on Tuesday and extended into Wednesday afternoon. He tweeted about everything from Coachella, his family and Donald Trump.

You don’t have to agree with trump but the mob can’t make me not love him. We are both dragon energy. He is my brother. I love everyone. I don’t agree with everything anyone does. That’s what makes us individuals. And we have the right to independent thought.

In other tweets, the rapper showed off his MAGA hat and even took a selfie with it. West’s tweets later caught the eye of the president who tweeted, “Thank you Kanye, very cool!”

But West’s string of Twitter tweets supporting Trump’s presidency didn’t go over to well with some of his celebrity friends.

“Westworld” star Jeffrey Wright tweeted, “If you think Donald Trump is a good alternative to anything, you’re out of your phucking tree.”

‘Me and Trump got dragon power.’

John Legend praised West’s brilliance but said he didn’t agree with his views in another tweet which read, “I love that great, brilliant artists have the power to imagine a better future. But artists can’t be blind to the truth.”

The defining trait of Trump’s campaign and political profile was his embrace of white supremacy. He made it clear every time he spoke. Some serious cognitive dissonance to ignore that for the other x% you might find appealing. I guess I agree with >1% of anyone’s thoughts though

Other celebrities indirectly called the rapper out.

“Get Out” director Jordan Peele tweeted that he was “inspired” to begin writing a “Get Out 2” script while Kumail Nanjiani said, “This was the worst twitter day in Twitter history.”

*Gets inspired
*Starts writing ‘Get Out 2’ https://t.co/zqOW6Xxx9v

So, they’re streaming music in The Sunken Place?? That’s got Be where the audience @kanyewest is courting is gonna buy that new release!#shallwesavehim#hedon’twannabesaved

Wondering if Laura Ingraham will be telling him to shut up and rap on her show tonight. https://t.co/Kxh40eMHTj

According to Pop Crave, Justin Bieber, BTS, The Weeknd, Rihanna, Ariana Grande, Harry Styles, Katy Perry, Nicki Minaj, and Kendrick Lamar are among the famous names who unfollowed the rapper.

But not everyone has condemned West for his controversial statements.

Chance the Rapper chimed into the heated topic and said, “Black people don’t have to be Democrats.”

Black people don’t have to be democrats.

He later followed up with another tweet which read, “Next President gon be independent.”

West’s wife, Kim Kardashian, also stepped into the conversation when her husband’s mental health was questioned.

While she defended her husband’s rant, she clarified that while she respects her husband, they have different political views. Kardashian also said that everyone, including West, should be able to express their own opinions without backlash.

To the media trying to demonize my husband let me just say this… your commentary on Kanye being erratic & his tweets being disturbing is actually scary. So quick to label him as having mental health issues for just being himself when he has always been expressive is not fair

“When he spoke out about Trump… Most people (including myself) have very different feelings & opinions about this,” Kardashian tweeted. “But this is HIS opinion. I believe in people being able to have their own opinions, even if really different from mine. He never said he agrees with his politics.”

You can find Morgan M. Evans on Twitter @themizfactor.