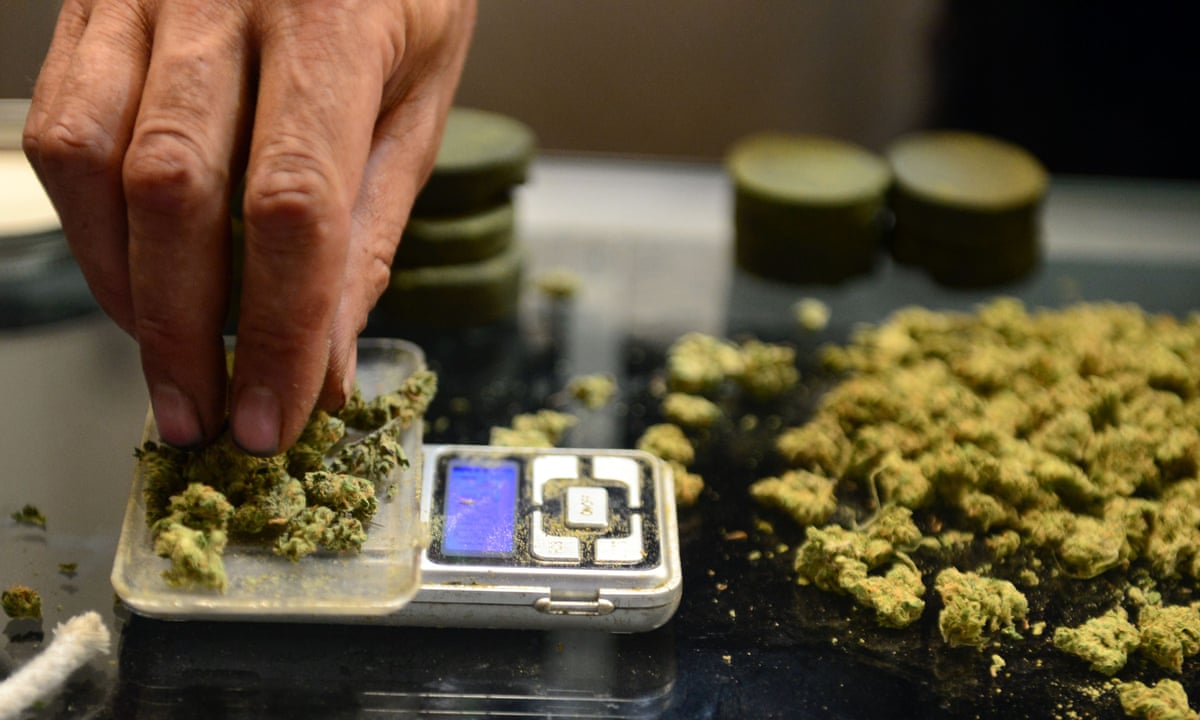 The Sacramento branch of the California tax collection agency reeks of marijuana.

Thats because its cash day at the collection center when marijuana dispensary owners are allowed to bring in paper money to pay their quarterly sales tax bill and the smell of their inventory clings to everything.

California, like all states with any form of legalized marijuana, faces a growing problem over the federal governments position that cannabis remains a Schedule 1 illegal drug, classified the same way as meth or cocaine, with no legal uses and therefore no legal access to traditional banks.

That means medical marijuana dispensaries, along with growers, distributors and other marijuana-related businesses that are operating legally under state laws, have no choice but to be cash-only businesses. They cant write checks, deposit money in financial institutions or make credit card transactions.

Weve been a cash industry for ever and it has been quite a problem, said Kimberly, the director of a non-profit dispensary in Sacramento who asked that her last name not be used for safety reasons. We dont want to drive around town paying our bills in cash. We want to be able to just go to the bank.

Kimberly was at the tax office making a payment of more than $30,000, but officials with the agency, the board of equalization, say that is a relatively small amount. Recently at the San Francisco office, a $400,000 payment came in, carried in a big bag, said George Runner, a BOE board member. The day before in Sacramento, $150,000 came in as a single payment.

That kind of cash being brought to a non-secure facility raises safety issues, as well as practical ones issues that the BOE and other agencies are scrambling to address as new medical marijuana laws in the state increase the amount of taxes being paid.

The BOE estimates that last year, it took in about $200m in cash payments from marijuana businesses, though its hard to tell what the actual amount is, since, Runner said, we dont always know who is a cannabis-related business.

He does know it is leading to some strange problems. The teller windows in the office, for example, do not have slots big enough for the cash-stuffed envelopes to slide through. They will have to be retrofitted to be bigger.

In the meantime, the office staff is forced to come out of their safe rooms to receive payments.

Inside the cash room at the Sacramento office, money is stored in a shiny black safe that looks straight out of the old west, with a large silver spin dial on the front and a gold Betty Boop statue on top. Though about 4ft tall, the safe still sometimes gets stuffed to capacity.

BOE staff said that sometimes the cash drawers at the windows get so full and the office so busy that money ends up being stacked on desks, out in the open.

And sometimes, instead of the aroma of cannabis, the room smells strongly of fabric softener because some depositors wash the money in a dryer before coming in.

Its been interesting, Runner said.

Legalizing recreational marijuana is on Californias ballot this year. If it passes, the state expects up to an additional $1bn in annual tax payments from retail sales all in cash. California already brings in the most marijuana revenue of any state through medical cannabis alone, with an estimated $2.7bn in sales last year.

Runner and his BOE colleagues say that because it is unlikely federal regulations will change anytime soon, they have been working on their own long-term solutions to deal with an increase.

Some ideas tossed around have included self-service teller kiosks placed around town like tax ATMs, and contracting with banks to allow the BOE to use a secure back room to receive payments. They have even looked into Bitcoin, Runner said but I dont think anyone really understands Bitcoin.

So far, no solutions have turned out to be viable.

For taxpayers, cash can be dangerous. Kimberly said she was constantly afraid of being robbed, and tried to avoid walking around with more than $20,000, the amount she feels her non-profit could lose without going out of business. She also said that shes had someone attempt to blackmail her, thinking she had ready access to cash.

One of the three men who escaped from a California jail last month had been charged with kidnapping a marijuana dispensary owner that they suspected had hidden large amounts of cash in the desert. The man and his accomplices are accused of driving the dispensary owner out to the desert, torturing him and cutting off his penis.