Canadas Lax Kwalaams show us how we can be saved: by loving the natural world and local living economies more than mere money and profit 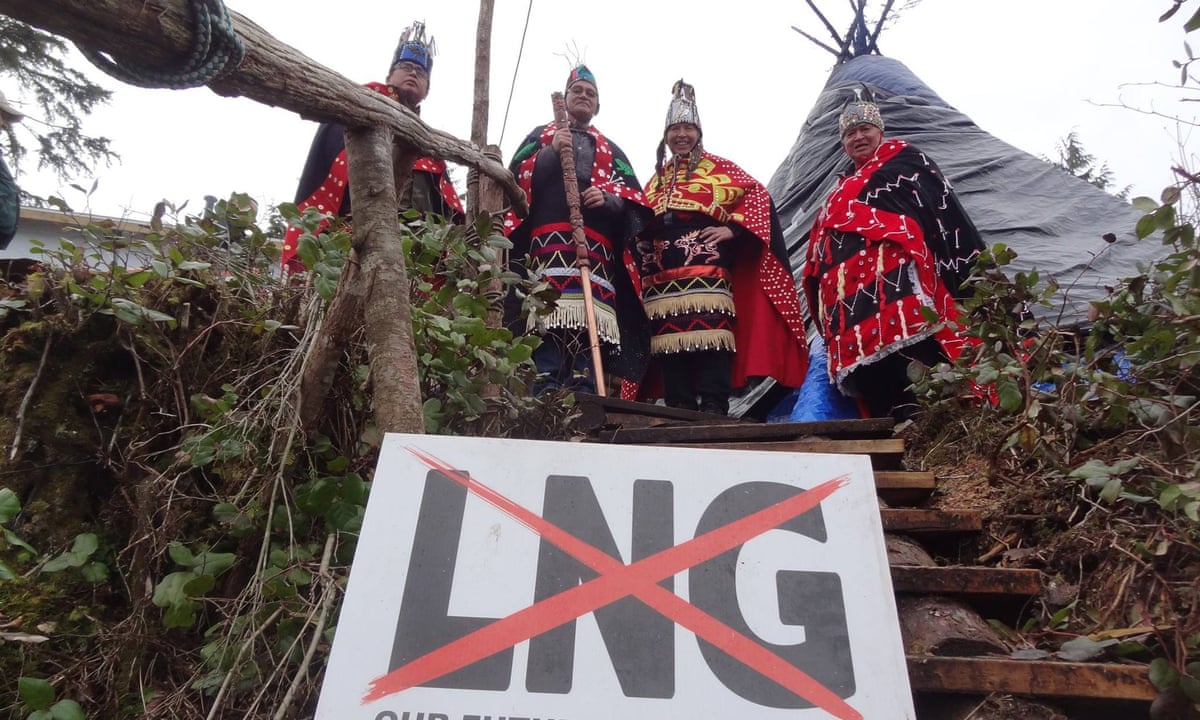 Everything has a price. Everyone can be bought. We assume this principle is endemic to modern life and that accepting it is most obvious to the impoverished. Except all over the world, people are defying it for a greater cause. That courage may be even more contagious.

It has been in full supply in north-west Canada, where an oil giant is aiming to construct one of countrys biggest fossil fuel developments: a pipeline to ship liquified natural gas (LNG) out of British Colombia. To export it overseas via tankers, Malaysian-owned Petronas must first win approval for a multi-billion dollar terminal on the coast.

That happens to be at the mouth of Canadas second-largest salmon river, on the traditional territory of the Lax Kwalaams First Nation. One of the worlds longest un-dammed rivers, the Skeena abounds in the fish relied on by surrounding wildlife and by First Nations and an entire regional economy.

Last year, following our modern principle, Petronas offered the First Nation an offer they imagined couldnt be refused: in exchange for their support, a whopping $1.15 billion in cash. But put to a vote, the Lax Kwalaams resoundingly said no every single community member.

When Petronas made the offer, Lax Kwalaams hereditary chief Yahaan says he believed the community poor and with few employment prospects might vote yes.

Opportunities like that dont come to your door every day, he says. But I give my people credit for taking that bold step. They showed their love and their passion for the land and water. No amount of money can compare to the richness of the river and what it gives us.

They knew something even a billion dollars couldnt persuade them to ignore: that you couldnt pick a worse place to transform into an industrial landscape. The proposed site for the LNG plant is smack in the middle of a unique estuary, a coastal Mecca for fish: where every year hundreds of millions of young salmon, having travelled down the river after birth, feed and nurture as part of their journey to adulthood.

When the British Columbia government gave Petronas a green-light anyway ignoring the unanimous no vote and the legal duty to consult all impacted First Nations Yahaan and community members sprung into action. In the summer of 2015 they set up camp on Lelu island, right in the path of Petronas at the mouth of the river. Monitoring the area on boats, they peacefully turned away workers from sensitive sites.

The camp, still up today, is a defence not just of wild salmon and aboriginal rights. Like many such outposts manned by Indigenous peoples across Canada, it is a defence of an entire worldview. On one side stands a government wedded to an extractivist mentality that is bent on carving up the province with tens of thousands of fracking wells. It promises an extravagant illusion of 100,000 jobs, which in truth amount to just a few thousand that will vanish as this resource boom, like all others, goes bust. And as Indigenous peoples rights have become more powerful, the government and its corporate partners have responded the way they know how: hiking the sums by which to buy them off.

On the other side, the salmon protectors, feeding tens of thousands and supporting a commercial and recreational economy crucial to British Columbians. Promoting an abundance of life instead of threatening to extinguish it. Taking care with the land so that it can take care of people. Getting by on what the earth can continually restore rather than depleting forever what lies beneath.

This is an Indigenous outlook, but one ever more people share. It is in sync with the knowledge that our energy sources must work not against natural cycles but with them harnessing the power of the sun, water and wind. This can provide jobs in far greater numbers than fossil fuels. And this is the kind of economy we need more of: regenerating naturally, creating enduring local benefits, existing in balance with the natural world. It is, in other words, everything a dirty energy economy is not.

The most dangerous imbalance of all that would be generated by this industrial project, Yahaan says, has only deepened the communitys opposition: its contribution to climate change. Far from clean, emissions from an LNG industry would shatter the provincial governments emission targets. The Petronas plant and its associated fracking alone could become the countrys largest carbon polluter.

All this means that the courageous resistance of this First Nation has put Prime Minister Justin Trudeaus climate plan on trial. The new Liberal government which will have final say on the project has raised enormous expectations. And raised those of First Nations: as Trudeau has said repeatedly, governments grant permits, but only communities grant permission. But as he has mouthed these words, he has pledged to build pipelines and fulfill ex-Prime Minister Stephen Harpers dream of getting fossil fuels to overseas markets. Trudeau can build LNG up, or bring down emissions: he cannot do both. Will it be on the shores of this beautiful, irreplaceable corner of the world that Trudeaus contradiction flounders?

The signs so far are not good. The federal government has said theyll give the same tax breaks to the LNG industry that Harper was prepared to. And on Friday they approved a smaller but controversial LNG project in southern British Columbia. And yet the government is feeling the heat of opposition: after tens of thousands of public comments criticizing the Petronas project, a decision that was to come down March 22 was delayed by Canadas Environment Minister and referred to cabinet.

It must have been a complete fluke for the forces of no that the results of a study assessing the project were published in Science, one of the worlds premier academic journals. Its conclusion? The LNG plant could lead to the collapse of BCs wild salmon run.

It must be another coincidence that the governments own scientific studies showed, already 40 years ago, that any development in this region could completely destroy the rivers complex ecosystem.

And still yet another coincidence that the governments current studies continue to point out the problems with an LNG industry: its emissions, in a worse case scenario, would be comparable to those from Albertas oilsands.

The provincial governments denigration has a different purpose: laying the grounds to marginalize and criminalize its Indigenous opposition. Yahaan says the RCMP who escorted Petronas workers regularly threatened community members patrolling in boats. They said they were watching us from land, air, and water. A police sergeant told me, we could have ripped anyone out of those boats, but we didnt want to make it seem like we were protecting the corporations.

In the face of this, support for the Lax Kwalaams has only been growing. In January, several neighbouring Indigenous nations, locals non-native groups and opposition politicians signed onto the Lelu Declaration, a powerful call from the First Nation to protect the area from industrial development and hold it in trust for generations to come.

Their stance is a challenge not just to Trudeau. It is a challenge to all those who choose to side with the extractive economy that offers security in the short-run but guarantees peril in the long-term. Last year, I sat in a meeting where activists from around the country debated how to propel us to the next economy. After a labour unionist pleaded for caution when it came to risking the jobs of the oil industry, an Indigenous leader named Arthur Manuel stood up. Look at the example of Lax Kwalaams, he said. We, the poorest communities in Canada, turn down money all the time. If this First Nation can find the courage to risk another way, what excuse do the rest of us have?

These Indigenous forces of no, derided by Christy Clark, ignored by Justin Trudeau, have taken to calling themselves by another name: the Forces of Know. They hold a few things certain, but one could not be more fundamental. It is that their approach, anchored in ancient knowledge and arched toward a habitable future, is how the world can be saved: by loving the natural world and living economies more than mere money and profit.