After the US presidents Jerusalem statement, tourist numbers to Christs birthplace have collapsed and violent protests have grown 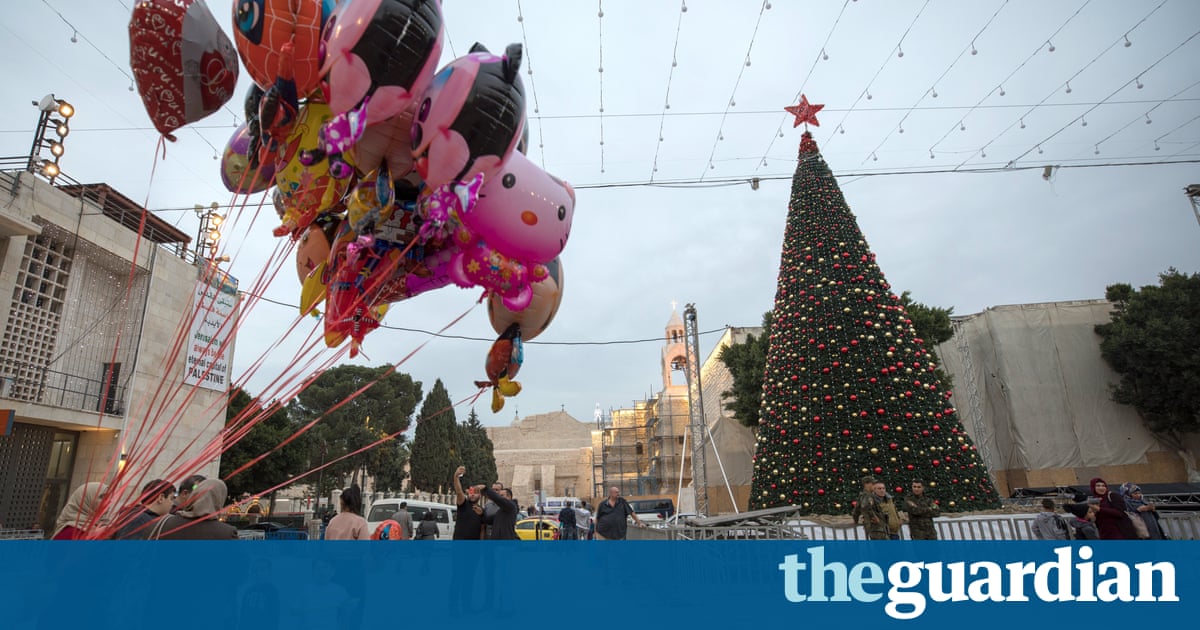 In Bethlehem’s Manger Square the huge nativity scene, donated by Malta, sits in pride of place under a grid of festive lights draped across the plaza. On Friday morning, a solitary hawker of Santa hats was touting his business, the only visible buyer a mother in a hijab who bought one for the toddler she was carrying in her arms.

Today – as every Christmas Eve – this square and the bulk of the ancient Church of the Nativity which sits on its periphery, will be lit up by television lights to allow images of Christmas in Bethlehem to be transmitted around the globe. But once again, say the West Bank city’s Palestinian residents – including the large Christian minority – it will be another gloomy holiday.

The reason will be evident from two large banners that the city’s municipality plans to hang in the square for today’s celebrations.

In a direct response to US President Donald Trump – who earlier this month broke with decades of international consensus to recognise neighbouring Jerusalem as the capital of Israel – the banners will state that Jerusalem is “always the eternal capital of Palestine”.

Bethlehem has already made its feeling clear about Trump and key figures in his administration. Following the US president’s 6 December announcement on Jerusalem, his avowedly Christian vice-president Mike Pence was “disinvited” from a festive visit by both Palestinian religious and political leaders, who made clear he was not welcome in the city.

In the fortnight or so since Trump’s announcement, nowhere in the occupied Palestinian Territories has been left untouched by his decision, even as the wider international community has united to denounce it. The United Nations general assembly voted overwhelmingly on Thursday to reject Trump’s move, ignoring the president’s threats to cut off aid to any country that went against him.

However, in the Holy Land, Christmas has lent an edge and poignancy to the fallout from Trump’s declaration. In speeches, both local and international, Palestinian figures – including President Mahmoud Abbas – have insisted on linking the symbolic way points in the Christian story – including Nazareth and Bethlehem – to the fate of Jerusalem.

Bethlehem and Jerusalem are the alpha and omega of the Christian narrative; the first the birthplace of Christ and the second the site of his crucifixion and resurrection. In Palestinian Christian society during the major festivals, the faithful have traditionally shuttled between the two. Before the construction of Israel’s separation wall, which sheared off Bethlehem from Jerusalem’s outskirts, Palestinian Christian life rotated around the two cities – and Jericho – which were seen as a series of key locations for the Christmas celebrations.

“The link between the two cities is traditional and historic,” explains Fadi Kattan, who runs a guesthouse and restaurant in the heart of Bethlehem’s Old City, just off Star Street.

“Before the second intifada [2000-2005], Jerusalem, especially Saladin Street, was where Palestinians from Bethlehem went to do their Christmas shopping. When I was a kid that’s where we went to buy our Christmas decorations and our ham. It is where the wealthier Bethlehem families went on Christmas Day, for lunch at the American Colony and National hotels.

“Our own family tradition,” adds Kattan, “was to have a lunch for around 100 people to welcome the arrival of the patriarch.”

Since those days, horizons have shrunk both physically and mentally. The separation wall has made travel between Palestinian areas far more difficult. Trump’s statement on Jerusalem, despite the defiance, has now hacked away at a more visceral emotional sense of belonging.

In his stone courtyard, where the potted trees are hung with Christmas decorations, Kattan speaks for Bethlehem’s hoteliers and gift-shop owners, as he describes how a good autumn tourist season fell off a cliff with Trump’s announcement and the demonstrations that followed. “We have two groups of tourists,” he says. “The domestic tourists [Israeli Arabs of Palestinian origin] from such places as Nazareth and Haifa and Akko, who come to celebrate. They have all cancelled. Foreign tourists had already booked their flights although longer term, people are cancelling.”

A short drive away, a stone’s throw from the separation wall, at a broad junction overlooked by the wall and a military watch tower, sporadic clashes with Israeli security forces have taken place since Trump’s announcement. On Friday, as on the previous two Fridays, youths gathered after prayers to burn tyres and throw stones outside the shuttered, luxury Jacir Palace hotel as Israeli troops replied with tear gas and sponge-tipped bullets.

It is these images, broadcast on the world’s media, that archbishop Pierbattista Pizzaballa, apostolic administrator of the Latin Patriarch of Jerusalem, said have been responsible for “dozens” of groups pulling out of planned visits after being scared off. “Of course this has created a tension around Jerusalem and this diverted attention from Christmas,” Pizzaballa added. “There are some tensions in Jerusalem, and in Bethlehem. This scared many people, so we’ve had fewer people than expected.”

He added that the heads of the Christian churches in Jerusalem would find it difficult to accept an official request by Pence to visit the city’s holy Christian sites in January, and called for him to “listen more” to other Christians.

Of all West Bank cities, Bethlehem has always been religiously the most diverse. On Friday, even as preparations continued for the Christian festival, Muslim worshippers filled Manger Square for Friday prayers – a place where the call to mosque is rivalled by the sound of bells.

In his shop, next to his olive wood carving factory near the Milk Grotto, Jack Giacaman lamented this year’s sharp drop-off in tourist numbers, but said the feeling of being let down was a familiar one.

“Unfortunately, every year it is the same result but with a different story. This time it is Trump. The only thing we don’t know is the real impact or how long it will last. It was looking like a very good season. In October and November we were seeing 10,000 to 11,000 visitors a day. Then Trump made his announcement and it dropped off very quickly.

“Trying to cancel our existence and our connection with the city is very dangerous because it is mixing religion with politics.”

Like many Palestinians this Christmas, Giacaman is feeling very weary. “Palestinians are tired. It is clear since the second intifada that the Oslo peace accords have been a failure and we should dissolve the Palestinian Authority. Since the beginning it has always been clear that the United States has been on the side of Israel.

“All Trump has done is put that on table in plain sight rather than under the table. Nothing has changed apart from that. And we, as Christian Palestinians, have been victims of these policies for years.”