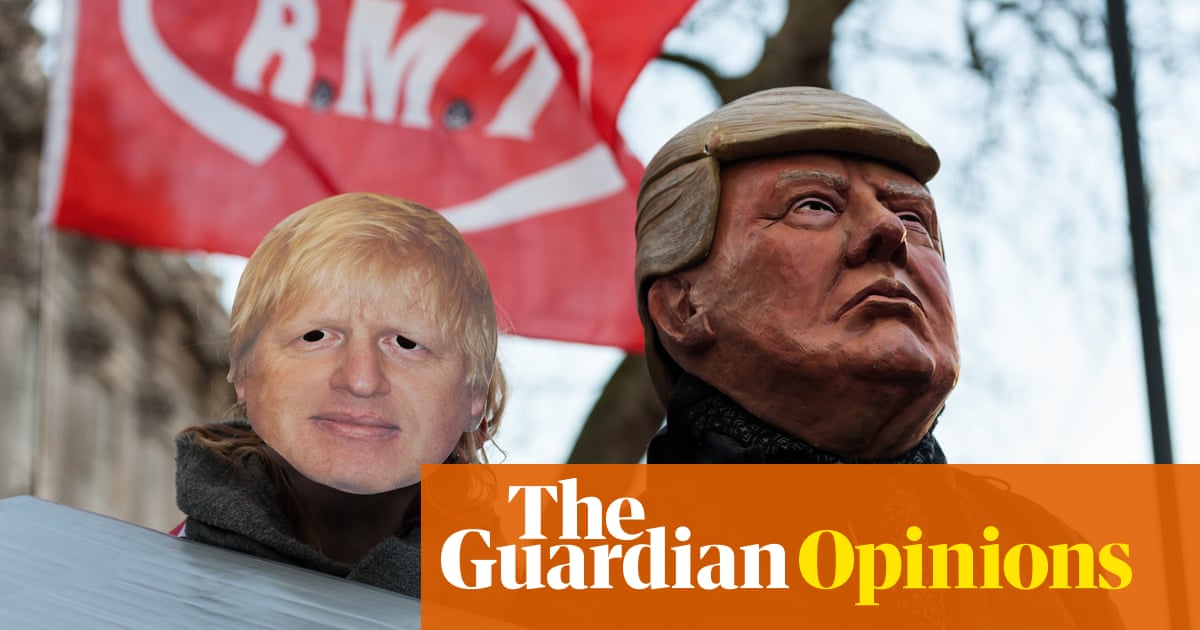 As has been widely reported, if the Conservatives win the British election, a potential trade deal with the United States could put vital parts of the NHS at risk of privatization. “I think everything with the trade deal is on the table,” Donald Trump has remarked. “NHS or anything else … everything will be on the table, absolutely.”

Those of us across the pond are horrified on the UK’s behalf. Don’t let Trump and his cronies carve up the NHS. Vote and fight as if your life depends on it – because it does.

A jaw-dropping 34m Americans say a friend or family member died because they were unable to afford medical treatment. That’s what it means for the health services to be “on the table”.

Given the high stakes, it’s no wonder my social media feeds have been dominated by videos informing British voters of the horrors of US healthcare and the superiority of the British model. In one, which has chalked up over 20 million views, Londoners are stunned by the cost of routine procedures such as giving birth in a hospital. Their jaws drop when they hear the extortionate rates charged for prescription drugs. “So if you’re poor, you die?” a young woman asks incredulously. The answer, too often, is yes.

I spent a few hours this week recruiting subjects for a contribution to this budding don’t-follow-our-example video genre. My sister Nye Taylor directed a short video in partnership with the non-profit Democracy Collaborative. The title: “A Warning From Americans.”

The stories we collected were gut-wrenching. One woman’s 22-year-old daughter died because the hospital turned her away for lack of insurance, despite the fact that her massively swollen leg was a sign of a deadly blood clot. Another woman spoke of her 45-year-old sister, long diagnosed with type one diabetes and rheumatoid arthritis, who ended her own life less than a month ago, in part due to her stress over constant negotiations with insurance companies that delayed or denied access to essential treatment.

And those are just the interviews that made it on screen. When we were recruiting, my inbox overflowed with unbearable tales of woe. One woman told of tens of thousands of dollars in medical bills that accumulated as the result of sexual assault. A devastated nephew wrote of an uncle who died by suicide after a cancer diagnosis so he wouldn’t be a financial burden on his family. A young man confessed to going 15 years without seeing a doctor because he couldn’t afford a visit. A woman said her partner had to pay $5,000 for some tests and an MRI, despite having “gold standard” insurance. And so on.

In the end, the story that struck me the most was, in many ways, the least sensational. It stood out because it underscores what is perhaps the biggest threat posed by the prospect of a decimated NHS – the way it would limit people’s freedom, including the freedom to challenge powerful interests. The potential privatization of British healthcare is not only a grab for profit, it is also a grab for power.

In the video, Ann Larson recounts how she once had health insurance through her spouse, who was on the faculty at Long Island University. In 2016, the faculty were trying to negotiate a new contract with better terms. In response, the administrators cut off their health insurance.

“What that meant was that people had to give in,” Larson explains. “People were worried about rationing their medication. People with children were worried about how they were going to care for their families.” As Larson tells it, people who may otherwise have been ready to battle together for better working conditions had to give in. The university’s ability to terminate insurance was an overpowering source of leverage, one that hit people who were ill or who had ill family members the hardest.

This is part of the deeper pathology of the American for-profit healthcare model. It gives bosses a tremendous advantage, since millions of people get medical coverage through their employers. It limits people’s life options, binding them to jobs they literally can’t live without.

Do you dislike your degrading boss or the mandatory overtime? Do you dream of taking time off to pursue your passion for art or activism, or do you want to start a business? Too bad, because if you stand up for yourself or quit to follow your dreams you will be uninsured, and if there’s an emergency you will wind up ill and destitute. Want to divorce your partner? Best you reconsider, because you only have coverage through their job, and that coverage might mean the difference between life and death if you have a chronic condition.

This sort of dependence is incredibly disempowering, and that’s precisely the point. Coming after four decades of neoliberal attacks on working people – the weakening of trade unions, the rise of zero-hour contracts, and the privatization of well-unionized public services – gutting public healthcare would be catastrophic. No surprise, then, that the Labour party, with its historic emphasis on workers’ rights, is the most committed to defending and expanding the NHS.

Of course, we mustn’t forget that privatization is about profit. As Bernie Sanders frequently points out, the American healthcare industry raked in over $100bn in profits last year, which is why industry CEOs are salivating at the money that could be ruthlessly extracted from the British system. In response, we must emphasize the obscenity of their desire. It’s immoral to profit from pain, to price-gouge patients who cannot survive without insulin and EpiPens, or to jack up the costs of routine hospital stays and doctor visits.

But we also must not forget that plutocrats aren’t only after wealth; they also want control. For-profit medical coverage is a form of domination. It puts regular people in a precarious position, and the result has devastating implications for any country that calls itself a democracy.

In America, the stress of paying for and managing healthcare in our expensive, inefficient, and incredibly confusing system leaves people demoralized and desperate. We work hard to pay for our insurance premiums, only to spend untold hours haggling with our insurers over the terms of coverage. Too often, an illness kicks off a downward spiral. Being sick means you can’t work, so you lose your job; then you lose your insurance; then medical debts pile up; then you declare bankruptcy; next thing you know, you have lost your house. The inequity is obvious: the rich buy quality care, while the less affluent suffer, go bankrupt, or die.

“Because we’ve allowed, in this country, greed to reign, this is what’s happening to us. Do not let that happen in the UK,” James Fauntleroy says in the Democracy Collaborative video. As someone who needs three sessions of kidney dialysis a week to stay alive, he supports the Bernie Sanders wing of the Democratic party and is cheering Labour from afar.

His warning was clear: “Don’t let [Trump] get his hands on your national healthcare system, because if he does, he’ll do exactly what he did to this nation. Mess it up.”