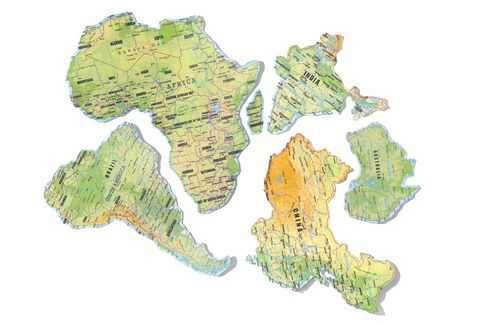 Globalizationthat irresistible force that was inevitably, inexorably making the world flatlooks to be in retreat. Trade growth has never recovered to the levels reached before the 2008 financial crisis. Donald Trump is fueling his presidential campaign on fear of free trade and immigration. The economic problems of the U.S., he blasted in a June speech, are the consequence of a leadership class that worships globalism over Americanism. Then came Brexit, the worst setback for the European Union, that most ambitious experiment in globalization. Money manager Bill Gross said Brexit marks the end of globalization as weve known it.

In a sense, Gross is correct. The rich West launched globalization on the ideal that nations tied together by bonds of trade, money, and culture are less likely to destroy one another. Now those in the U.S. and Europe who believe themselves hurt by the massive changes wrought by globalization want to reverse it. Isolationism is being heralded as independence.

But anyone who thinks globalization is dead misreads whats really happening. While there are pockets of resistance, much of the world is still forging tighter links between countries, companies, and communities. Rather than retrenching, globalization is deepening and expandingwhether angry Trump supporters or British Leave voters like it or not.

This new and perhaps even more exciting phase of globalization presents serious challenges for policymakers, especially in the U.S. and Europe. As working classessuffering from stagnant incomes and joblessnesslash out at the free movement of money, goods, and people, their elected politicians face pressure to detach from an increasingly interconnected world. In doing so, though, they may cede to non-Western competitors the potential benefits these fresh linkages will create. The fate of nations may depend on whether they continue to embrace globalization.

Thats been the case for decades. The first round of globalization was, generally, a movement from the West to the rest. As the open exchange encouraged by the U.S.-led global economic system and advancing technology smoothed the way for doing business on an international scale, finance and factories flowed from the richest countries to the poorest. With them came Western doctrines (from capitalism to evangelical Christianity) and Western culture (from McDonalds to Mickey Mouse). The countries that took advantageChina, Japan, South Korea, and, yes, the U.S.reaped the rewards. Developing countries alleviated poverty on an unprecedented scale, while advanced nations gained greater economic efficiency. Countries that sat on the sidelinesRussia, much of the Middle East, and Africaare still trying to make up lost ground.

The success of that early phase of globalization has spawned anotherone that moves in all directions. Emerging economies are knitting closer ties among themselves as China, India, and others gain in wealth, clout, and confidence. The World Trade Organization figures that 52 percent of developing countries exports went to other emerging economies in 2014, up from 38 percent in 1995. Trade between China and India was $1.7 billion in 1997. By 2014 it had ballooned to $72 billion. Indias total trade with Africa grew more than 60 percent in only four years, to almost $48 billion in the countrys 2014-15 fiscal year.

Most of the world continues to pursue free trade, even as Trump derides the North American Free Trade Agreement, or Nafta, as a disaster, and Brexit excises Europes second-largest economy from the continents integrated market. China is pushing for a pan-Asia free-trade zone; the 10-member Association of Southeast Asian Nations is forming a common market; and African countries have started negotiating a continentwide free-trade area.

Todays globalization is also drawing in countries previously left out. Textile and apparel manufacturers from Bangladesh, China, and Turkey invested $2.2 billion in Ethiopia last year to open factories to export to the U.S. and Europe. The Philippines, long a laggard in a region replete with hyperconnected economies, has become a major hub for call centers.

New institutions are forming to support these trends. In June the China-backed Asian Infrastructure Investment Bank, a development organization akin to the World Bank, approved its first four loans, totaling $509 million, for projects in Bangladesh, Indonesia, Pakistan, and Tajikistan. Two months earlier, the New Development Bankfounded by Brazil, Russia, India, China, and South Africa, and headquartered in Shanghaiannounced its first loans. They totaled $811 million and will fund renewable energy projects in the BRICS countries, except for Russia.

Companies from the emerging world are becoming more important investors as well. According to the American Enterprise Institute, Chinese companies invested $111 billion around the world in 2015more than 10 times the amount in 2005. The total that Indian companies have invested abroad, at $139 billion in 2015, rose 43 percent in only five years, growing faster than the amount of foreign money invested in India. During a June visit to China, Russian President Vladimir Putin said the two countries are jointly undertaking investment projects worth $50 billion.

Growing antipathy toward immigrants hasnt kept people at home, either. The World Bank estimates that the number of international migrants rose to a record 251 million last year. More than 38 percent of them moved from a developing country to another developing country in 2013, compared with 34 percent to advanced economies.

Of course, this new globalization may encounter its share of Brexit-like setbacks. Trade among emerging economies hasnt escaped the global slowdown. The WTO estimates that the growth of exports among developing economies slumped to 1.3 percent in 2014, down sharply from about 33 percent only four years earlier. In some cases, the ties between nations are tightening less than they appear. Despite the high-level friendship between China and Russia, persistent distrust has kept many of their promises of cooperation just thatpromises. And politicians and policymakers intent on turning back globalism can hamper progress for everyone. Trumps protectionism, if ever implemented, could spark retaliatory measures capable of dragging down global growth. In Europe, German Chancellor Angela Merkel is talking tough on Brexit, saying the U.K. cannot go cherry-picking what it wants and doesnt from EU membership. The trauma of the U.K.s impending exit is expected to dampen growth not only in Europe, but possibly around the world.

Yet the foes of globalization wont be able to stop it. Too many countries see their future as part of something bigger. India long harbored doubts about participating in globalization, but after liberalizing rules on foreign direct investment in June, Prime Minister Narendra Modis office tweeted that his country is the most open economy in the world for FDI. Next door in Myanmar, military rulers gave in to democratic reform after realizing their impoverished country could no longer remain isolated. They hope to gain from the opportunities embedded in this latest round of globalizationnew sources of growth, finance, and profits; new founts of information and innovation; new job creators and consumers; and new ideas sprouting in a newly emerging global culture.

Those who blame globalization for their problems think theyll be better off watching from the sidelines. Trump and his supporters contend that erecting wallsliterally and figurativelywill protect U.S. jobs and industry from an unfair global economy. But early indications say otherwise. The pounds steep post-Brexit swoon is a signal that investors believe the U.K. is less competitive outside an integrated Europe than within it. In Paris and Frankfurt, bankers and politicians are eager to capitalize on Brexit to siphon off financial business from London.

Instead of pandering to isolationist forces, politicians would do better to address their very real concerns directly. Workers displaced by free trade need more intensive training to prepare them for new jobs. University education must become less expensive, and vocational schools more available. Allowing labor a greater voice in corporate management will help wage earners share more equitably in the profits globalization creates for Big Business. As the world continues to flatten, opponents of that inevitable, inexorable change must mind the edge.