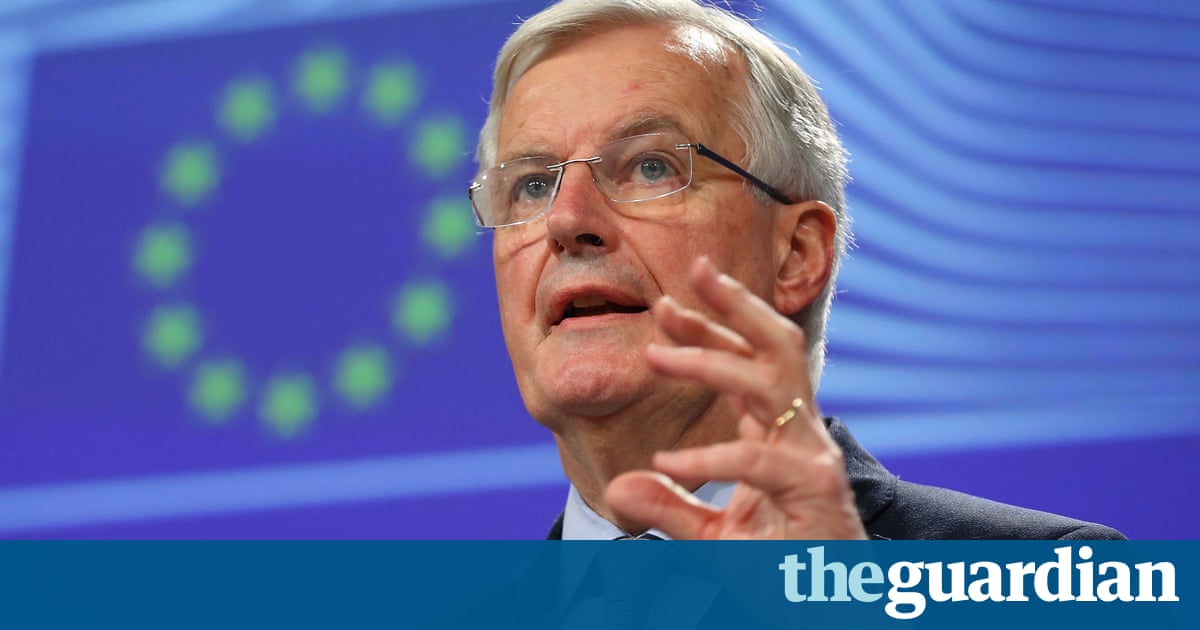 The UK’s transition out of the EU should be complete by 31 December 2020, the EU’s chief negotiator has said as he outlined plans for the next phase of Brexit talks.

Michel Barnier, who is negotiating Brexit on behalf of the other 27 member states, said it would be logical for the transition to end then because that was the last day of the EU’s current seven-year budget.

“The transition period is useful and it will enable the public administration in Britain to get prepared for the challenges they have to face,” Barnier told reporters in Brussels on Wednesday.

Theresa May has called for a two-year transition and agreed that the UK will continue to make annual payments into the EU budget until 2021.

Barnier confirmed that during the transition the UK would have to apply all EU laws, including new ones agreed after 2019, without any input from British ministers or MEPs. Under the EU’s take-it-or-leave-it offer on transition, the UK would be subject to the enforcement powers of the European commission, EU agencies and the European court of justice.

Gibraltar would not automatically be part of the transition, as the UK would have to reach a separate bilateral agreement with Spain. Barnier confirmed that Spain had an effective veto on the future of the British overseas territory.

In theory the UK’s withdrawal agreement only needs the approval of a weighted majority of EU member states; in practice, all Brexit decisions, so far, have been taken unanimously.

The question mark over Gibraltar’s place in the transition has angered the British government, which argues Brussels is being inconsistent and contradictory over the territory that Spain and the UK have been arguing over for centuries.

Draft negotiating documents published by the European commission on Wednesday showed that during the transition the UK “could be invited to attend” technical committees and expert groups, when the issues under discussion concerned Britain. But voting rights have been ruled out.

The EU wants “specific procedural arrangements” on fish quotas. Barnier said British ministers would be excluded from the councils setting annual catch quotas: “When there are discussions, such as [those] establishing the fish quotas, after the UK’s departure, they will no longer be part of the councils.”

In a blunt message to the British government, the EU negotiator stressed that the only way to secure the transition deal was to agree the complete withdrawal agreement, including citizens’ rights, the financial settlement and the Irish border. “If we don’t have an orderly withdrawal, then there won’t be a transition period.”

He restated his position that the UK should not expect a special deal on financial services – a view he outlined in an interview earlier this week with the Guardian and other European newspapers.

Barnier said the UK’s red lines – rejection of the European court of justice and free movement of people – meant the logical choice was a free-trade agreement in the style of accords struck with Canada, South Korea and Japan. Each agreement was tailor-made to the country, but was underpinned by the same logic, he said.

He dismissed suggestions he had been ready to negotiate a deal on financial services with the US when he was the EU commissioner responsible for regulating banks.

He said the EU had considered “developing cooperation” with the US through the G20 to ensure a level playing field, but “as far as I am aware there is no free trade agreement that would allow privileged access for financial services”.

The EU negotiator also noted Britain would drop out of 750 international agreements on Brexit day on 29 March 2019. These go far beyond the EU’s 34 trade deals covering 60 countries, which Barnier said would have to be renegotiated by the UK.

In a dig at Brexiters hoping to reduce “red tape”, Barnier said: “It is always useful to remember that when we talk about the red tape in Brussels this means, for the 28 member states, that they don’t need to have that bureaucracy.”

Barnier will now send his draft negotiating guidelines to national capitals, which will sign off the document.

The EU will adopt its official position on future relations with the UK in March 2018, with the aim of agreeing a political declaration on trade and the withdrawal treaty by October 2018. The treaty will go to the European parliament for approval before Brexit day.

The EU’s strict timetable underscores the stakes for the British parliament, after MPs voted last week for a “meaningful vote” on the final deal. Any attempts to re-open the deal after October 2018 could run into difficulty.

Asked whether the British government could return to the negotiating deal after October 2018, Barnier said: “I think that we have to build trust for the right conditions to be in place for ratification and not wait until the end of this process.”