Austerity does not come naturally to Brazilians, but attitudes are changing as economy suffers what is forecast to be the deepest crisis in more than a century 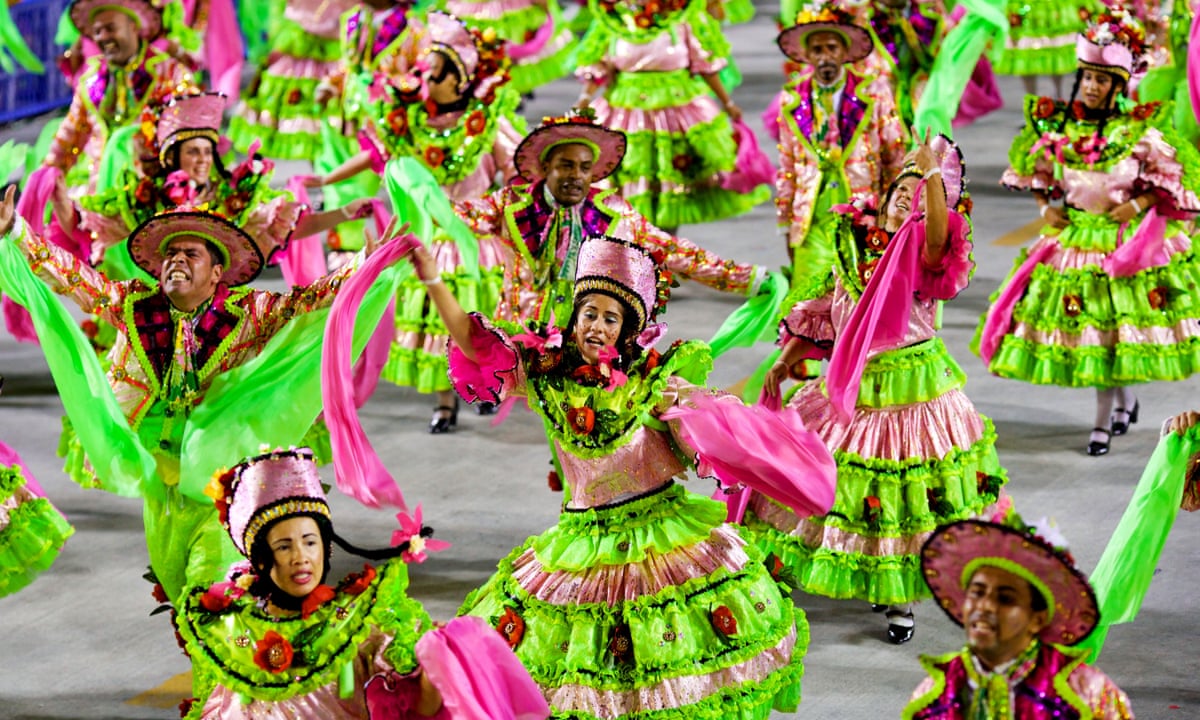 When it comes to mood making in Brazil, there are few institutions that can match the samba schools of Rio de Janeiro.

For a week each year at Carnival, they embody exuberance with a pulsating parade of spectacular floats, gyrating dancers and bateria throbbing with the rhythms of tamborims, chocalhos, surdos and drums.

But even these professionally upbeat performers are wondering how long the party can last as the countrys economy suffers what is forecast to be the deepest recession in more than a century.

Just like businesses and consumers across South Americas most populous nation, some schools are having to trim their costs ahead of next months show at the Sambódromo.

Compared to last year, the Mangueira school, for example, will have six instead of seven floats and 4,000 instead of 5,000 dancers and musicians. Velvet has been replaced by cheaper fabrics. Another school, Beija Flor, is renegotiating contracts.

Mangueiras director Junior Schall blamed the austerity on old unpaid debts and new financial strangulation caused by falling sponsorship and local government funding that has yet to materialise.

This year will probably be OK, he said, but in the future all 12 of the main samba schools are reconsidering how they do business.

The general consensus is that in the coming five to 10 years, well have to rethink Carnival in Rio, because of the financial strangulation. Its hard now, but it might become unviable in the near future, he warned in a break from a rehearsal at the Cidade do Samba.

Austerity does not come naturally to carnival lovers, but attitudes are having to change now that Brazils economic fortunes have turned upside down.

Until recently, it seemed the country could do no wrong. Thanks to a global commodity boom, strong demand from China and the discovery of huge offshore oil reserves, the economy surged forward at an annual average of 4.5% between 2002 and 2011.

Today, however, it seems nothing can go right. Prices of oil, iron-ore and soya have plunged, China is slowing down and Brazils policymakers are too absorbed in political battles and bribery investigations to focus effectively on the countermeasures.

Decision making has been paralysed for much of the past year by a cascade of calamities: the countrys biggest corruption scandal, its worst environmental disaster, and an impeachment battle against the president.

Any one of them would rock a country in a normal year. Combined, they have crippled business and consumer confidence.

After shrinking by 3.71% last year, GDP is predicted to decline by a further 2.95% in 2015. The last time Brazil experienced such a deep slump was in 1901, when soldiers were still fighting the last Indian War and aviator Santos Dumont was making a name for himself by flying around the Eiffel Tower in a dirigible.

Analysts are struggling to keep up with the speed of the deterioration. For 13 weeks in a row, the 100 or so private sector financial institutions surveyed in the the Central Banks Boletin Focus survey have been forced to lower their forecasts for Brazils economy. Yet reality continues to outstrip their pessimism.

The list of woes makes for spectacularly grim reading: As well as the deepest, this is forecast to be the most prolonged decline since the Great Depression of the 1930s. In December, consumer sentiment as measured by the Getulio Vargas Foundation in December reached a record low. The main stock index Ibovespa has fallen to a point not seen in six years and inflation is rising faster than at any time in 12 years, reaching 10.67% in 2015.

Foreign exchange markets have reflected the decline. In 2015, the real depreciated more than any other major currency, pushing up the price of imports.

The samba schools are feeling the consequences. Its especially difficult because 60% of the materials we use come from abroad, and have their prices quoted in dollars, Schall of Mangueira complained.

Sponsorship is also harder to come by. Almost every major company is in retreat, as customers cut spending, investigators probe financial records and investors are scared away by ratings companies. More than 200 corporate downgrades last year have left most big firms either in junk territory or teetering on the brink.

The countrys three largest revenue earners which, until recently, were among the most valuable corporations in the world have been knocked sideways.

Petrobras, which accounts for 10% of Brazils fixed investment and 80,000 jobs, has been hammered by the fall in oil prices and the ongoing Lava Jato corruption investigation. Stuck with the unenviable title of the worlds most indebted company, it has had to slash spending, which has had a dire impact on employment, as well as spending on cultural events like Carnival.

Vale, the worlds biggest iron-ore producer, has not only suffered from plunging commodity prices, it was also hammered by the collapse of a tailings dam in November at one of its mines in Minas Gerais that discharged 50m cubic metres tons of toxic sludge into the River Doce. The accident, which was described as Brazils worst environmental disaster by one cabinet minister, could cost the company and its partner BHP Billiton billions, not just for the clean-up and compensation, but to strengthen evidently inadequate safety standards.

Completing the calamitous trio is Odebrecht, the construction giant behind the Maracanã World Cup stadium, Olympic venues and building projects across the globe. An employer of 140,000 people, it is one of the mainstays of the Brazilian economy, but its ability to do business has been hamstrung by allegations of corruption, the jailing of its chief executive Marcelo Odebrecht and a freeze on new contracts from Petrobras and the government.

The public purse is being tightened. Carnival organisers say they have yet to receive a single centavo from the local government despite promises of funding. Its always the cultural budget that gets cut first, Schall says. More painfully, spending on healthcare and education have also been slashed.

But the public deficit has continued to rise because tax revenues have fallen and higher interest rates have increased the governments borrowing costs. Congress could allow other austerity measures, but but the two main political camps are half-hearted about what needs to be done. The ruling Workers Party has reluctantly attempted to cut costs but doesnt have the stomach for it, while the centre-right opposition has put its ideologically budget-balancing instincts aside in order to make the government to suffer.

This has left Brazil floating in a limbo of no stimulus and no retrenchment. Unable to accept this drift, finance minister Joaquim Levy resigned in December after failing to win support for his fiscal adjustment measures.

This has further rattled the markets as his replacement Nelson Barbosa is less of a fiscal disciplinarian. In the expectation of a widening deficit, Fitch and Standard and Poor have classified Brazils sovereign debt as junk. Moodys is also considering a downgrade.

There is no immediate risk of a default. During the good years, Brazil paid off its debts and built up $370m in foreign exchange reserves. This should prevent a repeat of the panic and hyperinflation of the 1980s and 1990s. The impact on the public has also been mollified by ring-fenced welfare benefits and levels of employment that are still relatively high despite a near doubling of the jobless rate at one point last year.

Adriano Pires, director of the Centro Brasileiro de Infra Estrutura, says the population has yet to feel the full impact of the current recession, but this will change over the next three months as taxes, school fees and Christmas debts come due. The entire economy faces a similar reckoning.

Brazil is paying the price for the past. The bill is arriving, he says, concluding the economic problems cannot be resolved until the political crisis runs its course.

Other analysts stress it is not enough to blame Brazils woes on a loss of demand from Asia because other raw-material exporters, such as Indonesia, Chile and Peru have weathered the storm far better.

Brazil probably did the worst job of any major commodity producing country in putting the boom to good use, and especially under Dilma its macro policies were simply atrocious, says Arthur Kroeber, managing director of GaveKal Dragonomics, who says Brazil needs to demolish its labyrinth of taxes and regulation and invest more in infrastructure and education.

Nobody is predicting a recovery any time soon.

The outlook for 2016 is very bad, says Naercio Menezes Filho, an economics professor at the Insper business school. In 2016, we will see the impact on jobs spread to the commerce and service sectors, where people are less qualified and poorer….There will be a lot of private suffering.

For the moment that is not evident on the streets of Rio. Recent anti-government protests have mostly been middle class and diminishing in size.

But there is a sense of gloom that will take some lifting. Carnival may help. Despite the modest budget trimming, organisers promise next months spectacle at the Sambódromo will be more vibrant than ever.

The idea isnt to diminish carnival, but to carry out a great spectacle within the budget that will be even more dynamic, Schall says.

If the government and Congress could be as convincing about making more from less, Brazil could face the future with a lot more confidence. But that would require some unpopular decisions and for the moment nobody is willing to rain on the parade.