The US presidents name, in more than 100 punning guises, was widely used by very young writers in entries to BBC Radio 2s 500 Words story contest 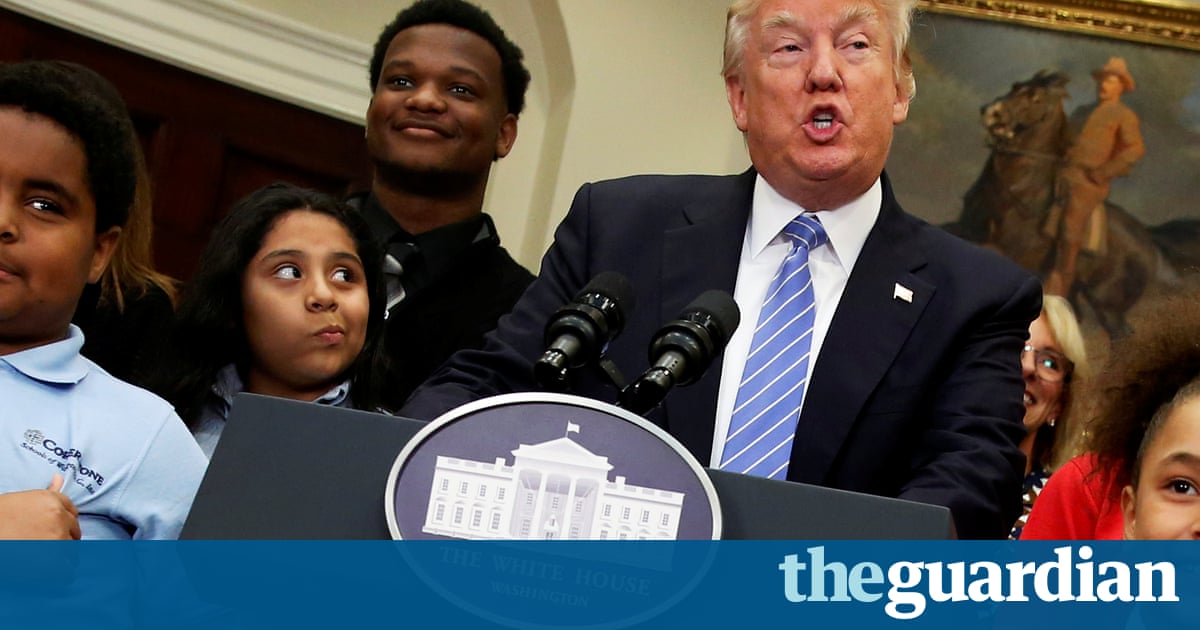 Trump, a word that has inspired sniggers in generations of British children, has provided inspiration for more than fart jokes in a nationwide childrens story writing competition. The beleaguered US president Donald Trumps name emerged as the chief inspiration for stories of monsters, aliens and dodgy politicians written by children entering BBC Radio 2s annual 500 Words award.

An analysis of entries for the competition, which was launched the week the new incumbent of the White House took office, found that mention of his name had increased by more than 800% compared with 2016. The young authors, aged five to 13, dreamed up more than 100 Trump-related words, from Trumplestiltskin to Boggle Trump.

The analysis of the 131,000 entries was conducted by the Oxford University Press, which found that as well as mentioning Trump in the context of the US elections and politics, he was also found in stories of space aliens and superheroes. The research found that political words were a significant area of growth, with Brexit, fake news and article 50 also surfacing in schoolchildrens stories.

According to the Financial Times, a dystopian future in which the US president limits all communication to 140-word characters or less was imagined by one 12-year-old boy. In a piece entitled Stories, the boy wrote: Personal interactions were banned, along with newspapers and books. Nowadays you were only allowed to communicate through tweeting alternative facts.

Trump is the latest word of the year to emerge from the competition, which was launched in 2011 by presenter Chris Evans. Refugees was the word of 2016 and hashtag# the word of 2015. As well as the political preoccupations of the nations children, 500 words also provides parents with a snapshot of their thinking about social media: this year Instagram overtook Facebook and Snapchat, though YouTube remains out in front.

Other trends noted in the analysis were bottle flip and fidget spinner, the three-legged spinning top that has become this summers playground essential. The competition is run in conjunction with librarians and schoolteachers, 5,000 of whom volunteer to read the entries before they are narrowed down to a 50-strong longlist judged by a panel that includes the Horrid Henry creator Francesca Simon, the performer and childrens author Charlie Higson and Frank Cottrell Boyce. The winners will be announced on Friday.

Although the US president has inspired the latest use of Trump by a generation of schoolchildren, it is a word with long history, little of it flattering. Aside from its informal use, the word also describes a simple popular 16th-century English card game in which the aim was to take as much money off your opponents as possible. The word is widely used in many other card games and also appears as the name for a suit in the tarot deck. The children who entered the competition did not, however, only use the presidents surname in the newest sense, the organisers said: Of course, with a word like Trump, our youngsters were not shy to use it for comic effect, referencing its more informal sense of passing wind.