Bill Clinton slams ObamaCare but Bill is trying to avoid muddling his message again as he campaigns for his wife in battleground Ohio a day after he described President Barack Obama’s signature health care law as “the craziest thing in the world.”

This time, Bill Clinton only briefly mentioned health care as he spoke for 45 minutes Tuesday at Ohio University. The former president lamented that too many Americans “can’t get affordable health insurance premiums in a lot of places” if they don’t work for large companies, and he said his wife offers solutions.

It was a far cry from his remarks Monday in Flint, Michigan.

“You’ve got this crazy system where all the sudden 25 million more people have health care and then the people are out there busting it, sometimes 60 hours a week, wind up with their premiums doubled and their coverage cut in half,” Bill Clinton said then. “It’s the craziest thing in the world.” 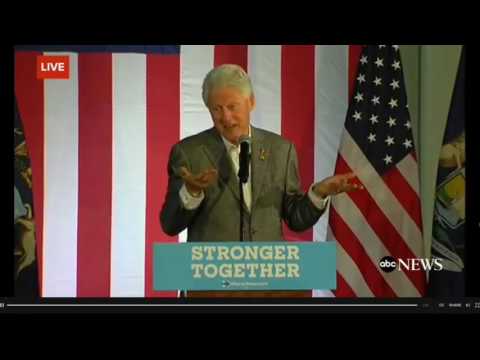 The former president made no reference most of the day Tuesday to those earlier statements, even as they continued to reverberate, prompting responses from the White House and his wife’s top aides. But late Tuesday evening, he reiterated his support for President Obama’s signature law.

“I want to say this one thing about the healthcare law, because that’s another thing they’ve been trying to tangle in — I supported the Affordable Care Act. I support it today,” Bill Clinton said while campaigning for his wife in Steubenville, Ohio on Tuesday.

“It did a great job in ensuring 25 million more people, and it did something for 100 percent of the people, it says you cannot deny anybody health insurance because of a pre-existing condition,” he added.

Separately on Tuesday, Bill Clinton also sidestepped reporters’ questions about Trump bringing up his marital infidelity.
“He’s been making those attacks from the beginning of this campaign, so I don’t think that’s anything new,” Clinton said in Marietta, Ohio.

His relationship with a White House intern was the subject of his 1998 impeachment. Bill Clinton did not respond to specific questions about Trump’s recent suggestion that Hillary Clinton also was not “loyal” to her husband.

Seemingly aware that he should avoid fanning the flames, Bill Clinton told reporters, “My job is very limited: I’m supposed to tell people why she’s the best choice to be president.”

The exchanges are the latest reminder that the 42nd president is both a tremendous asset and a wild card for his wife’s candidacy.

He draws enthusiastic crowds eager to a see a former president who is anything but a normal political spouse, but he’s also generated unwanted stories, including this summer when he approached Attorney General Loretta Lynch for a private meeting at an airport. The meeting was days before the FBI announced that it would not recommend any charges against Hillary Clinton related to her use of a private email server while she served as Obama’s secretary of state.

John Podesta, Hillary Clinton’s campaign chairman, tried to tamp down any controversy over his health-care riff. “We need to fix the problems, and I think that’s what President Clinton was referring to,” Podesta said.

At the White House, Obama spokesman Josh Earnest said it was not “exactly clear what argument” Bill Clinton was making in Michigan. Earnest said Obama still has “strong confidence” in the law, and he cited subsidies that still allow “the vast majority” of shoppers in the individual policy market to find affordable coverage.

“President Obama has of course acknowledged that with cooperation from Democrats and Republicans in Congress, there are some things that could be done to further strengthen the law,” Earnest said, “and you know, that’s something that Secretary Clinton has vowed to pursue if she is elected president of the United States, and President Obama is certainly going to do everything he can to support that effort.”

In Ohio, Bill Clinton deflected a heckler early in his remarks. As he began to speak, a man yelled at the former president for signing a 1994 crime law that included stiffer sentences for many federal crimes. Clinton told the man “Hillary didn’t vote for the crime bill,” but noted “Senator Sanders” did, referring to Vermont Sen. Bernie Sanders, who challenged Hillary Clinton for the Democratic nomination.

Clinton’s overall remarks focused on why Hillary Clinton would be better for the economy than Trump, who Bill Clinton described as playing on working class voters’ economic frustrations with lies and empty promises.

Rocking the vote: US politicians and their musical side projects

Hillary: The Movie – what lessons does it have for David Bossie and Trump?

Rep. who asks Hillary about Bill’s past labeled a ‘heckler’ and ‘disrupter’ [video]

Forget Trump. House of Cards Is How the Far-Right Sees the Clintons.