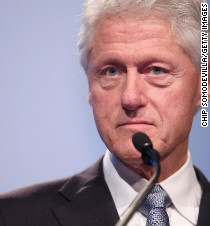 Washington (CNN)Bill Clinton joked Friday that Bernie Sanders’ supporters would “shoot every third person on Wall Street” if given the chance, a riff on his broader defense of Hillary Clinton’s economic record.

“One of the few things I really haven’t enjoyed about this primary: I think it’s fine that all these young students have been so enthusiastic for her opponent and (he) sounds so good: ‘Just shoot every third person on Wall Street and everything will be fine,'” Clinton said at an event in Fort Washington, New York. He pointed to fewer people working on Wall Street since the Dodd-Frank Act was passed as proof that financial reforms that his wife supports are effective.
He then added, “The inequality problem is rooted in the shareholder-first mentality and the absence of training for the jobs of tomorrow,” he explained, as he elaborated on her support for Dodd-Frank.
Speaking to MSNBC shortly after the event, Bill Clinton insisted his comments were “a total joke.”
“It’s a joke. It’s a total joke,” Clinton said. “It’s meant to point out that that’s the unilateral explanation for everything that’s wrong with America.”
He added, “You know we all need to lighten up here, have a little sense of humor.”
Sanders ripped into Bill Clinton on Twitter later Friday, tweeting, “We should be encouraging young people to get involved in politics, not disparaging them. This seems to be a pattern.”
And Sanders campaign manager Jeff Weaver told CNN’s Anderson Cooper Friday that Democratic leaders should be careful about driving away the young voters who are supporting his bid.
“For people who are sort of in the Democratic establishment to disparage those young people, their sincerity and their knowledge, really is not a very smart strategy to try and build the Democratic Party,” Weaver said.
Hillary Clinton’s campaign had no comment, a spokesman told CNN.
Bill Clinton’s comments come just a day after the most contentious Democratic debate yet, in which Sanders hammered Hillary Clinton for her speeches to large banks. Clinton fired back, pointing to a Sanders interview with the New York Daily News to argue that he would let the big banks decide for themselves whether they should be broken up.
His remark Friday is the latest in a series of statements he’s made that have received attention on the campaign trail. Last week, he suggested there were “different standards” regarding gender in the ongoing debate between his wife and Sanders over who is more qualified to be president.
Days earlier, he got into a fiery exchange with Black Lives Matter protesters over a comment Hillary Clinton made in the 1990s when she called young people who commit violent crimes “super predators.”