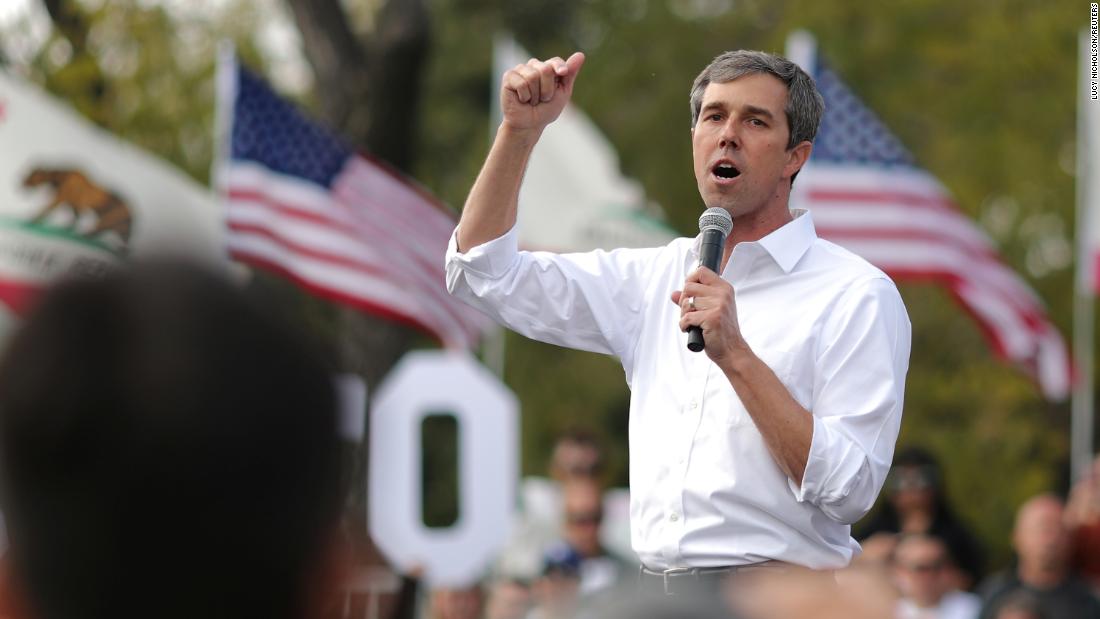 (CNN)First things first: The theme song of the week is the closing credits from the television show Full House.

What’s the point: When O’Rourke jumped into the race in mid-March, he had a boost of momentum. O’Rourke got a high number of Google searches (indicating interest in his candidacy). He raised about $6 million in his first 24 hours. Finally, he hit double-digits in a number of national polls, including CNN’s and Quinnipiac University’s.
Since that point, however, O’Rourke’s support has declined considerably. He’s running sixth in Google searches over the last 30 days behind Biden, Sanders, South Bend, Indiana, Mayor Pete Buttigieg, California Sen. Kamala Harris and Massachusetts Sen. Elizabeth Warren. His fundraising has slowed, reports say. Indeed, his fundraising may not have been as strong as initially thought. Some of the money he raised on day one could only be used for the general election. His average daily fundraising haul was considerably less than Sanders in the March days following day one of his campaign.
You can see O’Rourke’s struggles most clearly in the polls. In an average of national polls taken since Biden entered the race, O’Rourke has fallen to just below 5% support. That’s the lowest he has been since at least December.
But it’s not just that O’Rourke has seen his numbers decline nationally — it’s that his polls look even worse in the early caucus and primary states. I could not find a single poll in Iowa, New Hampshire or South Carolina conducted after Biden entered in which O’Rourke polled above 3%. These, of course, are the states that O’Rourke has been visiting over and over again throughout the last few months. It apparently hasn’t done any good.
The internal data in the polls don’t necessarily look any better. Monmouth, for example, asked New Hampshire Democratic primary voters whether they have a favorable or unfavorable view of the different Democrats running for president. O’Rourke isn’t unpopular, with a 45% favorable to 16% unfavorable rating. But relatively, he’s more unpopular than other Democrats running. Among those candidates for whom at least 50% of the voters had an opinion, O’Rourke ranked seventh out of nine for favorable to unfavorable ratio. Buttigieg, who had the same name recognition as O’Rourke, had a 54% favorable rating. Compare that to O’Rourke’s 45% favorable rating.
One contributing factor in O’Rourke’s drop is that the news media doesn’t seem anywhere near as interested in him as they once were. O’Rourke received more coverage on cable news during the last week of March than any announced candidate, according to a FiveThirtyEight analysis. Since that point, O’Rourke’s coverage has dropped. The past four weeks, he was mentioned 221 times, 155 times, 162 times and 136 times. That was usually good enough for fifth or sixth place.
Looking at places, though, undersells O’Rourke’s media troubles. This past week, Biden’s name was mentioned 20 times as often on cable news as O’Rourke’s. The week before it was 22 times as often.
And it’s not just less media: The stories seem to be more negative on O’Rourke than they once were.
Lack of good media oxygen is damaging to any campaign. When donors and voters are trying to decide between more than 20 candidates, being at the top of their minds is important.
For O’Rourke, good media attention — like his “born to run” Vanity Fair cover — is probably even more important than it is for other candidates. There’s no real defining feature that sets him apart from the field to keep him at the top of people’s minds. O’Rourke’s not full of policy proposals like Warren. He wouldn’t be the first gay president like Buttigieg or the first woman president like other leading contenders such as Harris or Warren. O’Rourke’s a white guy in a country that has in every election but two — 2008 and 2012 — elected a white guy to be president (Hillary Clinton, of course, won the popular vote in 2016).
If O’Rourke’s going to improve his standing moving forward, he’ll likely need one of two things to happen: a standout moment in the primary debates and/or setting himself apart through retail campaigning in the early states. If those happen, they’ll help improve his polls, which in turn will help bring in more money and media attention.
The problem, of course, is that pretty much every other candidate will be hoping to do the same thing.